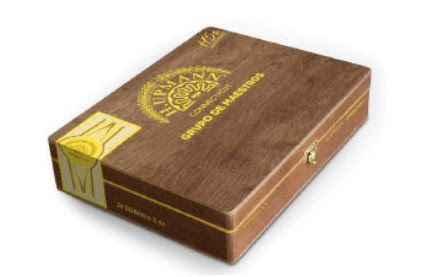 2019 will mark the 175th of H. Upmann, the brand founded by Herman Upmann in Cuba and the 2018 IPCPR Trade Show, Altadis U.S.A. is releasing a cigar to commemorate the occasion called the H. Upmann Connecticut Grupo de Maestros. It’s a cigar that not only pays homage to the brand, but also has a very contemporary kick to it.

The H. Upmann Connecticut Grupo de Maestros is a cigar that was spearheaded by Altadis Director of Product Capability Rafael Nodal in conjunction with Altadis’ famed Grupo de Maestros team of cigar makers. The blend for the H. Upmann Connecticut consists of an Ecuadorian Connecticut-seed wrapper over a Dominican binder and filler. The cigar is finished with a maduro cap. Production is out of the Dominican Republic at the Tabacalera de Garcia factory in La Romana.

The cigar is also intended to be a bolder Connecticut Shade offering in the Altadis portfolio. According to a report by Cigar Aficionado, the boldness stems from the fact it contains Pilotico tobacco. It’s a seed varietal grown by the Mendez family that Altadis has used before – most notably on the Montecristo Pilotico Pepe Mendez.

The H. Upmann Connecticut will be available in four sizes: Robusto, Toro, Belicoso, and Churchill – each will be presented in 20-count boxes.

At a glance, here is a look at the H. Upmann Grupo de Maestros Connecticut: