Agile Cigar Reviews are cigar assessments where we use a lightweight, shorter format. These will never take the place of our comprehensive reviews. They are only used on blends we have previously assessed. This might be a blend we are re-scoring or giving a score for the first time or it might be a blend we are looking at in a different size. Today we look at the Camacho Powerband Robusto. This is a cigar line we previously assessed back in November 2016.

In 2015, Camacho Cigar released the second new cigar under its Master Built Series. Since Camacho rebranded itself under “the bold standard”, Camacho has presented many of its releases as bolder smokes in terms of flavor, body, and/or strength. With the Powerband, it’s a release that follows that pattern. It draws its inspiration from the “power, performance, and acceleration associated with the classic V-twin engine”. The name “power band” refers to the rpm range of an engine makes the most power. It is the point where one can feel the engine pulling the vehicle the strongest.  Back in November 2016, we took a look at the Camacho Powerband in the 5 x 50 Robusto size. Today we take another look at this size. The cigars used in this assessment have been aging for approximately 12 months in the Cigar Coop humidor.

There are two distinguishing characteristics about the Camacho Powerband. First, it is a cigar that is produced out of the Occidental factory in the Dominican Republic (it is actually the second Camacho to come out of this country following 2015’s Camacho American Barrel Aged). Second, the cigar introduces a proprietary bunching technique when constructing the cigar. In the end, it facilitates the process of delivering superior construction while bringing out the best in the boldness and flavor of the cigar. 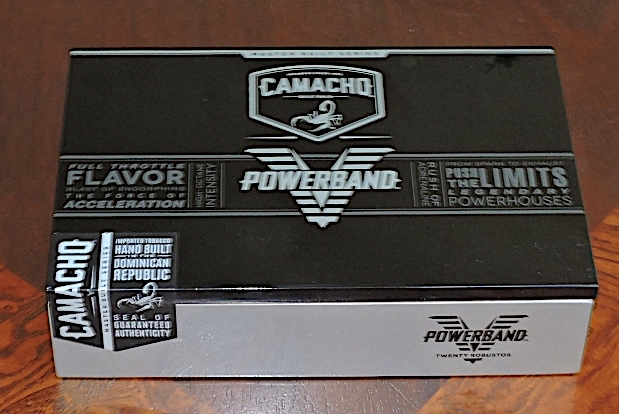 As for the blend, the Camacho Powerband uses a blend consisting of a Habano 2000 wrapper from Ecuador, a Mexican San Andres binder, and fillers from the “Big Three” countries (Honduras, Nicaragua, and the Dominican Republic). The filler also features Corojo – a staple of the Camacho brand. 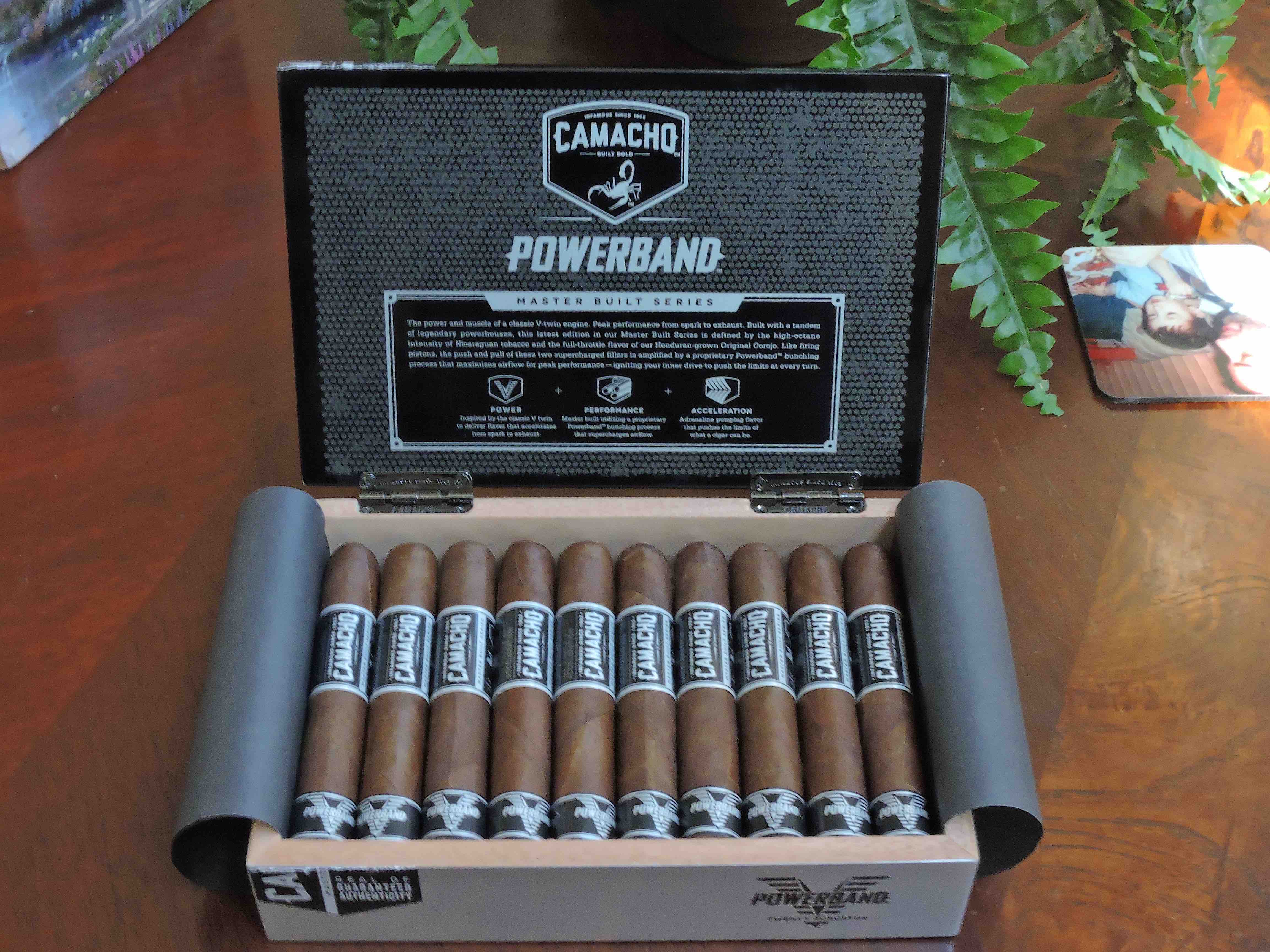 There was also a tubo release for the Camacho Powerband Robusto. The cigars for this assessment did not use the tubo packaging. 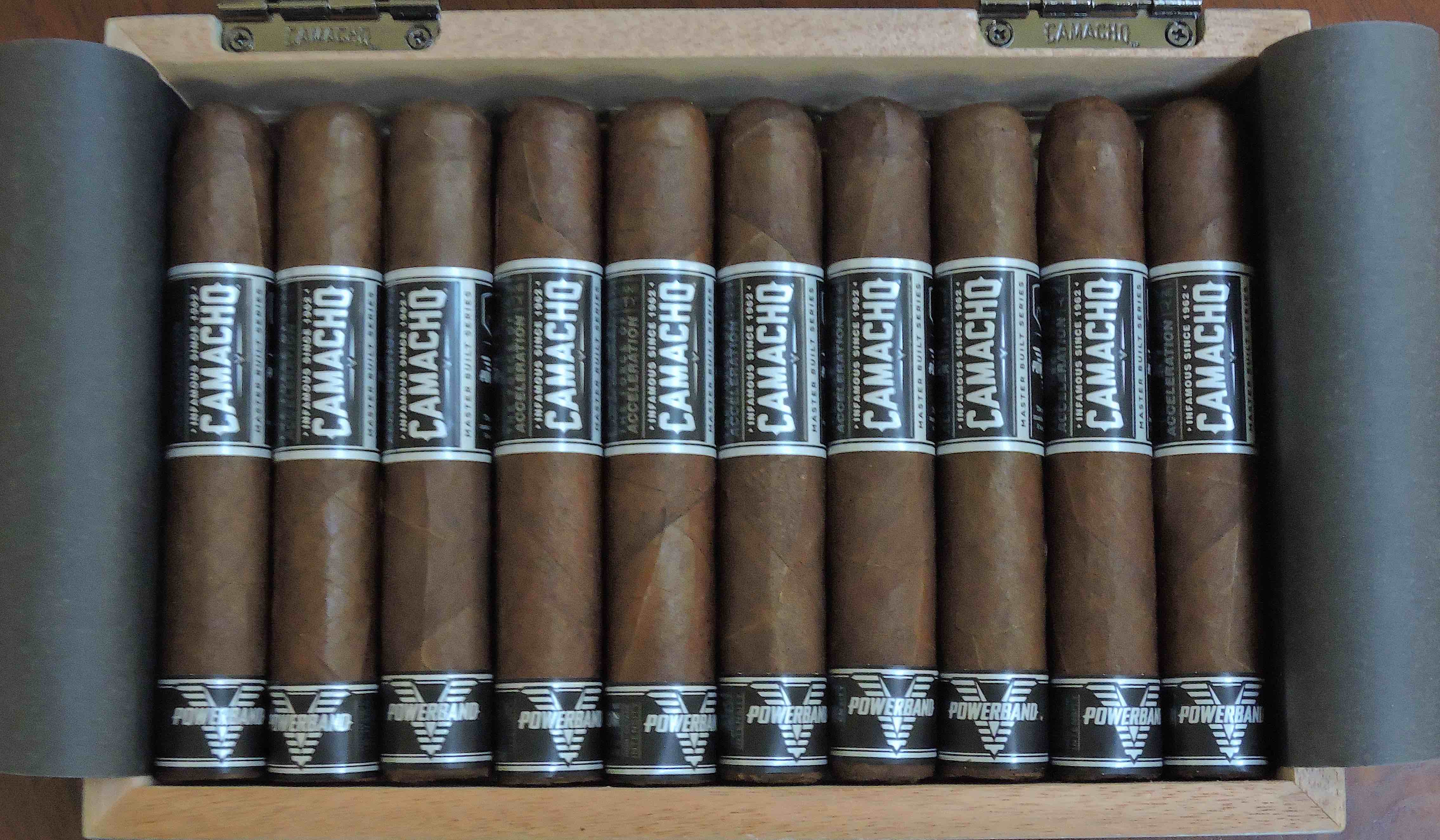 The Camacho Powerband Robusto delivers a flavor profile of cocoa, earth, lemon citrus, and white pepper. Early on the cocoa notes were prominent on the draw, while the lemon citrus notes were more prominent on the finish. The earth and pepper notes start out in the background. By the midway point, the earth notes emerged as the primary note. By the last third, the pepper notes increased in intensity. The strength and body of the cigar started out medium to full and by the last third, both attributes progressed into the full range. Both the strength and body balance each other nicely with neither attribute overshadowing the other.

With twelve months of age, for the most part, the Powerband holds the boldness that I came to expect from this cigar. The strength and body are not overpowering, but at a level high enough to satisfy those who want a cigar with some kick. While not the most complex of cigars, it’s still a cigar that delivers an enjoyable profile. Given this is a bolder smoke, it’s one I’d recommend for an experienced cigar enthusiast. At $11.00, this cigar still carries a premium; but under our new value system introduced in 2018, it’s still a cigar worthy of buying one to enjoy.