For the second consecutive year, the International Premium Cigar and Pipe Retailers (IPCPR) Association surveyed its retail members on sales conducted the week before Christmas. According to the survey results, IPCPR reported an increase from the previous year in sales traffic and sales volume in its brick and mortar locations, but a decrease in consumer spending.

The survey was based on sales activity conducted by tobacconists during the week of December 18 through December 24. There were three questions on the survey:

The survey results showed that 60% of tobacconists reported an increase in sales volume from the previous year – up from 55$ the following year. 58% of tobacconists reported an overall increase in store traffic – up from 45% the following year.
Last January IPCPR gathered the same data comparing the sales week of Dec. 18-24, 2017 versus 2016. The 2017 holiday sales survey indicated 55% of retailers increased their sales volume over the same period in ’16.

Meanwhile, 47% reported an increase in spending (down from 53% the following year) while 20% reported a decrease in customer spending (up from 11%) 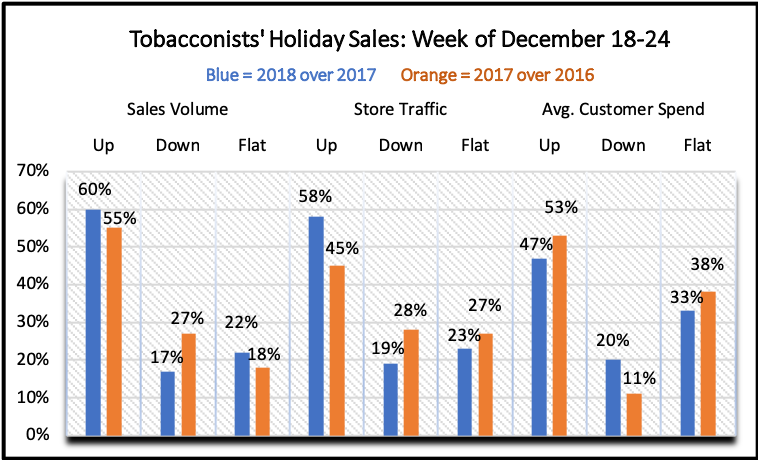 “It is interesting to note how total sales volume increased for a majority of our members while they simultaneously experienced lower per customer spends,” added Scott Pearce, IPCPR Executive Director. The increased sales volume seems to be driven by a slight uptick in store traffic.”

In 2017, the IPCPR also surveyed retailers during the Thanksgiving weekend period, but this year no such data was reported.