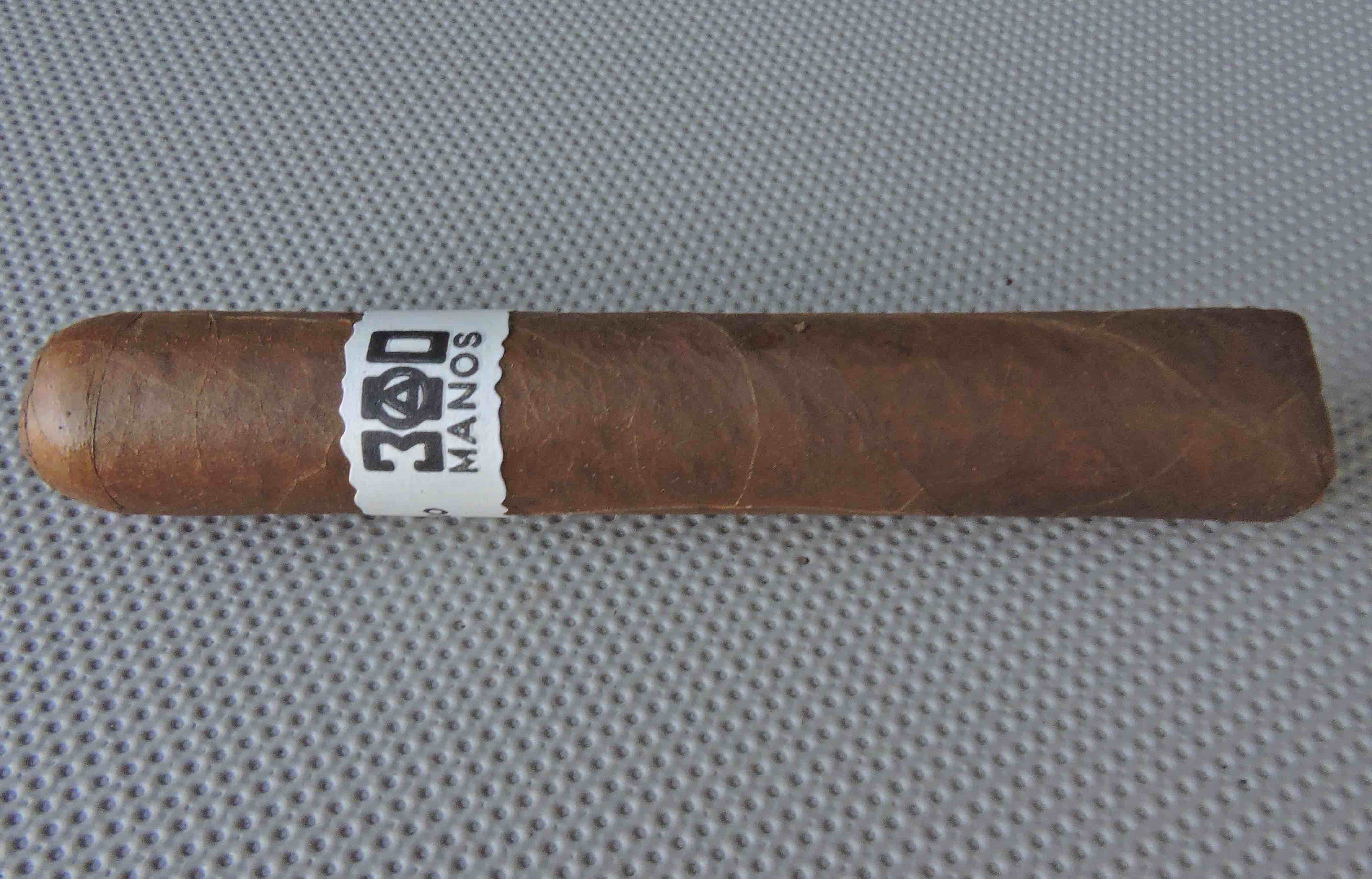 Just before the 2018 IPCPR Trade Show, Robert Holt and Southern Draw Cigars announced a new value-priced brand known as 300 Hands. The 300 Hands name pays homage to the people of Nicaragua involved in the 300 steps needed going from seed to store to deliver a hand-made premium cigar to the consumer. The people involved don’t just include those who work on the farms or in the factory, but also include the forgotten people such as repairmen and bus drivers. Because many people in Nicaragua live in poverty, Southern Draw Cigars set out to create a charitable angle where the company is donating 25% of the profits of 300 Hands to (according to Southern Draw) “those Nicaraguans that offered us their honest stories and identified specific needs in and around their own communities.” As for the cigar, there are two distinct blends – the 300 Hands Maduro and the 300 Manos Habano. Today, we take a closer look at the 300 Manos Habano in the Petit Edmundo size.

Charitable giving is not something new for Southern Draw, but rather something the company has incorporated into its philosophy and overall mission statement. The company has gone as far as producing a series of cards for the 300 Hands project that highlight the people involved with the project and their role in the process. 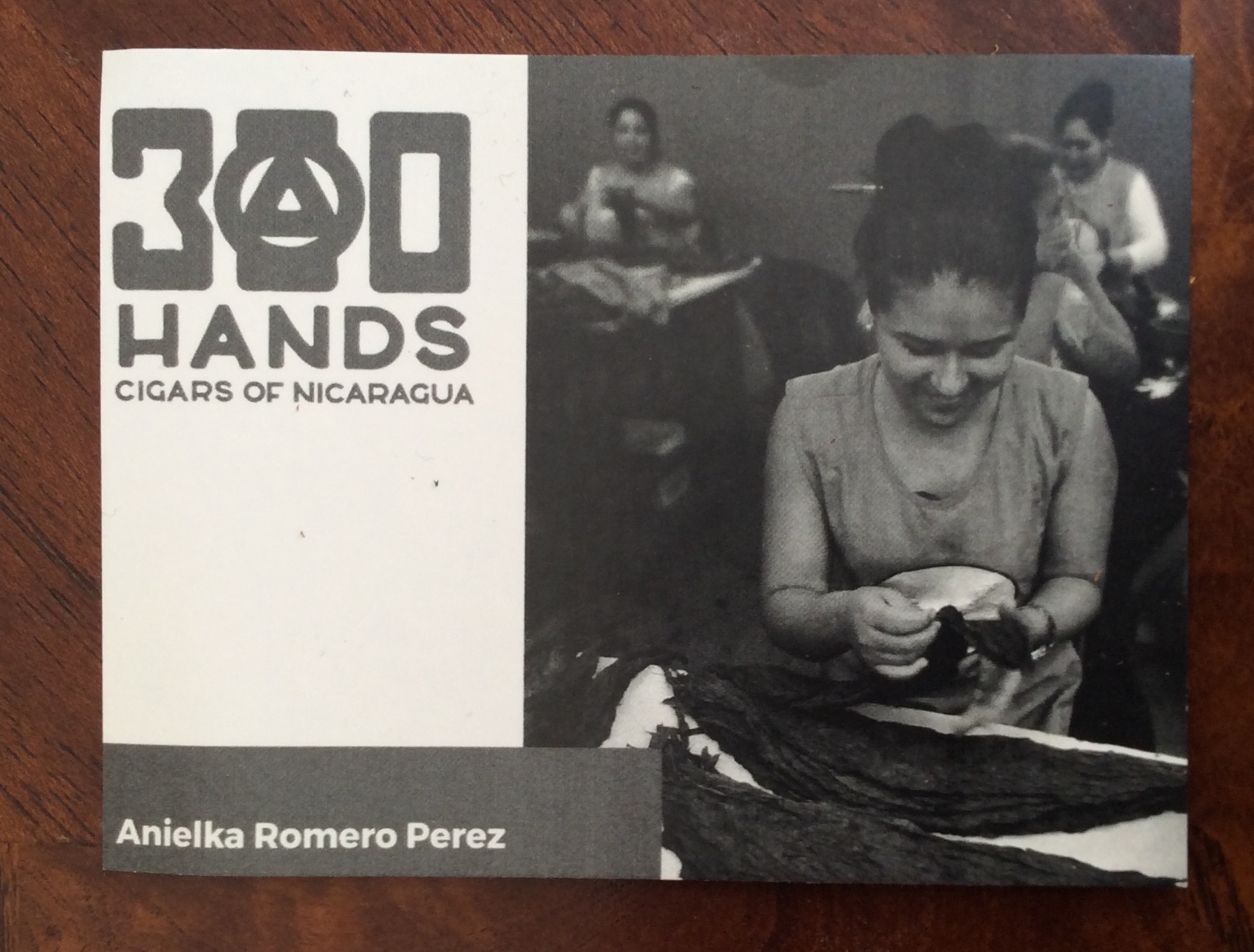 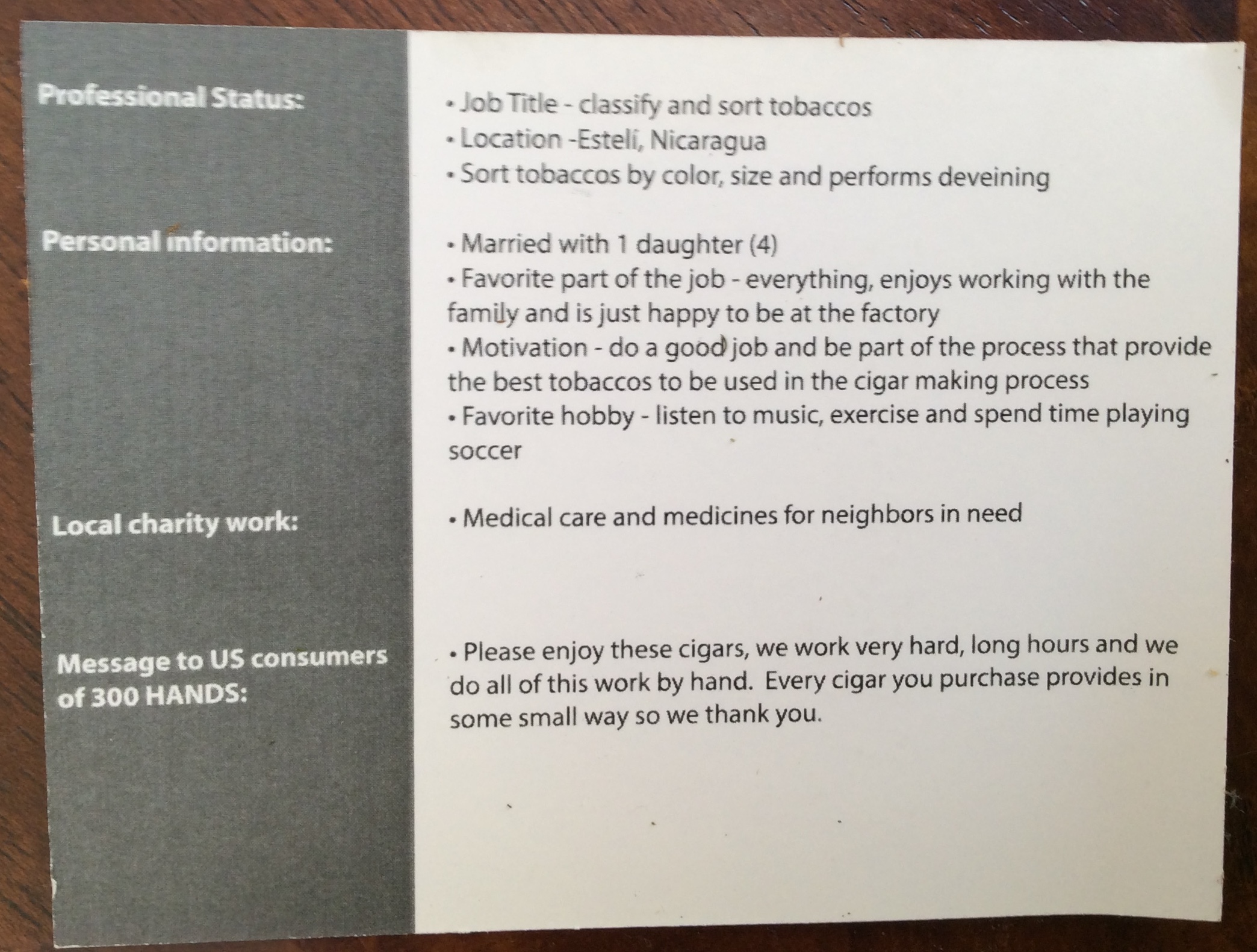 One thing that Holt did differently was he had a formal unveiling of his new cigars at the IPCPR Trade Show. The 300 Hands project was unveiled the second day of the trade show.

Now let’s break down the 300 Manos Habano Petit Edmundo and see what this cigar brings to the table.

The blend for the 300 Manos Habano is a multi-national one highlighted by an Ecuadorian-grown Habano wrapper. 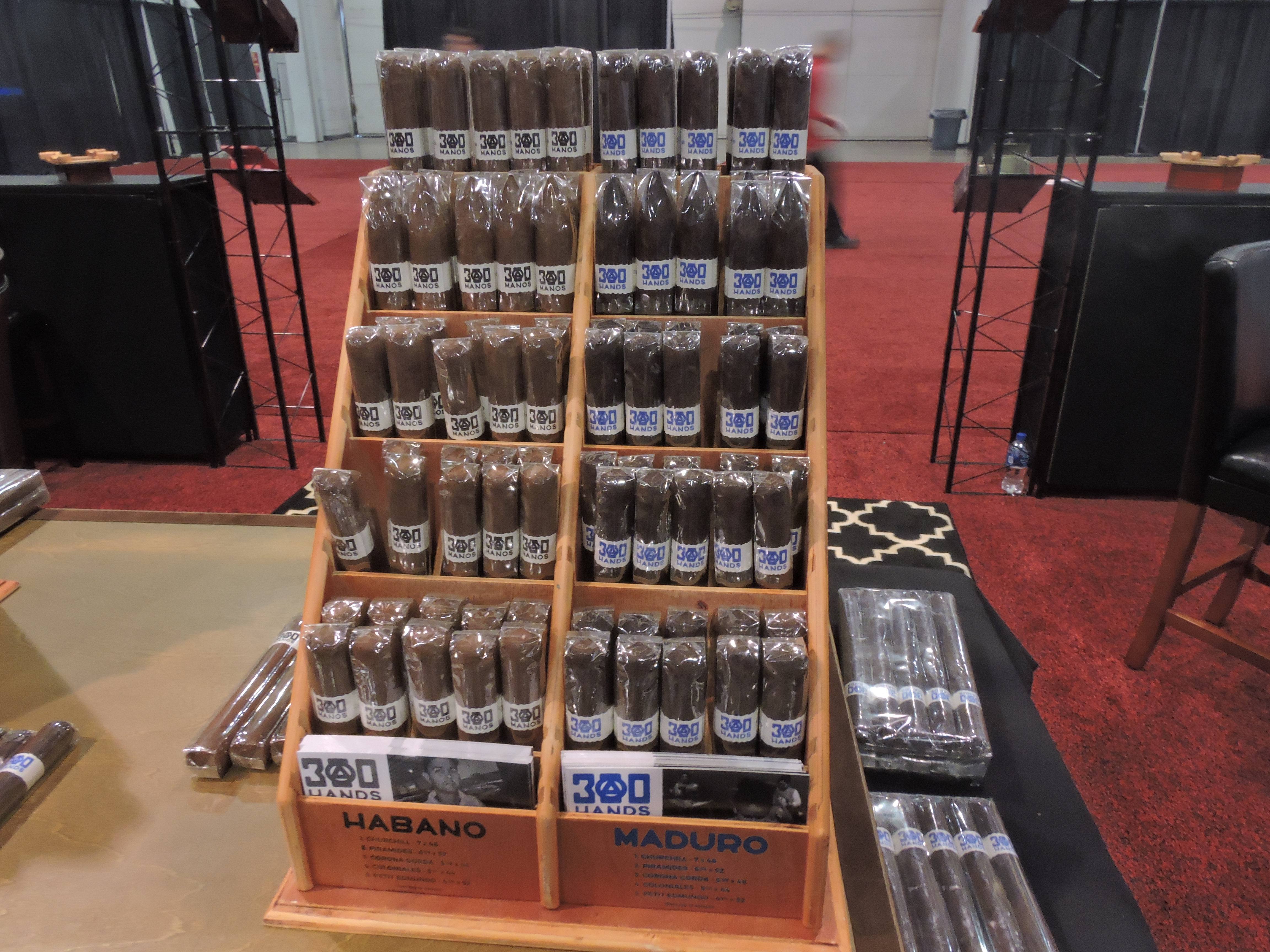 The band of the 300 Manos is white with black font. The center of the map contains the text “300 MANOS” with a triangle in the middle of center “0”. The left side of the band contains the text “HABANO” while the right side contains a map of Nicaragua. A white stripe crosses the map with the text “PUROS DE NICARAGUA” on it. The upper and lower part of the band is finished with a perforated pattern.

A straight cut was used to remove the cap of the 300 Manos Habano Petit Edmundo. Once the cap was detached, it was time to commence the pre-light draw. The dry draw delivered natural tobacco, earth, bittersweet cocoa, and floral notes. This was a satisfactory pre-light draw. At this point, it was time to light up the 300 Manos Habano Petit Edmundo and see what the smoking experience would have in store.

The start of the 300 Manos Habano Petit Edmundo started with a quick spurt of black and red pepper. This gave way to notes of sweet natural tobacco, wood, cream, pepper, and coffee bean. Early on the sweet natural tobacco moved into the forefront. The natural tobacco was more of a compound note as it had qualities of cocoa, caramel, and floral mixed in. Meanwhile the cream, wood, pepper, and coffee bean notes settled in the background. On the retro-hale, there was an additional layer of black and red pepper.

Just past the midway point, the pepper notes slightly increased in intensity while the wood and coffee bean remained in the forefront. Concurrently, the creaminess dissipated from the forefront. By the last third, the wood notes subsided leaving the coffee bean as the primary note. By this time the pepper notes were the ones closest to the forefront. The natural tobacco and wood notes remained more distant. This is the way the 300 Manos Habano Petit Edmundo came to a close. The resulting nub was slightly soft to the touch and cool in temperature.

The burn line of the 300 Manos Habano Petit Edmundo was relatively straight. However, this cigar had a tendency to meander from time to time. This resulted in some additional touch-ups required above the norm. The resulting ash had a salt and pepper color and was on the firm side. As for the burn rate and burn temperature, both were in the ideal range. 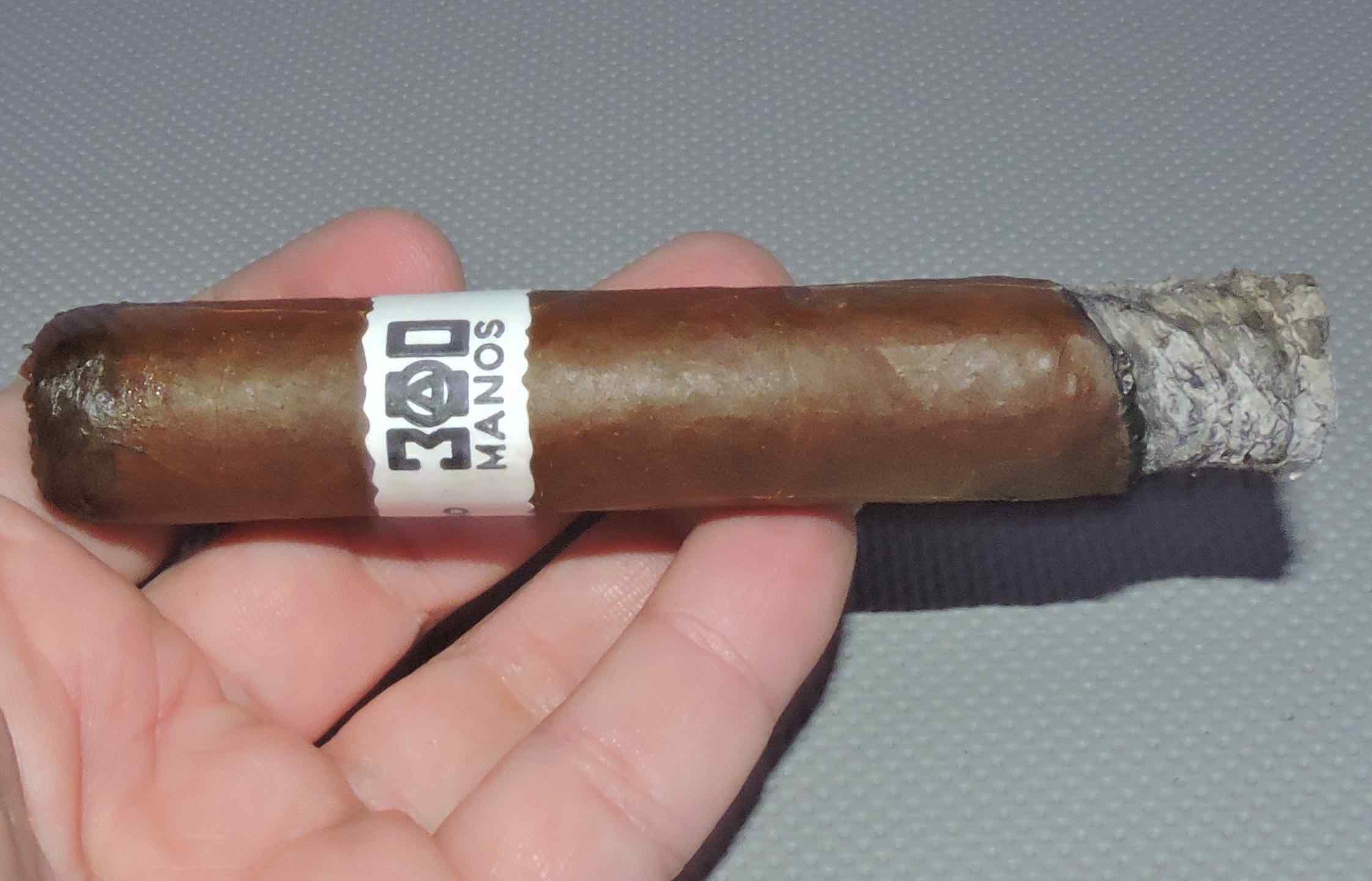 When it came to the draw, the 300 Manos Habano Petit Edmundo performed quite well. This cigar had a touch of resistance which is something that I like. At the same time, this was a low maintenance cigar to derive flavor from.

When it came to strength and body, I found the 300 Manos Habano Petit Edmundo had a little bit of a kick. This is a cigar that comes out of the gate with medium strength and medium body. Along the way, I didn’t find much variance in the intensity levels and by the end of the cigar experience, the Petit Edmundo finished with both attributes in the medium to full range.

In terms of strength and body, both attributes balanced each other nicely with neither overshadowing the other.

If there is one thing that Robert Holt has been successful at, it’s delivering a very good value priced cigar. Over the years, this has been evidenced with Southern Draw’s QuickDraw line. Holt strikes lightning again with the 300 Manos Habano Petit Edmundo. For a cigar priced under $6.00, this cigar delivers a high-quality smoking experience. This cigar has some nice subtle complexities, and it’s a cigar that each time I smoke it, I seem to get a little more out of it. This cigar that will satisfy an experienced cigar enthusiast and is also a nice cigar for the novice to progress to something in the medium to full territory. As for myself, the 300 Manos Habano Petit Edmundo is a cigar that I would smoke again, and it’s worthy of having multiples in the humidor.