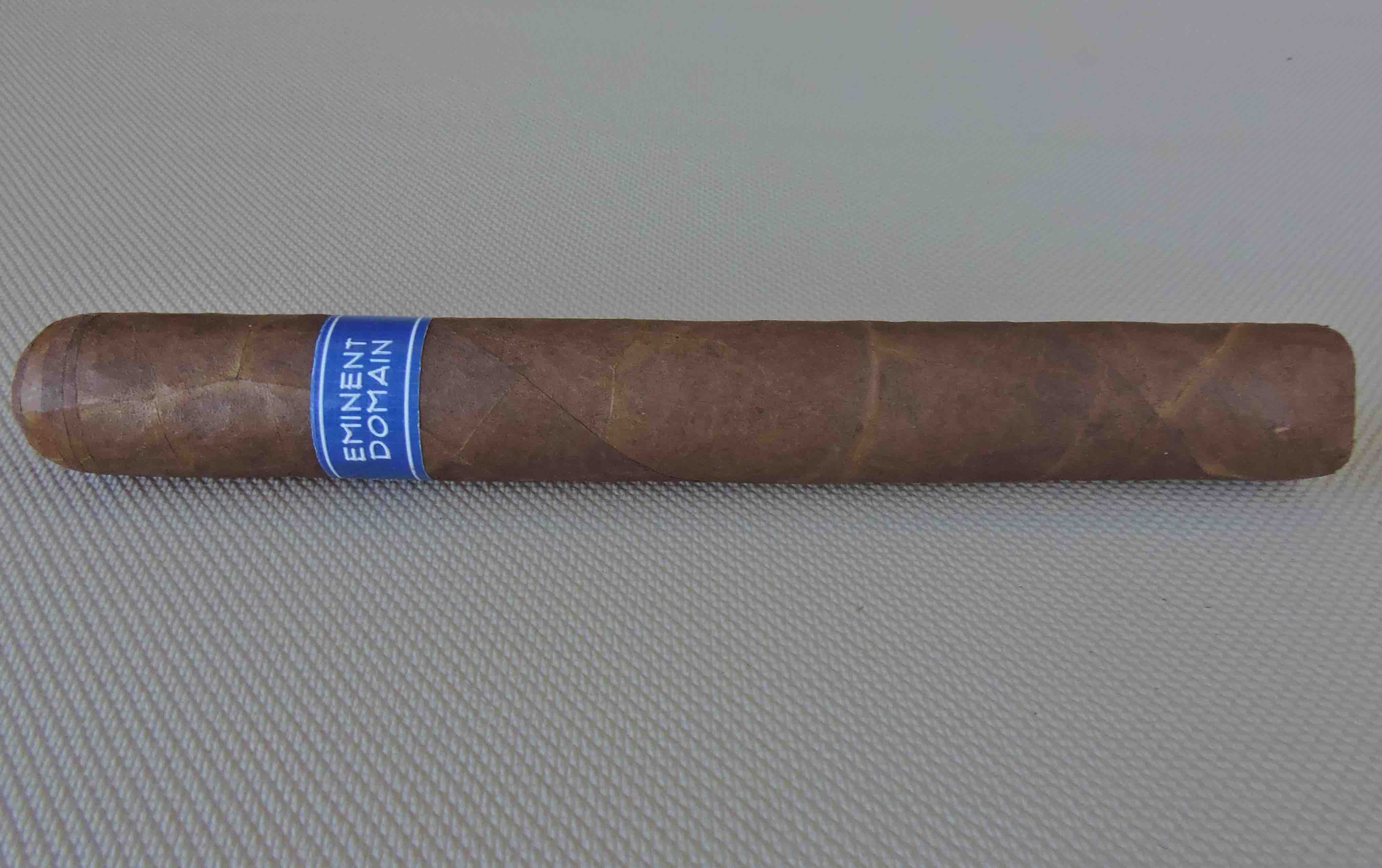 Back in 2014, Espinosa Cigars launched a new series of cigars known as “The Backroom Series.” It is a series of cigars that have been exclusively offered to Espinosa Cigars branded-lounges. The first cigar in that series was known as “The Alibi,” a Habano Oscuro-wrapped blend in one size – a 6 x 48 Short Churchill. Fast forward to 2016, and Espinosa announced the expansion of the Back Room Series to a total of 9 cigars. These cigars were released on a very limited basis to the lounges, but one of those cigars was put into a more widespread distribution to the lounges – and that cigar is one called Eminent Domain. Today we take a closer look at the Eminent Domain release. 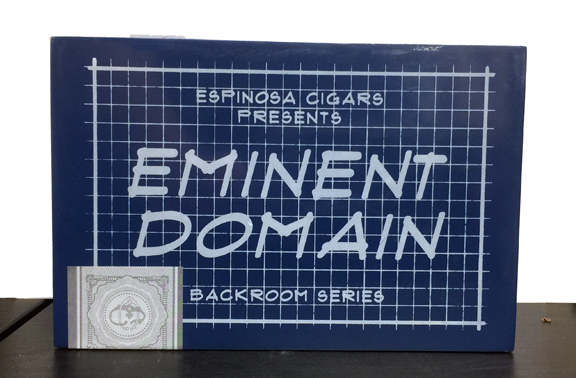 The listing of the cigars that were released as a part of the Backroom Series include:

Two of the cigars that are listed above have become regular ongoing productions by Espinosa Cigars, the Reggae and the Wasabi. However, both Alibi and Eminent Domain are releases that have remained in the hands of the Espinosa-branded lounges.

Without further ado, let’s break down the Espinosa Eminent Domain and see what this cigar brings to the table.

The Alibi will be available in one size – a 6 x 50 Toro. The cigar is packaged in ten-count boxes. 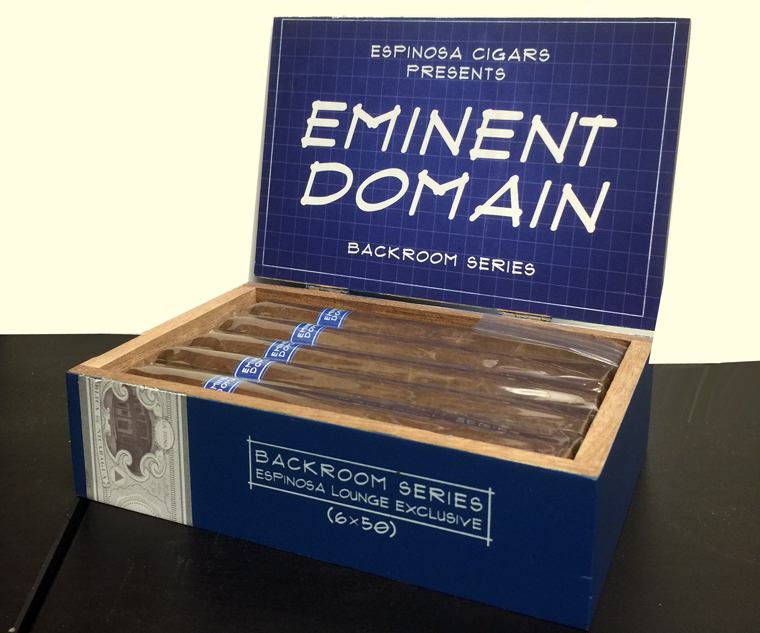 The Espinosa Eminent Domain’s Habano wrapper has a nice Colorado reddish hue to it. There wasn’t much in the way of oil on the surface of this wrapper. Any visible wrapper seams were minimal. While there were some visible veins, the wrapper was relatively smooth.

The band to the Eminent Domain is blue in color with white font and trim. On the center of the band is the text “EMINENT DOMAIN.” To the left of that text is the text “ESPINOSA LOUNGE EXCLUSIVE.” To the right of the center is the text “BACKROOM SERIES” and the Espinosa logo.

A straight cut was chosen to commence the cigar experience of the Espinosa Eminent Domain. Once the cap was removed, it was on to the pre-light draw ritual. The cold draw delivered a mix of dusty earth and cedar. While this was a simple flavor profile on the pre-light draw, it was quite satisfactory. At this point, it was time to light up the Espinosa Eminent Domain and await what the smoking phase would have in store.

The Espinosa Eminent Domain commenced with notes of cedar, earth, natural tobacco, and a mix of white and black pepper. Early on the earth and natural tobacco notes became the primary flavors. Both of these notes alternated in intensity. Meanwhile, the cedar and pepper settled into the background on the tongue. There was an additional layer of white and black pepper present on the retro-hale.

During the second third, the natural tobacco took a slight edge over the earth notes. The cedar notes started to commence on a gradual, but steady increase during this stage. Once past the midway point, the pepper notes went up a slight notch as well.

By the end of the second third, the cedar notes took over as the primary note. The pepper notes were a close second. While there was more in the way of spice, this cigar wasn’t a “spice bomb,” but rather had a “bite” to it. At the same times, the natural tobacco and earth notes remained in the background and rounded off the flavor profile nicely. This profile continued into the final third. By the time the Eminent Domain came to a close, the resulting nub was slightly soft to the touch and cool in temperature.

Overall the Eminent Domain was a well-constructed cigar, and this was reflected on the scores of the burn and draw. The Eminent Domain maintained a relatively straight burn line and straight burn path from start to finish. The resulting ash had various shades of gray in it. It had a firm and tight ash. Meanwhile, both the burn rate and burn temperature were ideal. 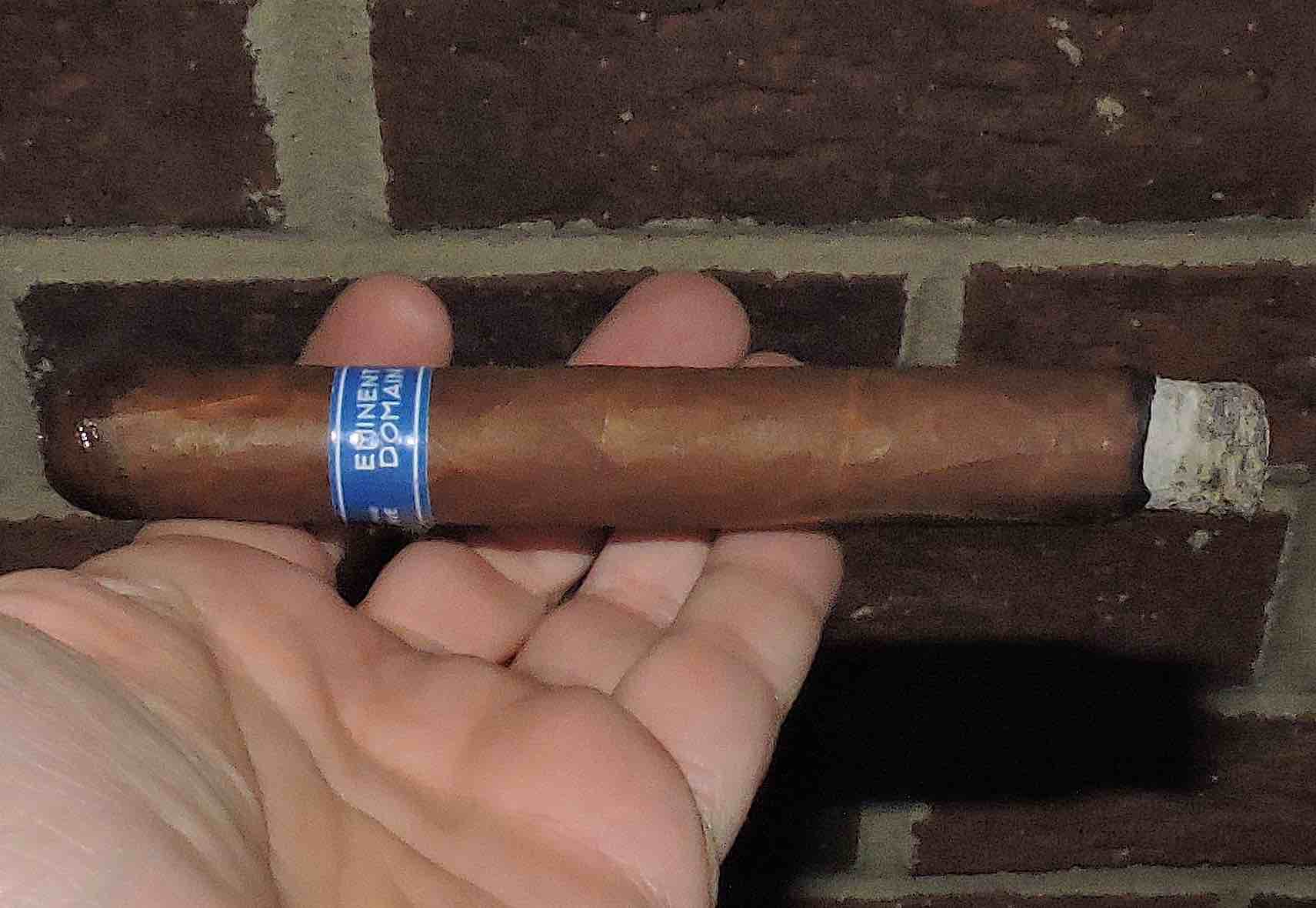 Burn of the Espinosa Eminent Domain

As for the draw of the Eminent Domain, it performed very well. It had a touch of resistance the right level for my comfort zone. At the same time, it was relatively easy to derive flavor from this cigar.

The Espinosa Eminent Domain delivered a medium strength, medium-bodied smoke from start to finish. There was a slight increase in intensity of both attributes along the way, but in the end, the Eminent Domain held to the medium range of the spectrum. Throughout the smoking experience, both the strength and body balanced each other nicely with neither attribute over-shadowing the other.

One thing that I like about the Espinosa Backroom Series is how for each of the cigars, there has been something for everybody in the series: Reggae offers a chance to enjoy a blend with Jamaican tobacco; Wasabi offered a unique candela in a box-pressed format, and Alibi is a more traditional offering. Like Alibi, I would put Eminent Domain in the traditional category, but a cigar that is going to have the “bite” that Espinosa Cigars has become synonymous with. In the end, the Eminent Domain delivered a solid smoking experience – namely excellent flavor, great construction, and the right amount of complexity. I could recommend this cigar to either the novice or experienced cigar enthusiast. As for myself, while I still prefer the Alibi, this is a cigar I would also pick up when visiting the Espinosa lounge.