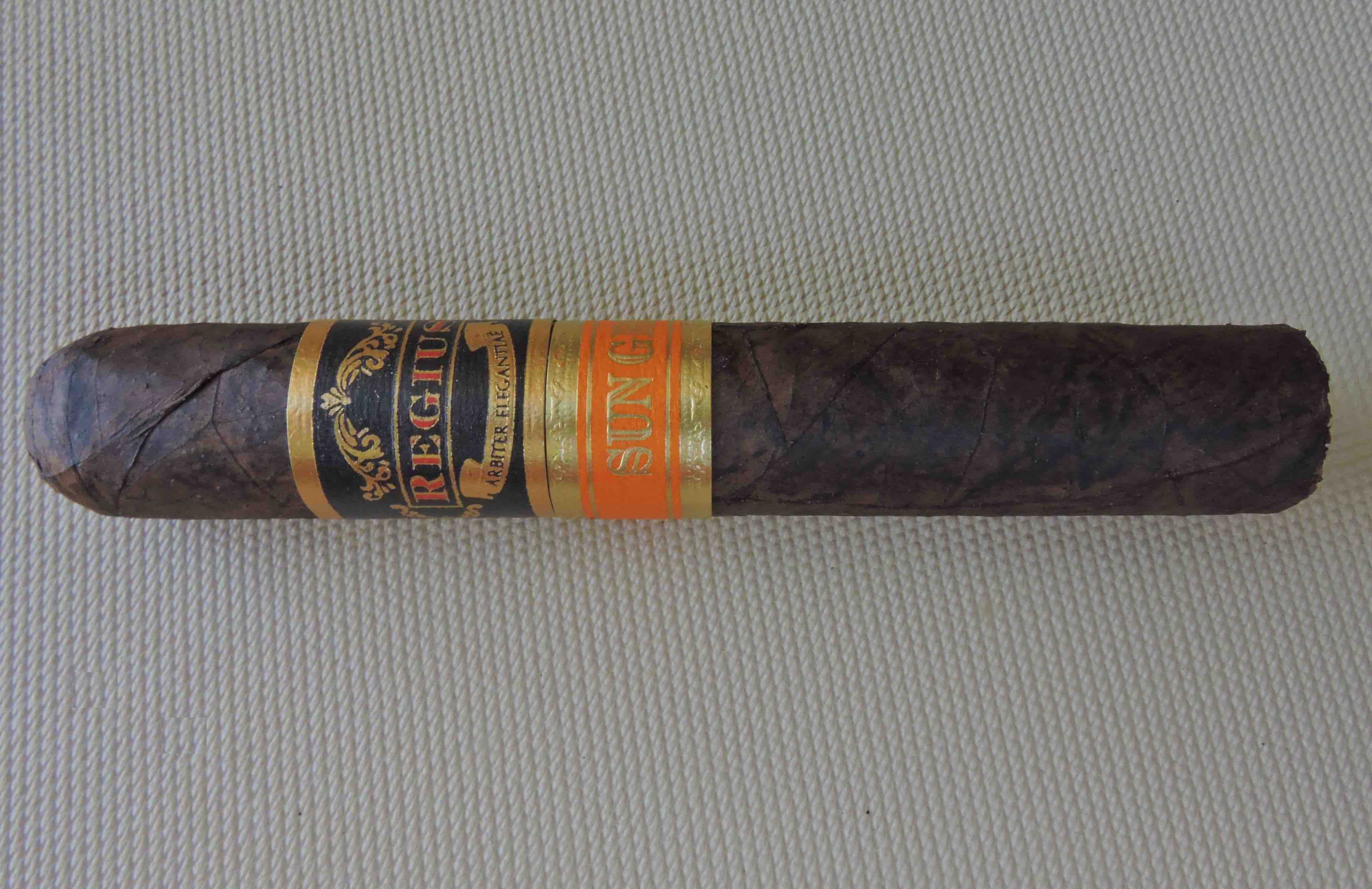 Regius Cigars was founded by Akhil Kapacee. After successfully launching the brand in the British market, Kapacee set his sights on the U.S. market in 2012. He would bring his Regius Black Label, a traditional (I’ll use the word Cubanesque) cigar that brings a cigar experience reminiscent to ones produced in Cuba. As he started expanding in the U.S., he released the three blends of the Regius Exclusive U.S.A. line. These were cigars exclusive to the U.S. market that combined bringing the traditional cigar experience that was successful with the Black Label and targeting the American consumer in mind in terms of shapes, sizes, and flavor profiles. With the widespread release of the Regius Connecticut, Regius Maduro, and Regius Sun Grown these cigars take the next step filling in the gaps of the portfolio and help Regius reach out to even a wider audience.

Without further ado, let’s take a closer look a the Regius Sun Grown Robusto and look at what this cigar brings to the table

The Regis Sun Grown is offered in five sizes – each is presented in 25-count cabinet style boxes.

The dark Nicaraguan wrapper of the Regius Sun Grown Robusto was an espresso bean color. Even with the dark color, some mottling could still be detected on the surface. On the other hand, the darker color minimized the visibility of any wrapper seams. This wrapper had a light sheen of oil on it. While there were some thin visible veins, the wrapper was still on the smoother side.

The primary band on the Regius Sun Grown is similar to what is used on the Regius Black Label line. The band itself has a black background with some gold trim. In the center of the band is the text “REGIUS” in red font with gold trim. There is a gold crown above the text and several gold-colored adornments on the band. Below the text is a gold ribbon with the text “ARBITER ELEGANTIE”. The far left of the band has the following initials in gold font in landscape mode “RB IF JT AF ST NP IO ID SD AI AK MP”.

The secondary band rests just below the primary band. This is orange with gold trim. On the center of the band is the text “SUN GROWN” in a large gold font.

A straight cut was used to remove the cap of the Regius Sun Grown Robusto. From that point, it was on to the pre-light draw stage. The dry draw delivered notes of chocolate, earth, and a slight pepper note. I considered this to be an excellent pre-light draw. At this point, it was time to light up the Regius Sun Grown Robusto and see what the smoking phase would have in store.

The Regius Sun Grown Robusto started with a short blast of white pepper. Once the pepper subsided, notes of earth, chocolate, and citrus emerged. The chocolate notes moved into the forefront during the early stages. The earth, pepper, and citrus settled in the background. Some red pepper blended in with the white pepper. This pepper combination was quite prominent on the retro-hale throughout the smoking experience. Toward the end of the first third, the earth notes joined the chocolate in the forefront.

During the second third of the Regius Sun Grown Robusto, the earth notes took over as the primary flavor. The chocolate gradually diminished in intensity during this stage. There was also an increase of the red and white pepper on the tongue. The citrus notes also remained in the background. Around the midway point, there was also a mineral note that surfaced in the background.

The final third saw the earth notes remain in the forefront. The pepper spices were the most prominent of the secondary flavors. There was still some citrus and mineral components present in the background – as well as an occasional chocolate note. This is the way the Regius Sun Grown Robusto came to a close. The resulting nub was firm to the touch and cool in temperature.

I found the Regius Sun Grown Robusto required some attention from my lighter in order to maintain a straight burn line and straight burn path. For the most part, the touchups did the trick, but there were more touchups than normal. The resulting ash wasn’t overly firm. It had a light gray color with some darker spots. The cigar had some minor flaking along the way as well. Meanwhile, the burn rate and burn temperature were both ideal. 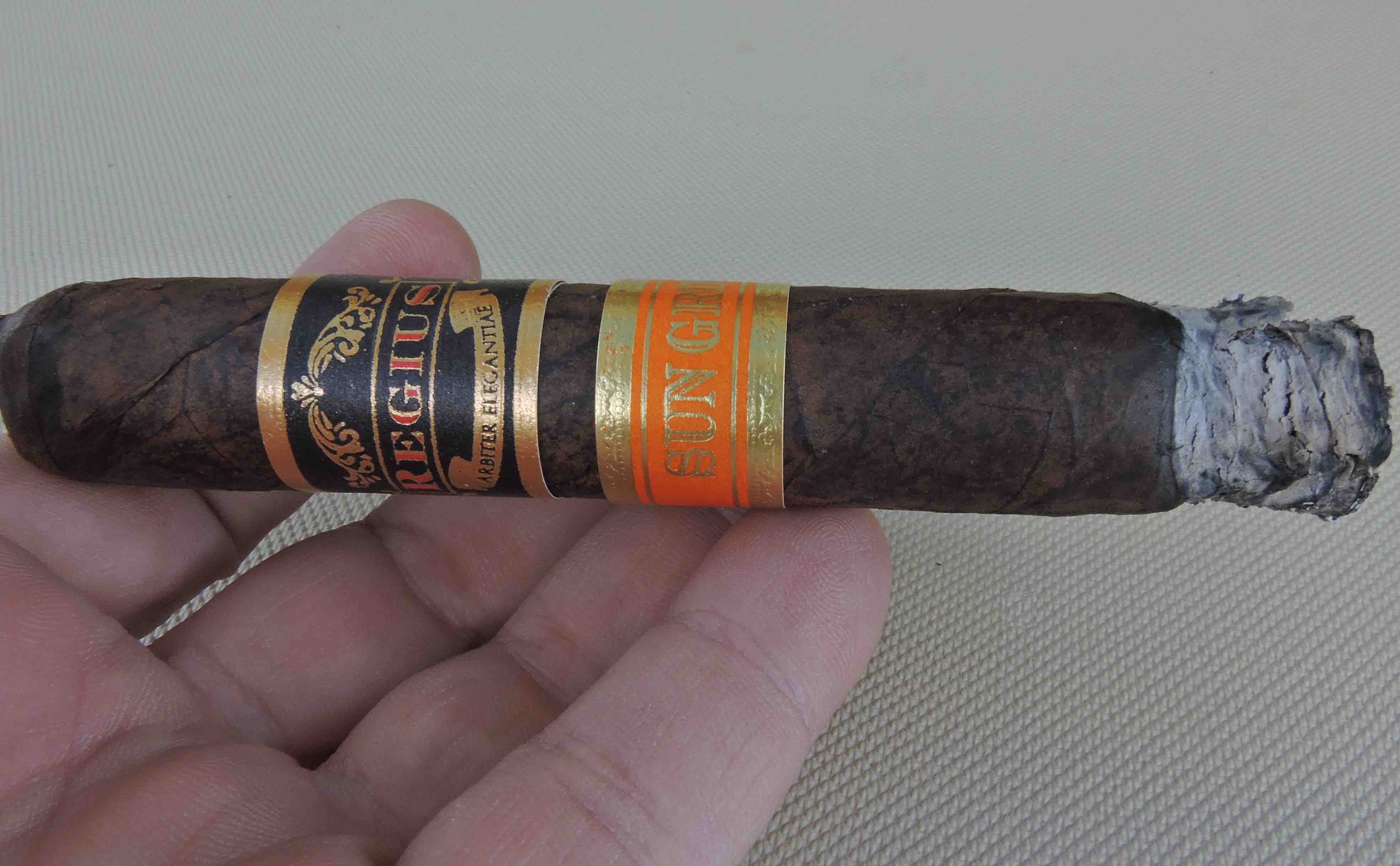 The draw of the Regius Sun Grown Robusto had a touch of resistance to it – which is something I consider to be ideal. At the same time, this was a cigar that produced ample amounts of smoke.

In terms of delivering a bolder smoke, the Regius Sun Grown Robusto has no problems accomplishing this goal. This is a cigar that delivered a medium to full strength cigar experience from start to finish. There wasn’t much in the way of variance of the intensity level of the strength along the way. When the retro-hale was factored in, I found the Regius Sun Grown Robusto to deliver a full-bodied experience from start to finish – with the intensity level a little higher at the beginning and final third.

When looking at strength versus body with the Regius Sun Grown Robusto, the body maintained the edge from start to finish.

Since landing in the U.S. market, Kapacee has done a tremendous job at delivering the traditional (again I’ll use the word Cubanesque) cigar experience to consumers. With the Regius Sun Grown, this is a cigar that goes in a very different direction as it brings the bold experience that Nicaraguan smokes are known for. In many cases, those who contend to have a bold Nicaraguan smoke sometimes fall short in the “bold” department. Not so much with the Regius Sun Grown, it not only delivers on boldness – it delivers on flavor. It shows Kapacee’s growth as a cigar maker. This bold smoke also helps Kapacee round out his portfolio and extend his reach.