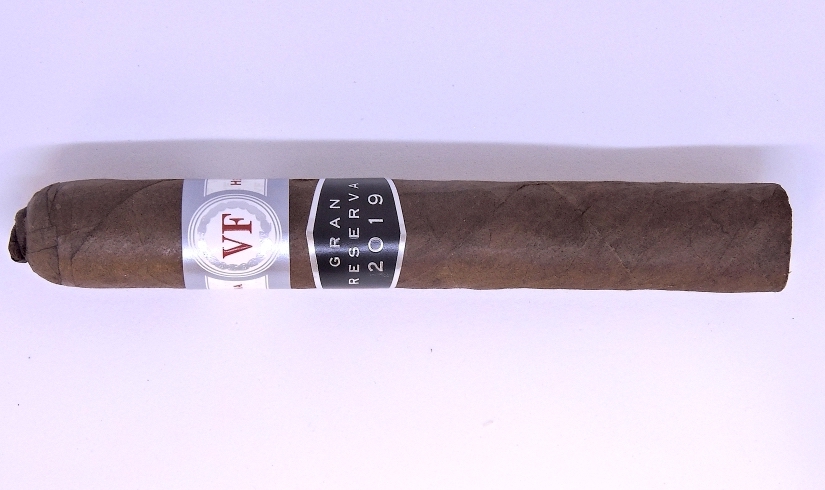 Like its predecessor the Gran Reserva 20 Aniversario; at press time the VegaFina Gran Reserva 2019 is only sold in the European market and was not available in the U.S.

Without further ado, let’s break down the VegaFina Gran Reserva 2019 and see what this cigar brings to the table.

The VegaFina Gran Reserva 2019 features a three-country multi-national blend highlighted by tobaccos that have been aged a minimum of five years. 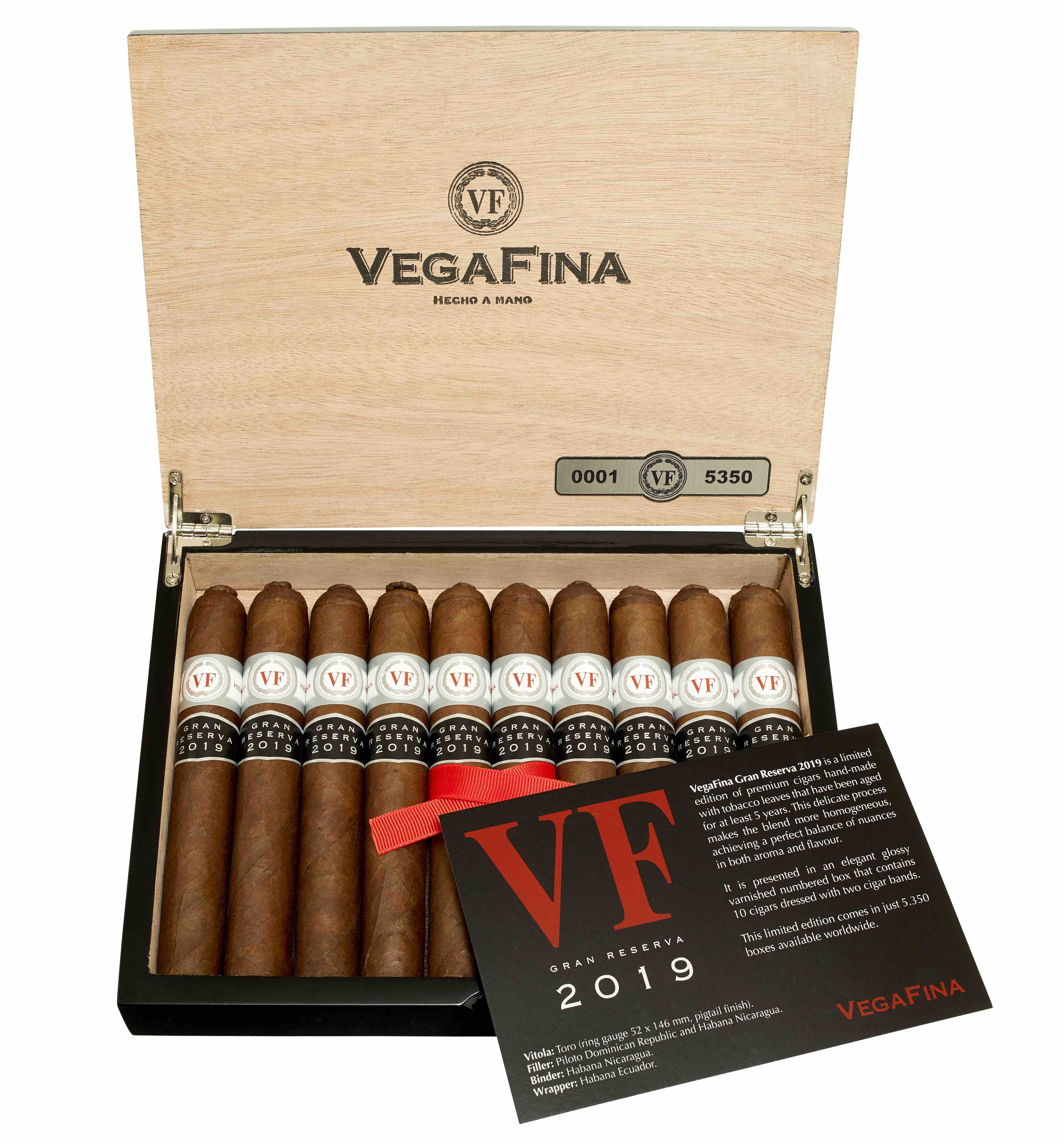 The Ecuadorian Habano wrapper of the VegaFina Gran Reserva 2019 had a medium brown color with a slight Colorado tint. This was a smooth wrapper that was somewhat oily. Any visible veins and wrapper seams were on the thin side. The Gran Reserva 2019 was finished with a bun-style pig-tail cap.

There are two bands on the VegaFina Gran Reserva 2019. The primary band has a white background with silver trim. On the center of the band is a red “VF” surrounded by a silver wreath which in turn is surrounded by a series of silver concentric circles. The left side of the band has the text “VEGAFINA” in red font while the right side has the text “HECHO A MANO” in red font.

There is a secondary band that is black with silver trim. On the center of the band is the text “GRAN RESERVA 2019” in silver font. On the left and right side of the band is a subtle red pin stripe pattern.

As opposed to pulling the spiral pig-tail off, a  straight cut was used to remove both the cap and pig-tail simultaneously of the VegaFina Gran Reserva 2019. From that point, it was time to move on to the pre-light draw. The cold draw delivered a mix of wood, earth, a slight natural tobacco note, and a slight black pepper bite. I considered this to be a positive experience on the pre-light draw. At this point, it was time to light up the VegaFina Gran Reserva 2019 and see what the smoking experience would have in store.

During the second third, some baker’s spice emerged with the pepper and cedar. At the same time, there was a gradual, linear increase of the baker’s spice. Concurrently there also was a slight increase in the pepper. Meanwhile, the natural tobacco component maintained its position in the forefront as well as its sweet flavors.

Toward the end of the second third, the baker’s spice joined the natural tobacco in the forefront. There was a nice synergy between the baker’s spice and pepper. The background still had notes of pepper and earth and to a lesser extent the cedar. This is the way the VegaFina Gran Reserva 2019 came to a close. The resulting nub was slightly soft to the touch and cool in temperature.

The VegaFina Gran Reserva 2019 had a slight curvature on the burn line, but the cigar maintained a straight burn path. This was a cigar that did not require excessive touch-ups. The resulting ash was light to medium gray with a few darker splotches. The ash itself wasn’t overly firm, but it was far from loose or flaky. Meanwhile, the burn rate and burn temperature were both ideal. 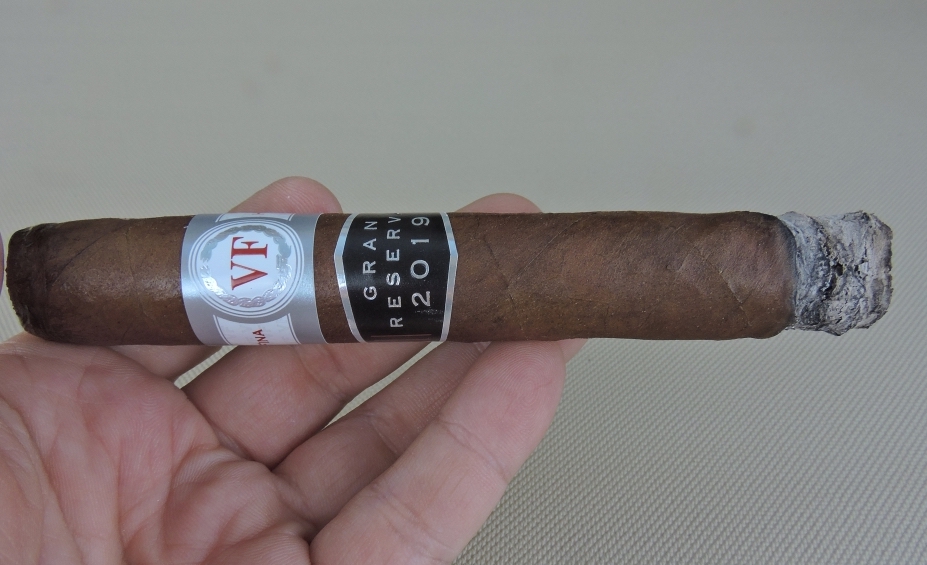 Burn of the VegaFina Gran Reserva 2019

The draw of the VegaFina Gran Reserva 2019 maintained a nice balance of openness and resistance. At the same time, this was a cigar that was low maintenance to derive flavor from.

The body of the VegaFina Gran Reserva 2019 started out medium. While there was a gradual increase in the body, it was at a much slower rate. By the end of the cigar, the Gran Reserva 2019 had more body, but was still in the medium range of the spectrum.

When it came to strength versus body with VegaFina Gran Reserva 2019, the body maintains an edge. However as the strength of the cigar increased, the gap between the two narrowed.

The bad news about this cigar is that it might be tough to find because its limited and only has been made available in Europe. Still, if you can find this cigar, it’s definitely worth of picking this up. It’s a cigar that will keep experienced cigar enthusiasts happy – and it’s a great cigar for the novice to move outside the milder range of cigars. As for myself, this is a cigar I’d smoke again – and I’d buy multiples of it.