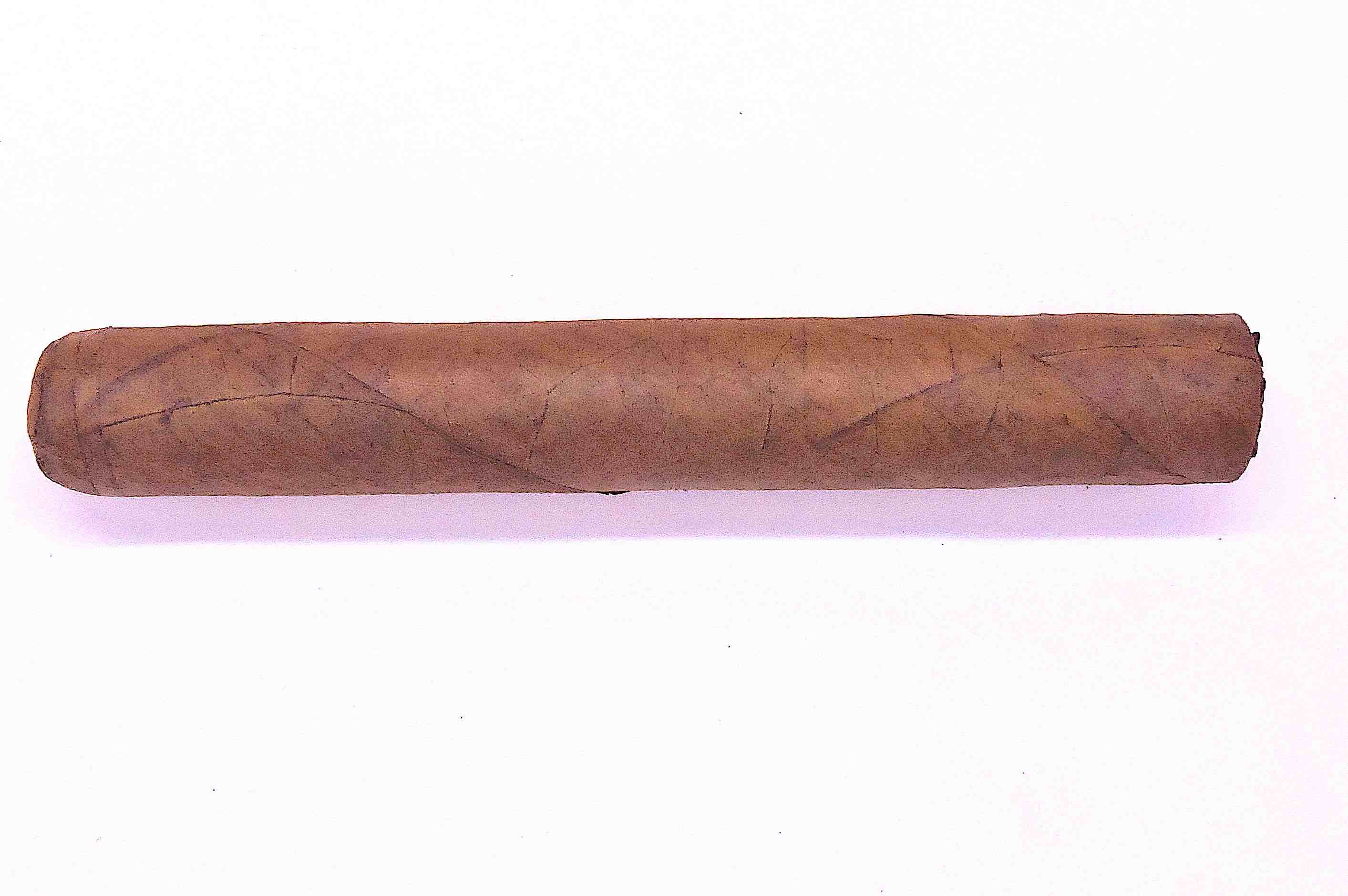 The past decade in the cigar industry has seen the growth of both small batch releases and private label brands. This past year saw Aganorsa Leaf combine both of these concepts in a release for Serious Cigars known as Ground N Pound. Serious Cigars is a retail chain based in Houston, Texas which in 2016 was acquired by Tabacalera USA and incorporated into the Casa de Montecristo family. Still operating somewhat as an entity within Casa de Montecristo, Serious Cigars has embarked on having its own small batch private label series called Seriously Small Batch. Aganorsa Leaf’s Ground N Pound would become the first installment of the Seriously Small Batch.  Today we take a look at one of the four sizes in Ground N Pound known as Elbow Candy (a Robusto Extra).

The explosion of small batch and private label releases often don’t involve creating blends to build a brand, but it involves creating brands and then finding blends that might be a good fit for the brand. Sometimes these cigars already exist in the factory and have never been released. In some cases, these blends have rare tobaccos and some do not.  Many times these cigars are packaged in mazos or bundles in order to keep the price competitive. Many will also have a theme associated with them. What categories Ground N Pound fall into are unknown, but one thing is clear – this is a strategy that is somewhat different for Aganorsa Leaf as most of the private labels Aganorsa Leaf has done have been extensions of their existing brands. One thing is clear the branding of Ground N Pound is something different for Aganorsa Leaf – its a little more edgy and to some extent a little more gimmicky.

When Ground N Pound was announced, the line was planned to consist of four sizes, each packaged in five-count bundles. Pricing was set at $44.95 to $49.95 MSRP. In reality, the pricing on Serious Cigars website is actually $20.00 less with pricing set between $24.95 to $29.95. Since Serious Cigars is the only retailer carrying Ground N Pound, it’s a little difficult to assess what the actual MSRP really is. I’ve seen this pricing strategy by many single store exclusive cigars, so this is not something unique to Serious Cigars. When we calculate our value rating at the end of the assessment, it will be based on the actual Serious Cigars pricing.

Without further ado, let’s break down Ground N Pound Elbow Candy and see what this cigar brings to the table.

The tobacco components for Ground N Pound consist of all-Nicaraguan tobaccos highlighted by a Corojo wrapper.The farms and seeds of the tobaccos are not disclosed.

Ground N Pound is available in four sizes – each is packaged in 5-count bundles. Serious Cigars has said there is a production of 300 packs per size and that Ground N Pound is meant to be a one-time limited release. 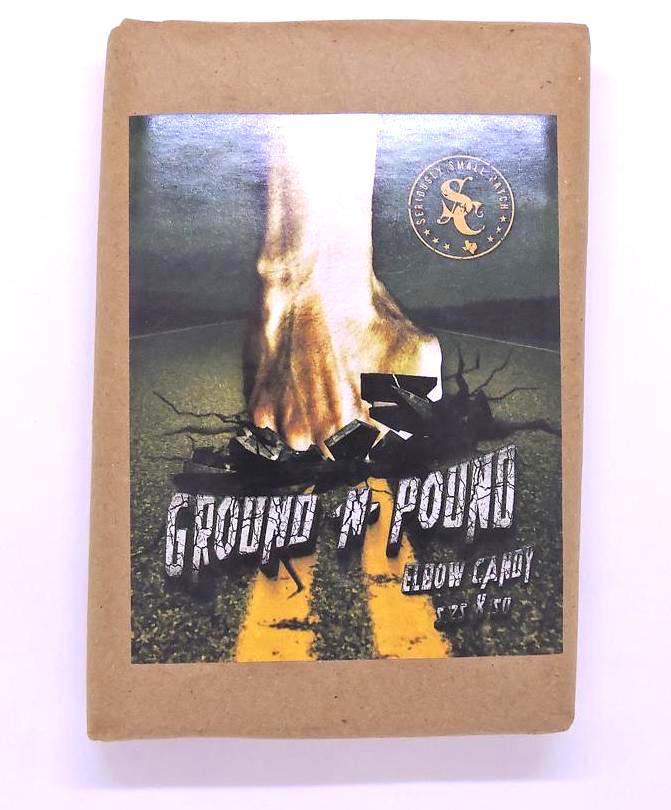 The Ground N Pound Elbow Candy’s Nicaraguan Corojo wrapper had a medium brown color with a light cinnamon tint to it. This was a wrapper that didn’t have much in the way of oil on the surface. There were some visible veins, but for the most part any visible wrapper seams were not noticeable. The cigar also featured a covered foot.

There is no cigar band on the Ground N Pound line.

A straight cut was used to remove the cap of the Ground N Pound Elbow Candy. Once the cap was removed, it was on to the pre-light draw stage. The dry draw delivered a mix of dusty earth, some subtle natural tobacco sweetness, and a slight pepper bite. I considered this to be a satisfactory pre-light draw. At this point it was time to light up the Ground N Pound Elbow Candy and see what the smoking phase would have in store.

Toward the end of first the first third of the Ground N Pound Elbow Candy, some cedar notes emerged in the forefront with the earth notes. The natural tobacco notes moved into more of a secondary role and occasionally would surface as a primary note. The black pepper notes were also a close secondary note. During the second third the fruit sweetness to the natural tobacco diminished and the creaminess slowly dissipated.

Moving into the second third, the cedar notes receded into the background, leaving the earth notes primary. Like the natural tobacco, from time to time there were several points where the cedar would re-emerge in the forefront. This pattern continued into the last third. There was an increase in the pepper component during the last third, but in the end the pepper still remained in the background. As the Ground N Pound Elbow Candy finished up, the resulting nub was slightly soft to the touch and cool in temperature.

The Ground N Pound Elbow Candy scored very nicely on its burn. The cigar maintained a straight burn path and had a relatively straight burn line. This was not a cigar that required an excessive amount of touch-ups. The resulting ash was skewed toward the firmer side. This was an ash that had a light-gray color to it. The burn rate and burn temperature were ideal. 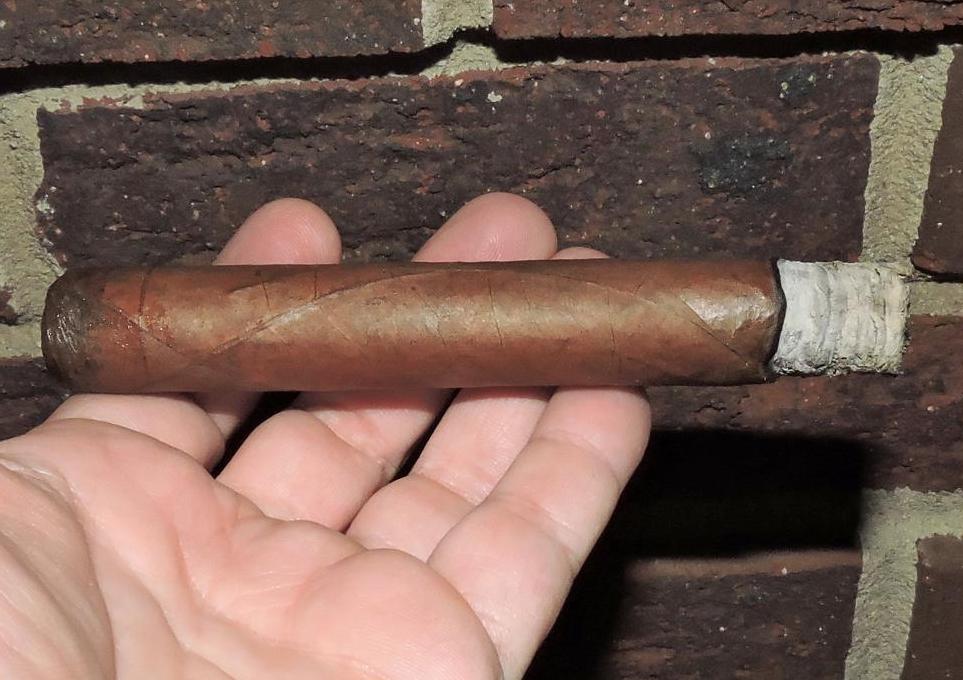 When it came to the draw, the Ground N Pound Elbow Candy also scored nicely. This was a cigar that had a touch of resistance to it – which is something I consider to be positive. It was also a cigar that generated an ample amount of smoke production. In terms of deriving flavor from the Ground N Pound Elbow Candy, I found it to be a low maintenance task.

In terms of strength, the Ground N Pound Elbow Candy falls into the medium range of the spectrum. There wasn’t much in the way of variance of the intensity of the strength level. When it came to body, the Ground N Pound Elbow Candy was medium to full. There was a slight decrease in intensity of the body during the first third and the cigar almost diminished to medium, but by the second third, the depth of the flavors grew again and the cigar slowly progressed through the medium to full area of the spectrum.

Looking at strength versus body, the body maintained the edge throughout the entire smoking experience.

The Ground N Pound Elbow Candy had its positive moments in the flavor profile, but overall there are better Aganorsa Leaf releases than this one. One notable impression is that the cigar left a lingering after taste on my tongue. Factoring in the discounted price, each Ground N Pound Elbow Candy would be at $5.50. For a $5.50 cigar, it would certainly be worth buying a single, but this cigar is only sold through the Serious Cigars website in five-packs at $27.50. Since our value ratings are based on buying patterns, this brings the value rating down to a “Try a Sample” because it requires a five-pack purchase. This is exactly what I recommend doing before getting a five-pack.