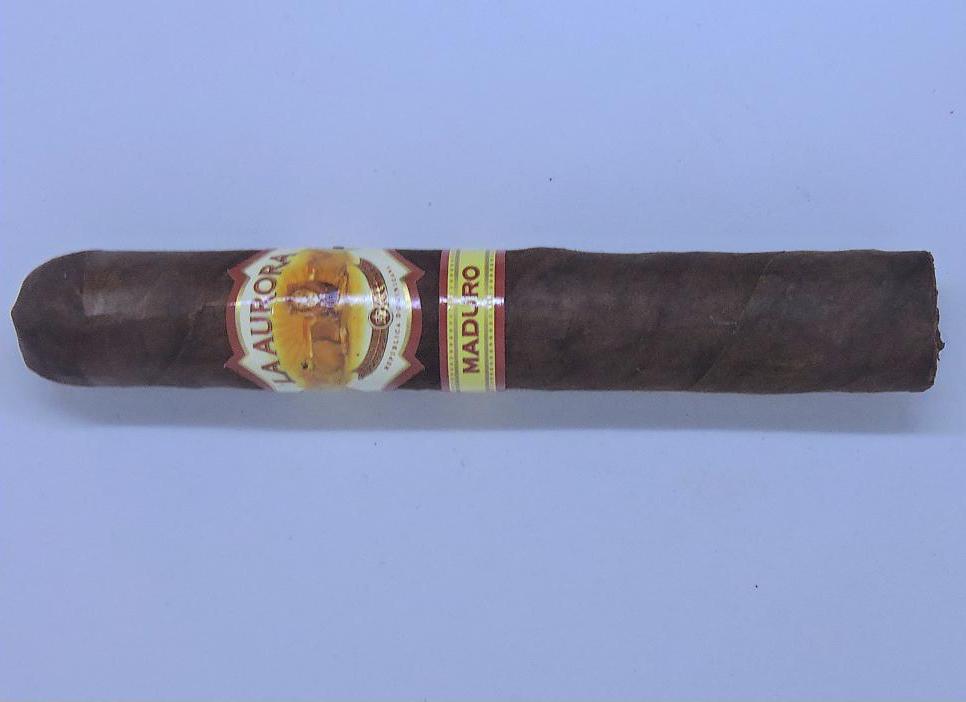 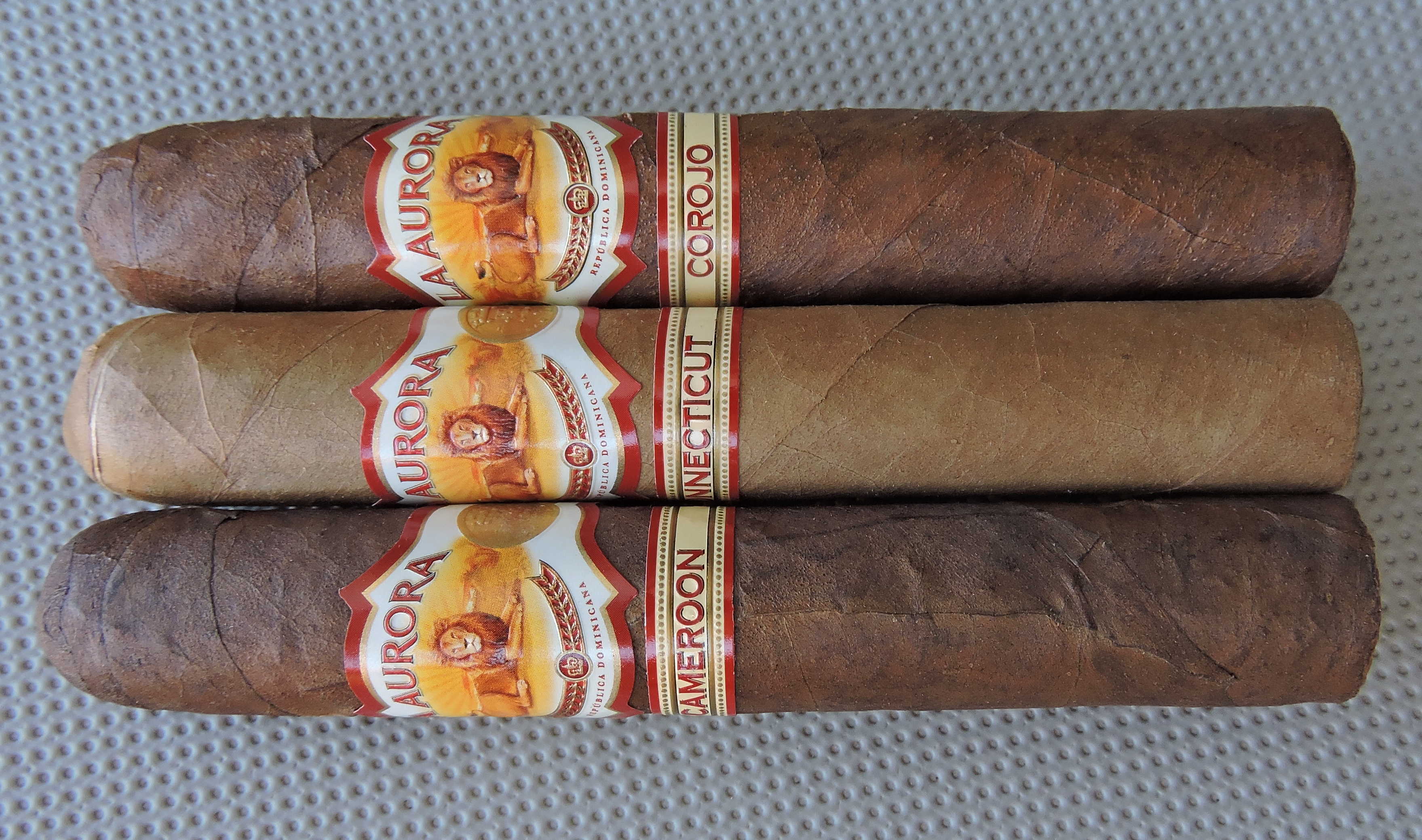 Without further ado, let’s break down the La Aurora 1985 Maduro Robusto and see what this cigar brings to the table.

In addition to the Brazilian Maduro wrapper, the La Aurora 1985 Maduro uses Nicaraguan tobaccos for the binder and filler.

The La Aurora 1985 Maduro comes in four sizes. Each is packaged in 20-count boxes. 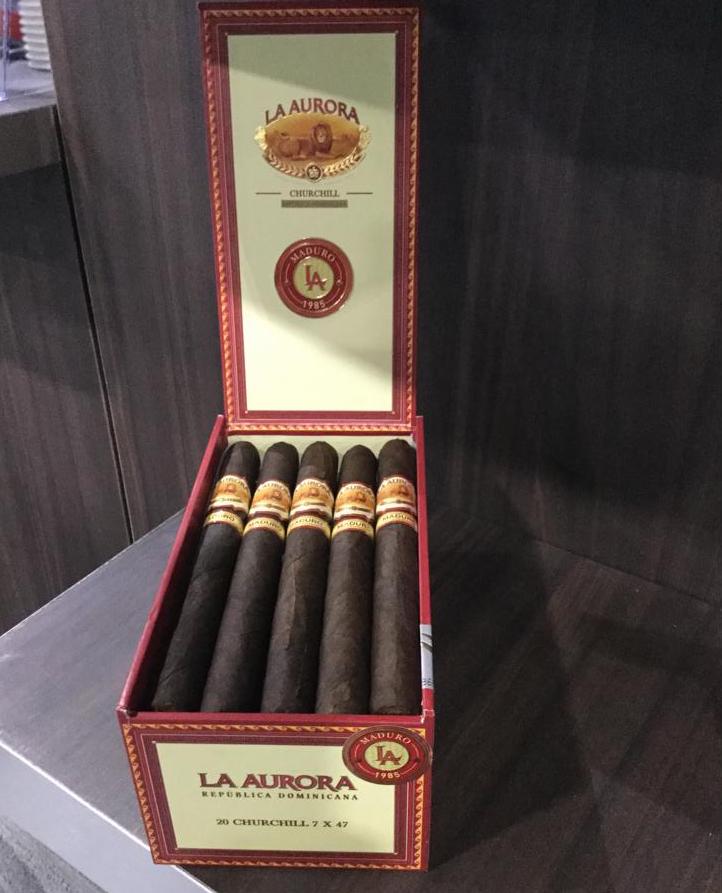 Packaging of the La Aurora 1985 Maduro

The Brazilian Maduro wrapper has a chocolate brown color to it. Upon close examination, there is some mottling visible on the surface. The wrapper itself has some oil on the surface. There were some visible veins and visible wrapper seams giving the wrapper a slightly rustic look to it.

There are two bands on the La Aurora 1985 Maduro. The primary band is common to all four installments of the Time Capsule Series. This is a white band with red and gold trim. On the center of the band is a yellow, orange, and red La Aurora lion logo. Above the logo is the text “LA AURORA” in red font arranged in a curved fashion. Below the logo are some red and gold adornments highlighted by a gold crown in the center. Below those adornments is the text “REPUBLICA DOMINICANA” in a smaller red font – also arranged in a curved fashion. The left and right side of the band each have two gold medallions. The far right of the band has the text “HECHO A MANO DESDE 1903” – arranged in landscape mode in red font.

The secondary band is unique to the 1985 Maduro. It has a pale yellow color with red and gold trim. On the center of the band is the text “MADURO” in red font.

The La Aurora 1985 Maduro Robusto started out with notes of chocolate, black coffee, earth, and black pepper. As the cigar moved through the first third, the chocolate and coffee notes moved into the forefront. Like on the pre-light draw, there was no fusion between the chocolate and coffee – both were separate and distinct notes. Meanwhile, the retro-hale produced an additional layer of mixed pepper.

Toward the latter part of the second third, the pepper notes increased in intensity and approached the forefront. As the 1985 Maduro Robusto entered the final third, the flavors seemed a bit muddled. The coffee notes still had the edge with the citrus and pepper notes close behind. There still were some notes of chocolate and earth present. This is the way the La Aurora Maduro Robusto came to a close. The resulting nub was soft to the touch and cool in temperature.

The burn line for the La Aurora 1985 Maduro had a slight bit of unevenness, but for the most part, this was a cigar that did not have a lot of difficulty maintaining a straight burn path. The resulting ash was mostly silvery gray with some dark spots mixed in. There was some minor flaking of the ash along the way. Meanwhile, the burn rate and burn temperature were both ideal. 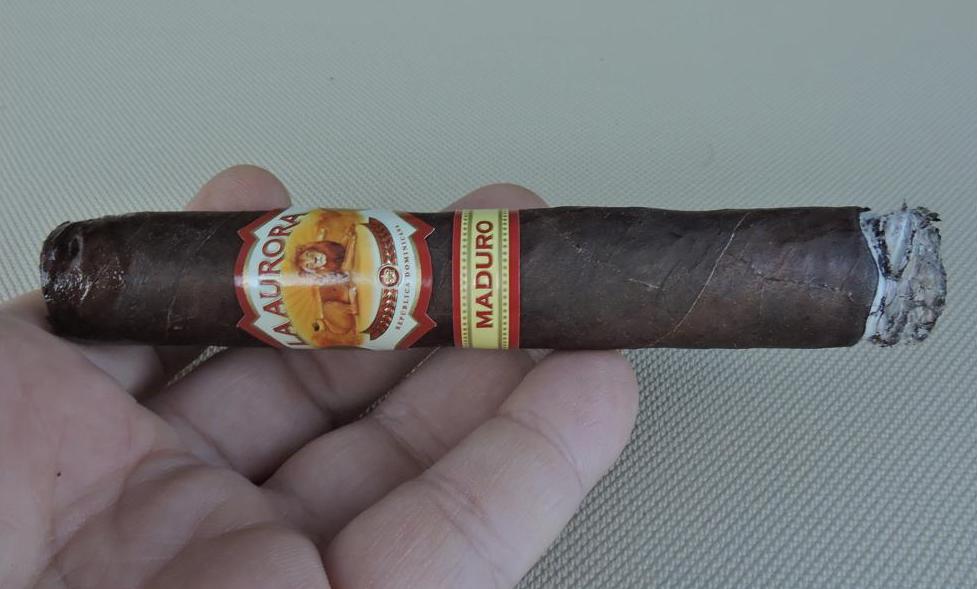 In terms of strength, the La Aurora 1985 Maduro Robusto is a cigar that was on the bolder side. This was a cigar that was medium to full in terms of both strength and body. There was a slight increase in the intensity levels of both attributes along the way, but in the end, the 1985 Maduro Robusto stayed in the medium to full range for strength and body for the duration of the cigar experience.

The La Aurora 1985 Maduro Robusto is one of those “tale of two cigars”-type of cigars. The first two-thirds saw this cigar firing on all cylinders. The last third was a different story as this is where the “muddling” of the flavors occurred and the cigar started delivering more in the way of spice and harshness. Still, for a cigar that was under $6.00 MSRP, this was a case where the pluses outweighed the minuses – and the first two thirds alone made the La Aurora 1985 Maduro Robusto worth the ride. Given this is a bolder cigar, it’s one that I would steer to a more seasoned cigar enthusiast. As for myself, this is a cigar I would buy and smoke again.