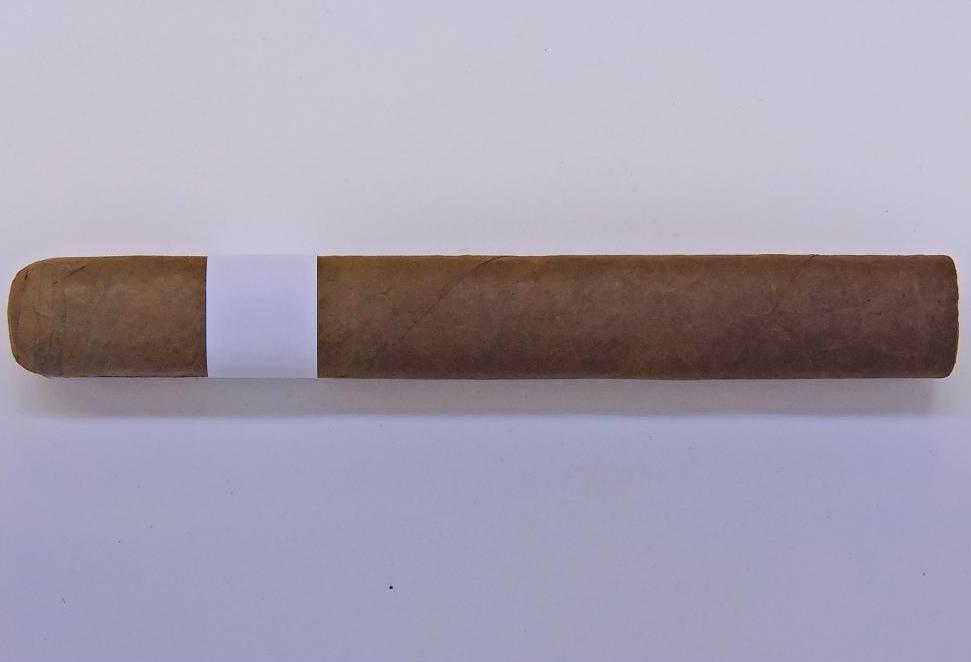 In January 2019, Cubariqueño Cigar Company released a limited small batch release known as the Protocol John Doe Series. It was a cigar where pretty much no information about the blend or origin was disclosed. The cigar was sold as a shop exclusive to Berkeley Humidor in New Jersey. Three hundred ten-count bundles were put up for sale, and with the cigars sight unseen the entire stock sold out in less than a day. Later in the year, Cubariqueño would release a second limited small batch release called the Protocol Jane Doe Series. While this one was disclosed as coming out of La Zona, no information about the blend was released. Protocol Jane Doe was originally offered to Berkeley Humidor with some remaining bundles made available at IPCPR, where it eventually sold out. Today we take a closer look at the Protocol Jane Doe Series.

It should be noted that what Cubariqueño has done with the John Doe and Jane Doe Series is not really a new concept. It’s a trend we have seen catch fire over the past couple of years in the cigar industry. Typically, this involves brands procuring unreleased or excess inventory blends from factories. Rather than invest heavily in marketing, the cigars are bundled, given a somewhat catchy name, and then marketed to consumers. It was a trend made popular by Robert Caldwell’s Lost & Found cigars. While it’s not a trend that I think is good for the cigar industry, one cannot argue the impact these cigars have made on the marketplace.

Today, we take a closer look at the Protocol Jane Doe Series and see what this cigar brings to the table.

As mentioned, the blend details have not been disclosed around the Protocol Jane Doe. The cigar did originate from Erik Espinosa’s La Zona factory in Estelí, Nicaragua.

Protocol Jane Doe was released in one size – a 6 x 52 Box Pressed. It was packaged in ten-count bundles. The number of bundles released has not been disclosed. 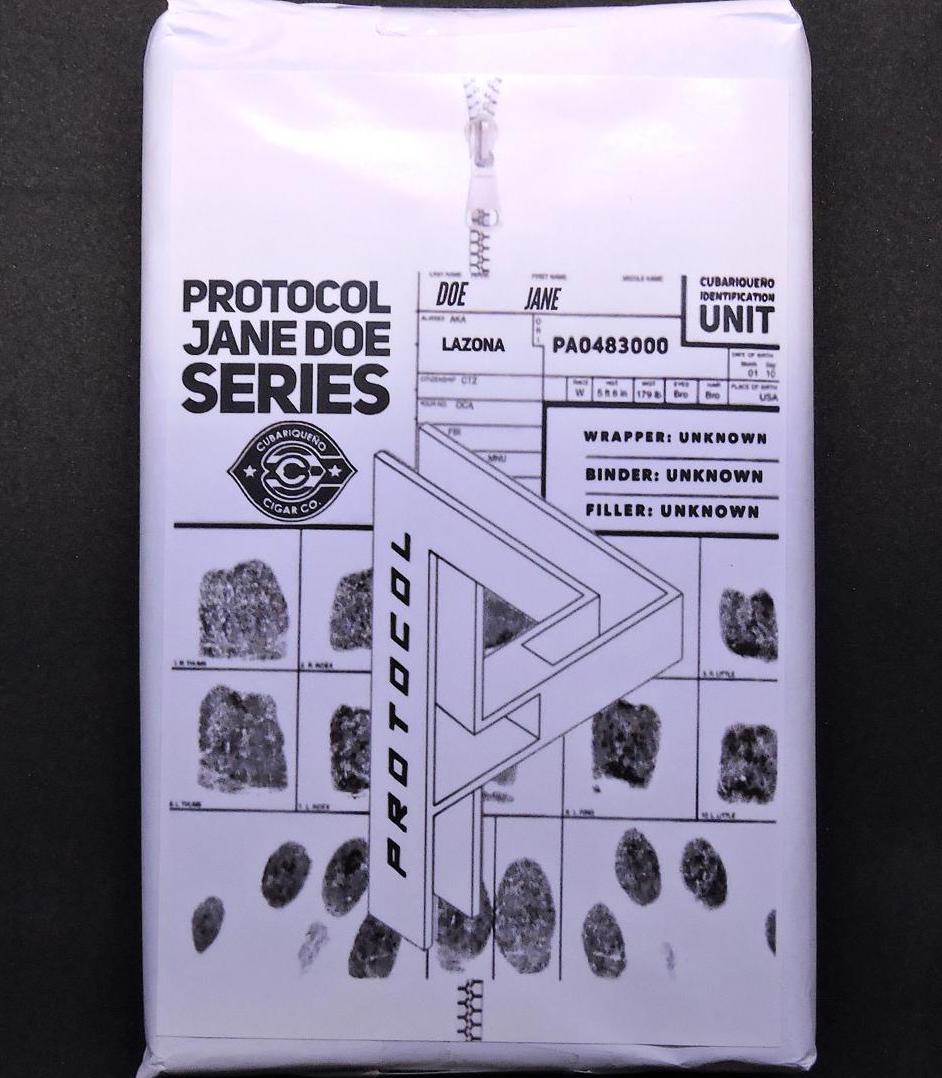 The wrapper of the Protocol Jane Doe had a medium brown color with a rosado tint to it. Upon close examination, there was some darker rotting on the surface of the wrapper. There also was a slight coating of oil on the wrapper. There were some visible veins and visible wrapper seams. Overall this was a wrapper that was on the smoother side. The box press had a near square press style.

The band on the Protocol Jane Doe is a blank white paper band. I’ll infer this represents the “unidentified” person of Jane Doe.

Prior to lighting up the Protocol Jane Doe, a straight cut was used to remove the cap. Once the cap was removed it was on to the pre-light draw phase. The dry draw delivered a mix of earth, cedar, and a slight citrus note.  This was a satisfactory pre-light draw in my book. At this point, it was time to light up the Protocol Jane Doe and move on to the smoking phase.

The Protocol Jane Doe opened with notes of classic wood, char, black pepper, earth, and citrus sweetness. As the cigar moved through the early stages, the citrus and earth notes moved into the forefront with the wood, char, and black pepper settling in the background. Concurrently, there still was somewhat of a prominent level of black pepper on the retro-hale.

In terms of construction the Protocol Jane Doe stacked up well and this was reflected on the performance of the burn. The Protocol Jane Doe maintained a relatively straight burn line and took a straight burn path. While this wasn’t overly firm ash, it was not loose, nor flaky. The ash had a salt and pepper color to it. The burn rate and burn temperature were both ideal. 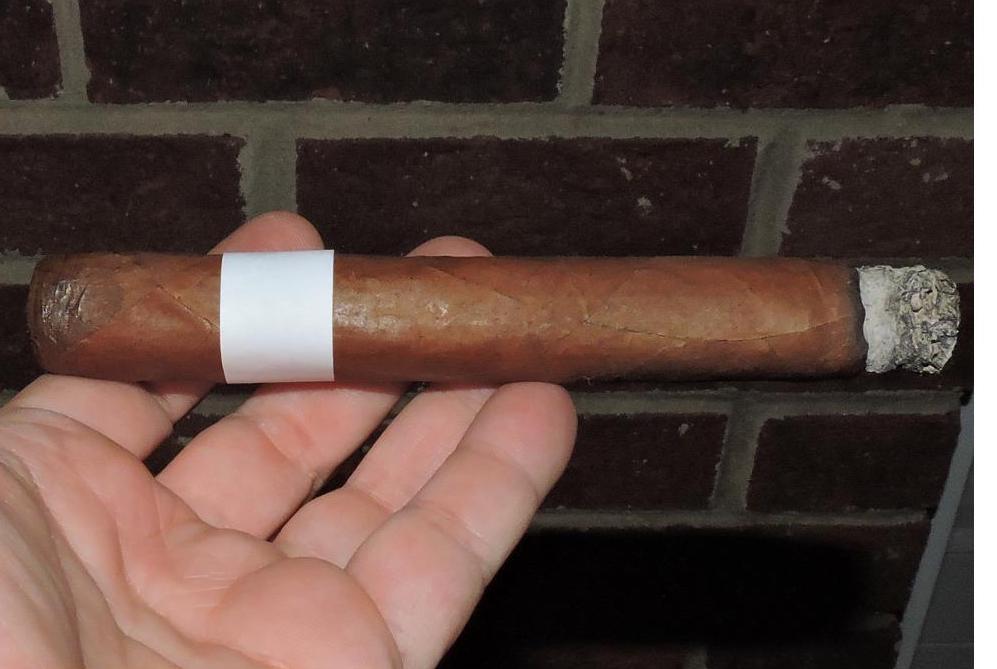 Burn of the Protocol Jane Doe

The excellent construction also reflected on the performance of the draw. Sometimes a box-press cigar has more of an open draw than I prefer, but no such case with the Protocol Jane Doe. This cigar had a touch of resistance on it – which I have said many times is ideal for me.

The Protocol Jane Doe is a bold cigar. It’s a cigar that started out medium to full in strength and by the second half, it progressed into full strength territory. Before the close of the second third, the strength level stopped increasing, but remained in the full area of the spectrum. As for the body, when factoring in the retro-hale, it’s at the full level. Throughout the smoking, I didn’t find much variance in the intensity levels of the body.

When it came to strength versus body, the body maintained the edge throughout the smoking experience.

In four years, Cubariqueño has built a very strong portfolio of six regular production blends. I was skeptical when Protocol John Doe came out, and while I didn’t think it was in the same category as its regular production lines, it surprised me as being a very good cigar. This gave me higher hopes for the Protocol Jane Doe Series. Yes, Protocol Jane Doe had excellent construction, but when it came to flavor, it fell short.

Cubariqueño’s Protocol Blue, Protocol Probable Cause, Protocol Themis, Protocol Official Misconduct, and two Protocol Sir Robert Peel lines are all excellent. When I look at the Protocol Jane Doe, not only is it not at the level of those core lines, but it fell short of the Protocol John Doe Series as well. In a nutshell, Cubariqueño has shown it can do much better than this. Protocol Jane Doe is a cigar with earth, wood, and char notes that lacked a wow factor – and frankly was not a well-balanced cigar. It’s a cigar that might have appeal to some – especially those wanting something bold. In the end, Protocol Jane Doe is one I would recommend trying a sample of before making the final purchase.