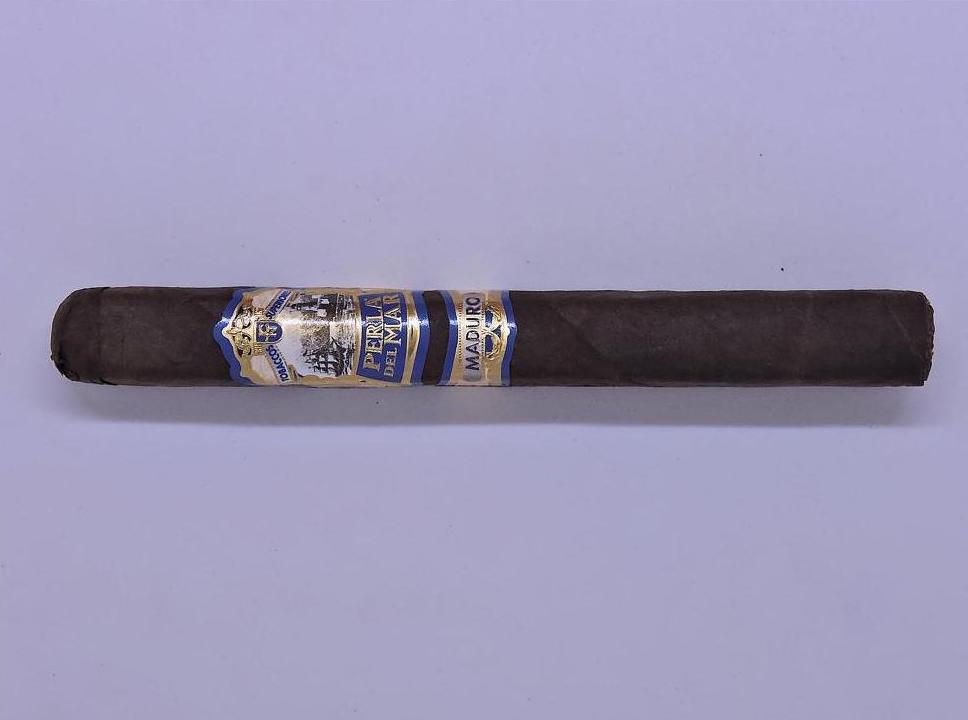 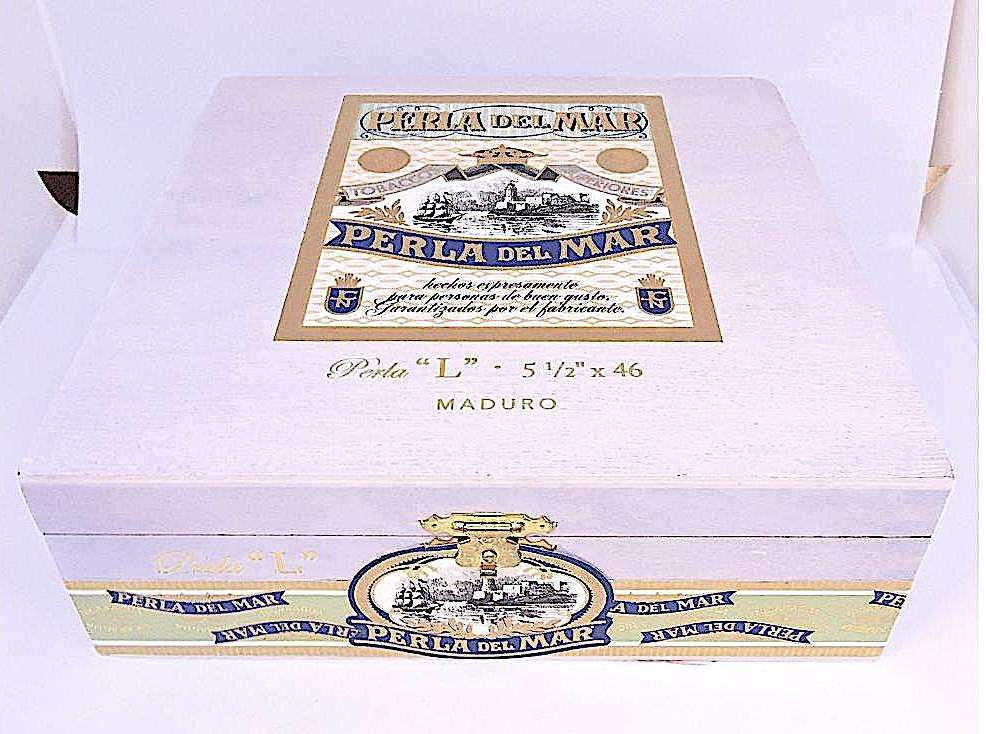 Without further ado, let’s break down the Perla Del Mar Maduro L and see what this cigar brings to the table. 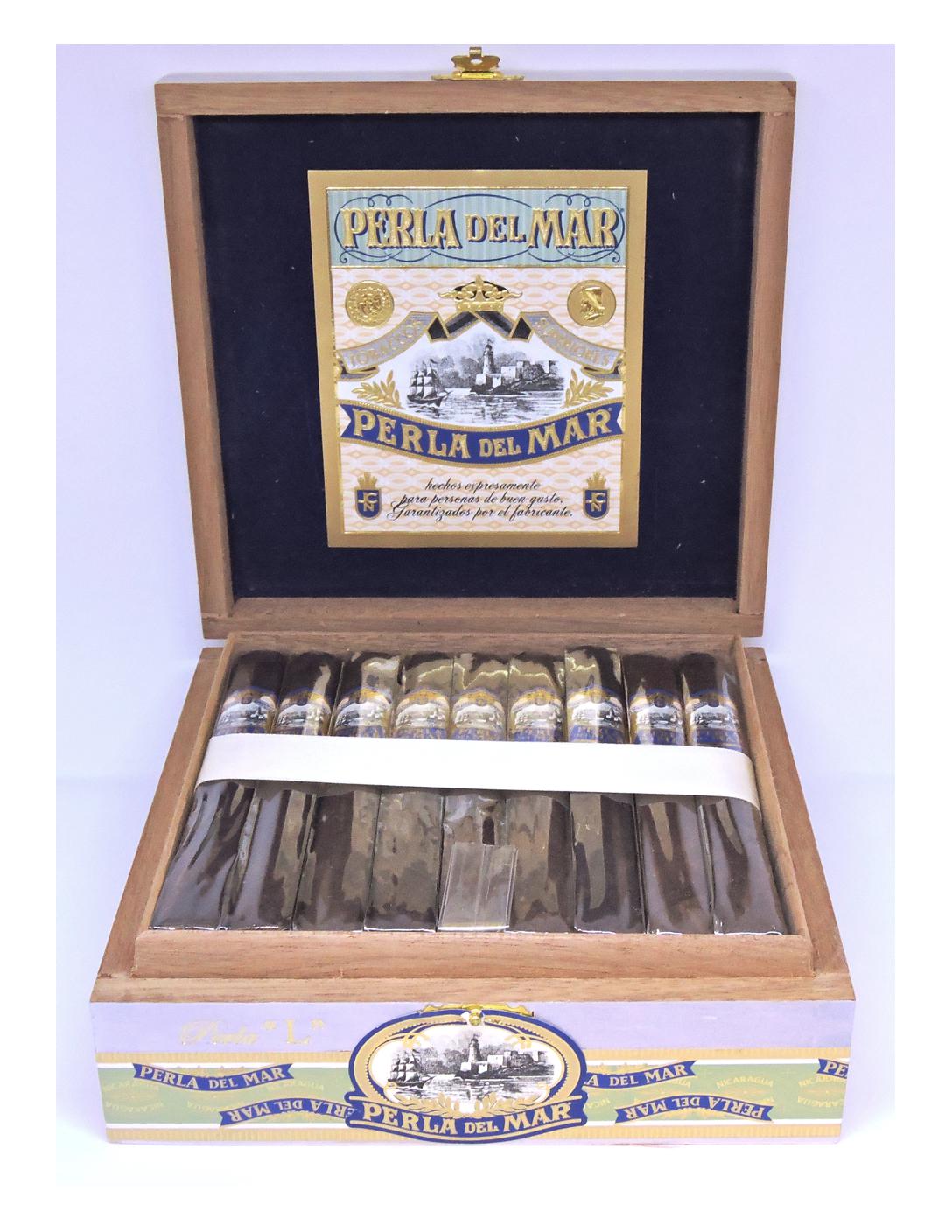 The Connecticut Broadleaf wrapper of the Perla Del Mar Maduro L had a dark chocolate color to it with a light sheen of oil on it. While there were some visible wrapper seams, the surface of the wrapper didn’t have much in the way of visible veins. The box-press had a square-press shape to it. 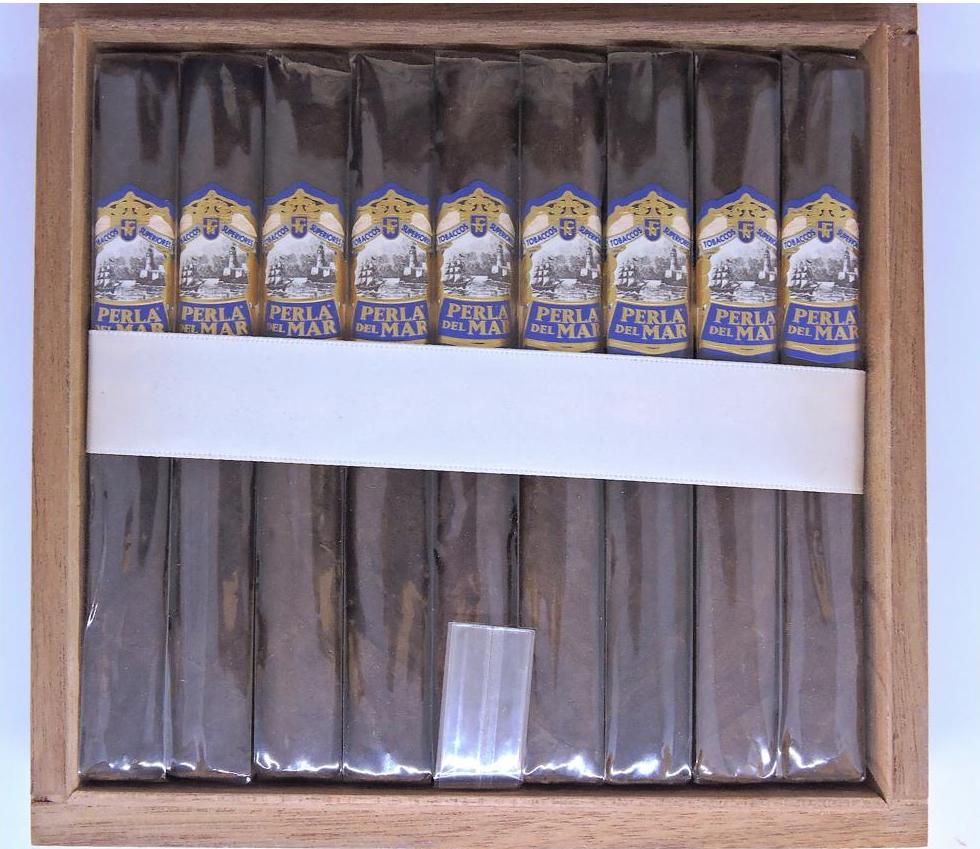 There are two bands on the Perla Del Mar Maduro. The primary band consists of a navy blue and gold color scheme. At the center of the band is a black and white sketch of clipper ships in Havana harbor (that we mentioned earlier on). Under the picture is the name “PERLA DEL MAR” in gold lettering on a navy blue background. The top of the band has a small blue and gold shield. Two light blue ribbons surround the shield. The left ribbon has the text “TOBACCOS” in gold lettering.  The right ribbon has the text “SUPERIORES” – also in gold lettering. The left and right side of the sketch have three gold medallions flanking each side of it.

The Perla Del Mar Maduro differs from the original Perla Del Mar in that is has a secondary band. This rests right below the primary band. The band is beige with gold and blue trim. On the center of the band is the text “MADURO” on a silver background in blue font There are a few blue adornments below the text.

A straight cut was placed into the Perla Del Mar Maduro L to remove the cap. From that point, it was time for the pre-light draw ritual. The dry draw delivered notes of mocha and earth. Mocha is a term that I use to refer to a fusion of coffee and sweet chocolate notes. This was a satisfactory pre-light draw. At this point, it was time to light up the Perla Del Mar Maduro L and see what the smoking phase would have in store.

The Perla Del Mar Maduro L started out with notes of white pepper and black coffee. The black coffee notes moved into the forefront early on. The pepper notes settled into the background. Some natural tobacco sweetness also surfaced in the background. It didn’t take long for the natural tobacco sweetness to morph into a chocolate note. As opposed to the mocha fusion I described early on, the coffee and chocolate notes were more separate and distinct. Meanwhile there was an additional layer of white pepper present.

During the early stages of the second third of the Perla Del Mar Maduro L, the chocolate notes moved into the forefront with the coffee. The coffee and chocolate remained separate and distinct. At the same there was a slight cherry note that also mixed into the forefront. It was during this phase the white pepper switched to more of a black pepper varietal. This held for the remainder of the second third.

The last third saw earth notes mix in with the black coffee notes. The chocolate and cherry sweetness diminished into the background. Meanwhile, the pepper notes increased but didn’t quite make it to the forefront. This is the way the Perla Del Mar Maduro L came to a close. The resulting nub was slightly soft to the touch and cool in temperature. 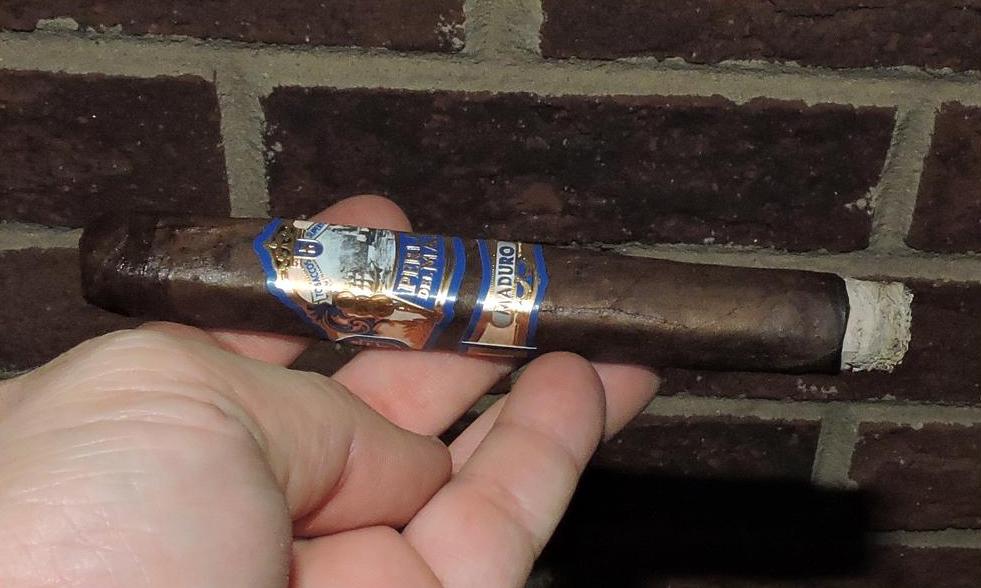 The draw to the Perla Del Mar Maduro L performed quite well. There was a nice balance of openness and resistance with this draw – which is something that I like. This is a cigar that also produced an ample amount of smoke.

The strength and body maintained a near equilibrium at the start of the smoking experience, but by the second half, the body took a slight edge over the strength.

While it’s not a petite lancero, if you are a fan of this particular vitola in a flavorful Maduro blend, the Perla De Maduro Maduro L is for you. The 46 ring gauge combined with the box-pressed format is almost going to make you feel like you are smoking a petite lancero. As mentioned, this is a flavorful blend. While at times there is a slight gritty feel to this cigar, overall I still found the flavors worked together in nice harmony. This is a cigar I could recommend to any cigar enthusiast. As for myself, this is a cigar I would smoke again. At just over $6.00 per cigar, it’s also a very good bargain – and it’s one which can definitely be given box worthy status.