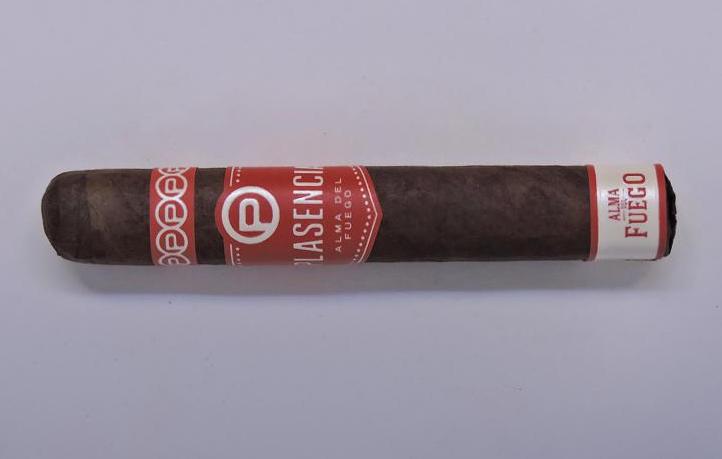 At the 2019 IPCPR Trade Show, Plasencia Cigars launched the third installment of its Alma series known as Alma del Fuego. It was at the 2017 IPCPR Trade Show when Plasencia Cigars officially launched their own brands.The Plasencias are world-renowned for over 150 years experience in the tobacco business. Up until 2017, most of that experience involved growing and curing tobacco as well as producing cigars for many others. With the launch of Plasencia Cigars, the Plasencias would bring their very own brand to market. Today, we take a closer look at the Plasencia Alma de Fuego in the Candente (Robusto size).

Alma is a series of five releases planned by Plasencia Cigars. Currently three of the five cigars have been put into regular production. These cigars include:

The name Alma means soul. “Alma del Fuego” translates to “Soul of Fire” and the vitola name Candente translates to “glowing” (a nod to how a fire burns). Originally Alma Fuerte was positioned as being the strongest cigar of the series, but with Alma del Fuego, Plasencia is giving the nod of its strongest offering to this cigar. The blend incorporates a significant amount of Ometepe tobacco in the filler. Ometepe is an island in Lake Nicaragua where the Plasencias grow tobacco. The island has volcanoes on it, and as a result, the soil is volcanic. Volcanoes are known for fire, thus the name “Alma de Fuego.”

Without further ado, let’s break down the Plasencia Alma del Fuego Candente and see what this cigar brings to the table.

The Alma del Fuego features 100% Nicaraguan tobaccos, including the Ometepe grown tobacco which makes up the majority of the filler. The cigar is finished with a dark sun-grown wrapper grown in the Jalapa region. Production is handled at the Plasencia’s factory in Estelí, Nicaragua. 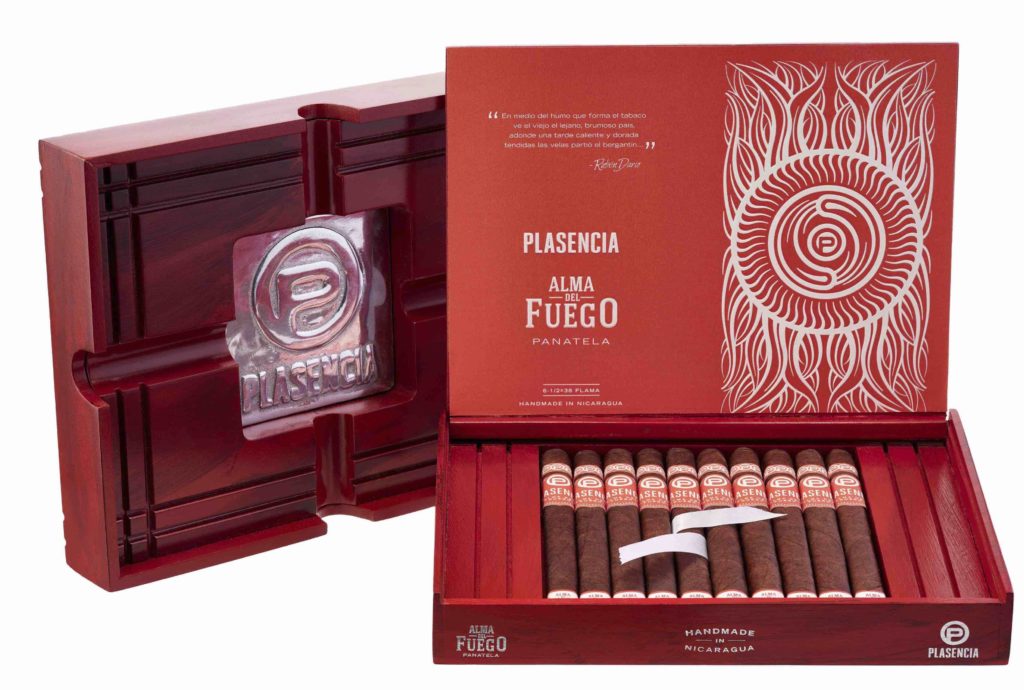 The Jalapa wrapper of the Plasencia Alma del Fuego Candente had a slightly dark chocolate bar look to it. The cigar had a soft box-press to it. There was subtle mottling on the wrapper and there wasn’t much oil on the wrapper either. The surface was smooth and was almost void of any visible veins and visible wrapper seams. The cigar is finished with a covered footer.

There are three bands on the Plasencia Alma del Campo. The primary band is red in color with white font. At the top is the Plasencia “P” logo. Just under it is the text “PLASENCIA,” and toward the lower part of the band is the text “ALMA DEL FUEGO.”

One of the secondary bands for the Plasencia Alma del Campo is actually above the Plasencia Cigars band. It is also red with the upper band in gray with the Plasencia “P” logo in white arranged in a repeating pattern. The other secondary band is on the footer.  This band is white with red pinstripe trim across the top and bottom. The text “ALMA DEL FUEGO ” is in red font and prominently featured.

After removing the footer band from the Plasencia Alma del Fuego Candente, a straight cut was used to remove the cap. From that point, it was on to the pre-light draw phase. The dry draw delivered a mix of coffee, mineral, and dried fruit sweetness. I consider this a satisfactory pre-light draw experience. At this point it was time to put fire (via lighter) to the Plasencia Alma de Fuego Candente, light up the cigar and see what the smoking phase would have in store.

The start of the Plasencia Alma de Fuego Candente picked up right where the pre-light draw left off. The notes of mineral and fruit sweetness were there, but a mocha note (a fusion of chocolate and coffee) replaced the coffee note. There was also some white pepper present. The mocha notes moved to the forefront early on with the other notes settling in the background. There was also a combination of mocha and white pepper on the retro-hale throughout the smoking experience.

Later in the first third, the mocha note returned to a mostly coffee note. The mineral and fruit notes were close secondary notes, and the pepper was further back. This continued into the second third. During this part of the smoke, there were times the chocolate component of the mocha resurfaced from time to time, but it was the coffee note that remained the primary one.

As the Plasencia Alma del Fuego Candente moved into the final third, there was an increase in both the pepper and mineral notes. The mineral notes joined the coffee notes in the forefront. The pepper and fruit notes were still in the background that helped round out the flavor profile. This is the way the Plasencia Alma del Fuego Candente came to a close. The resulting nub was slightly soft to the touch and cool in temperature.

The burn of the Plasencia Alma del Fuego Candente had a slight amount of jaggedness on the burn line and a slight amount of meandering on the burn path. This was remedied with some touch-ups and I didn’t find the number of touch-ups to be excessive. The resulting ash was light gray in color. This was not overly firm ash but was not loose nor flaky. Meanwhile, the burn temperature and rate were both ideal. 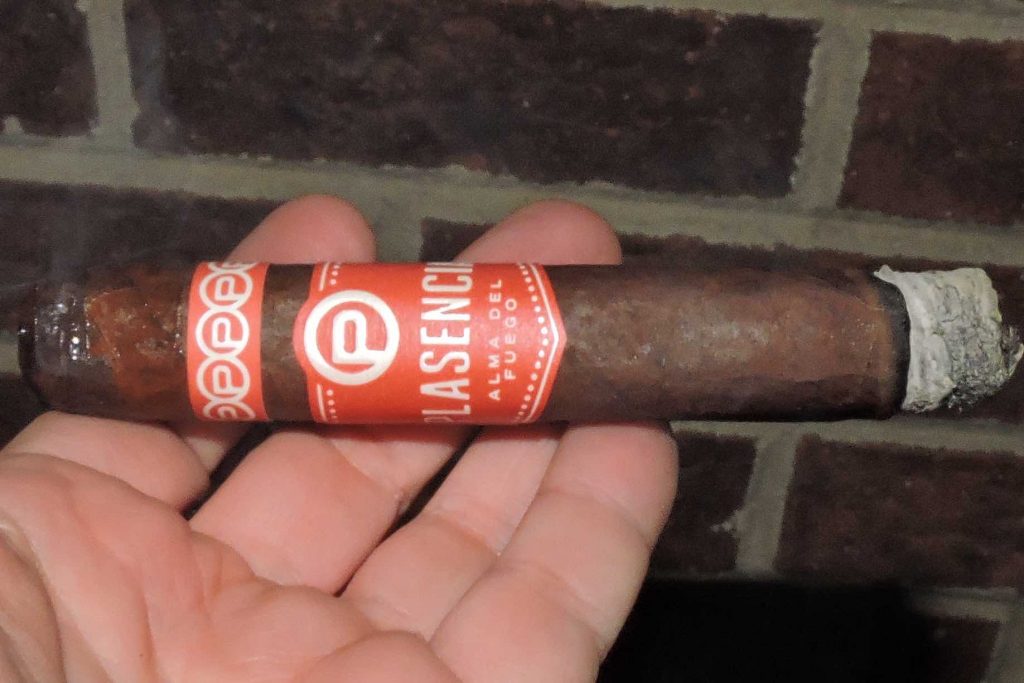 The draw to the Plasencia Alma del Fuego Candente had a nice balance of resistance and openness. Pressed cigars sometimes can draw a little more open than I prefer, but no such problem with this cigar. No problems deriving flavors from this cigar either.

In terms of strength and body, the claim can definitely be made the Plasencia Alma del Fuego Candente is the boldest of the Plasencia offerings. At the same time, this is not a cigar that is going to “punch you in the gut.” The strength maintained a medium to full level from start to finish. The body started out medium to full and by the 60% mark, it progressed into medium to full territory.

In terms of strength versus body, the body maintained an edge, particularly in the second half.

One thing that really surprised me was how the Ometepe tobacco played with the blend of the Plasencia Alma del Fuego Candente. It’s a tobacco that I can usually only enjoy in small amounts. When I heard that this blend was using a significant amount of Ometepe combined with a sun-grown wrapper, I wasn’t sure what to expect –  I thought this might be quite spicy. While there is a nice amount of spice on with the Plasencia Alma del Fuego Candente, I found this to be incredibly balanced – and more importantly incredibly flavorful.

The Plasencia Alma del Fuego Candente is a cigar I’d recommend to a more seasoned cigar enthusiast. At $15.00 per cigar, it’s not an inexpensive cigar, but it’s one that I would smoke again – and it’s one I give box worthy consideration to.