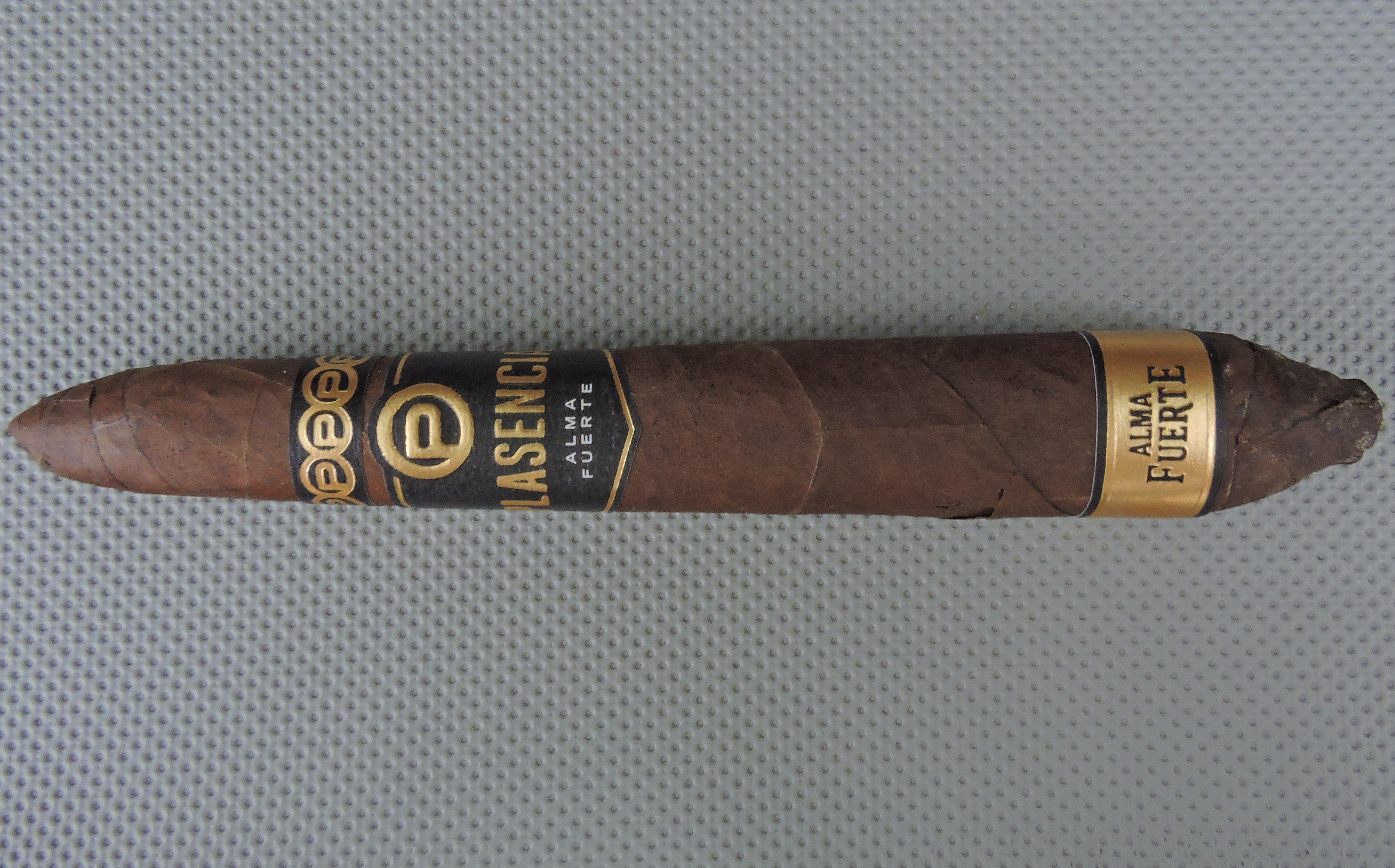 Late in 2016, the Plasencia family announced it was taking its very own cigar brand to market, Plasencia Cigars. While the family had branded some cigars before, the establishment of Plasencia Cigars was still a big step as now not only would they be producing their own brand, but they would now be distributing to market. Today we take a look at the first line released by Plasencia Cigars, the Plasencia Alma Fuerte Generación V. It’s a cigar that pays homage to the rich history of the family and showcases some of the innovation the brand is bringing to the table.

The Plasencias are well known in the tobacco business as growers and manufacturers spanning five generations of experience. The family traces its heritage in the tobacco business back to 1865 when Don Eduardo Plasencia left the Canary Islands and went to Cuba where he started growing tobacco. Following the Cuban Revolution, the family went to Central America where they started growing tobacco in Nicaragua. In 1978, the family faced another challenge when the Sandinistas burned down their farms during the Nicaraguan Revolution, and they started over again in Honduras. By 1986, Nestor Plasencia Sr. would enter the manufacturing side of the business. Keeping their farms in Honduras, the family returned to Nicaragua in 1990 and would once again grow tobacco there. Today with Nestor Andrés Plasencia at the company helm, the Plasencias produce 40 million cigar a year in four factories using tobacco from eight plantations.

Alma Fuerte was the first in a planned five-part series of “Alma” cigars. The name translates to “Strong Soul” – something that reflects the passion of the Plasencias in the cigar business. Alma Fuerte is an ultra-premium line featuring some of the best tobaccos the Plasencias have set aside over a decade ago. Since then, the company has added the second installment, Alma de Campo.

In addition, the Plasencias went all out on the packaging – creating a box that can be reused as a keepsake ashtray. Priced between $20.00 and $22.00 SRP, the Plasencias are quick to point out it is the aged tobacco that puts the Alma Fuerte line in the ultra-premium category. 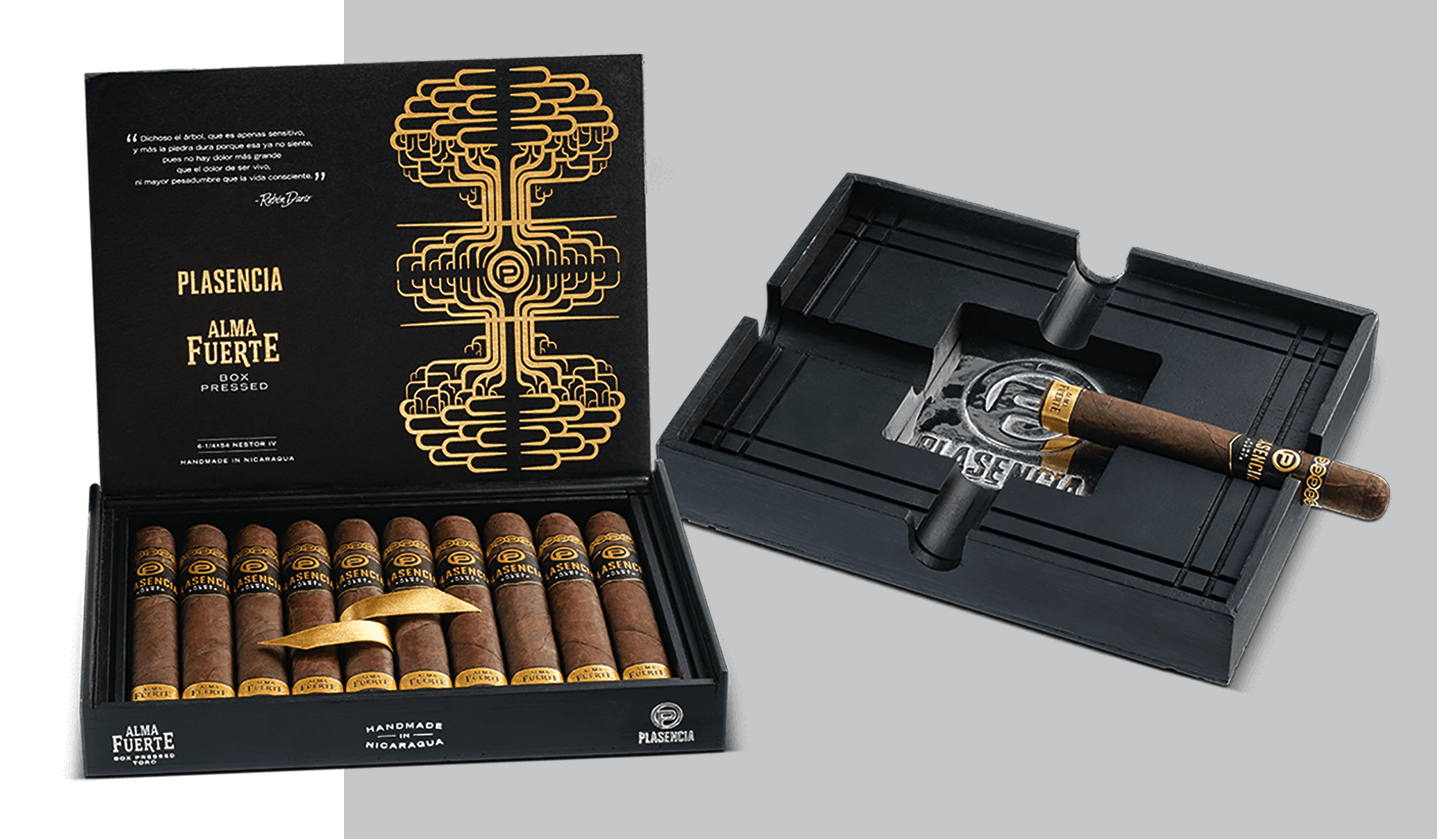 The Plasencia Alma Fuerte had a soft-launch on October 16, 2016 at the Carnegie Club in New York City, however it was at the 2017 IPCPR Trade Show where the Plasencias formally unveiled their brand and distribution operation. At the trade show, the company had a big media event as a part of its big kickoff.

Without further ado, let’s take a closer look at the Plasencia Alma Fuerte Generación V and see what this cigar brings to the table.

For the Alma Fuerte, the Plasencias opted to release a 100% Nicaraguan puro blend. It’s a line that is Criollo ’98-centric.  The tobaccos are from Plasencia farms in the four main growing regions of Nicaragua: Condega, Estelí, Jalapa, and Ometepe. The cigar is produced at the Plasencia S.A. factory in Estelí, Nicaragua.

The Alma Fuerte is available in three sizes. Each cigar is presented in ten-count boxes. The vitola names pay homage to three different generations of the Plasencias.

Each of the three sizes are box pressed. The Néstor IV is a traditional box-pressed Toro. The Sixto II is actually a six-sided box-press. Finally, as we will see, the Generación is a partially box-pressed Salomon.

The Nicaraguan wrapper of the Alma Fuerte Generación V has a chocolate brown color. This was definitely a wrapper that was thicker in texture. There was a light coating of oil on the wrapper. The surface of the wrapper had some thin veins and thin wrapper seams. The cigar was more rounded by the cap and on the nozzle tip. The remainder of the band had a firm box-press. The widest part of the cigar is just above the nozzle tip. There is a gentle taper in the ring gauge up toward the cap. The cap has a sharper taper and has a near-torpedo tip.

There are three bands on the Plasencia Alma Fuerte. The primary band is black with gold font. There is a “P” logo with the text “PLASENCIA” below it in gold font. Just below that text is the text “ALMA FUERTE” is in thin white font. The band is finished with gold trim.

One of the secondary bands for the Plasencia Alma Fuerte is above the Plasencia Cigars band. The upper band is black with a gold Plasencia “P” logo arranged in a repeating pattern. The other secondary band sits just above the tapered footer. This band is gold with black pinstripe trim across the top and bottom. On the gold background is the text “ALMA FUERTE” in thin black font.

As I do with all figurado cigars, I used a straight cut to remove the tip of the Plasencia Alma Fuerte Generación V . I used my Credo Special T cutter with the 36 ring gauge hole to get an ideal cut of the figurado. This allowed me to get a smaller ring gauge cut and to take advantage of the tapering of this cigar. Once I clipped off the tip, I moved on to the pre-light draw. The dry draw delivered a mix of chocolate, earth, and cedar notes. I consider this to be an excellent pre-light draw. At this point, I was ready to light up the Alma Fuerte Generación V and see what the smoking phase would have in store.

The Plasencia Alma Fuerte Generación V kicked off with notes of chocolate, earth, cedar, and natural tobacco. During the early stages the chocolate notes became primary. About midway through the first third, there was a nutty component I also picked up in the forefront. The cedar notes floated between the forefront and background and the earth and natural tobacco were grounded as secondary notes. Meanwhile the retro-hale produced an additional layer of cedar, classic wood, and some black pepper.

The last third definitely saw more in the way of spice coming from the cedar. The natural tobacco was now also in the forefront. I still detected notes of chocolate and earth, but the nuttiness had pretty much dissipated. This is the way the cigar experience of the Plasencia Alma Fuerte Generación V  came to a close. The resulting nub was cool in temperature and slight soft to the touch.

All in all, this was a burn that had some quirks, but the quirks never became burdensome. There were times that the Alma Fuerte Generación V wanted to take a slightly uneven burn path. This was remedied with some touch-ups, but I found the touch-ups to be more frequent than I’d prefer. The actual burn line itself also had a little bit of jaggedness. The resulting ash had a salt and pepper color. This wasn’t an overly firm ash, but it wasn’t loose or flaky either. Meanwhile, the burn rate and burn temperature were ideal. 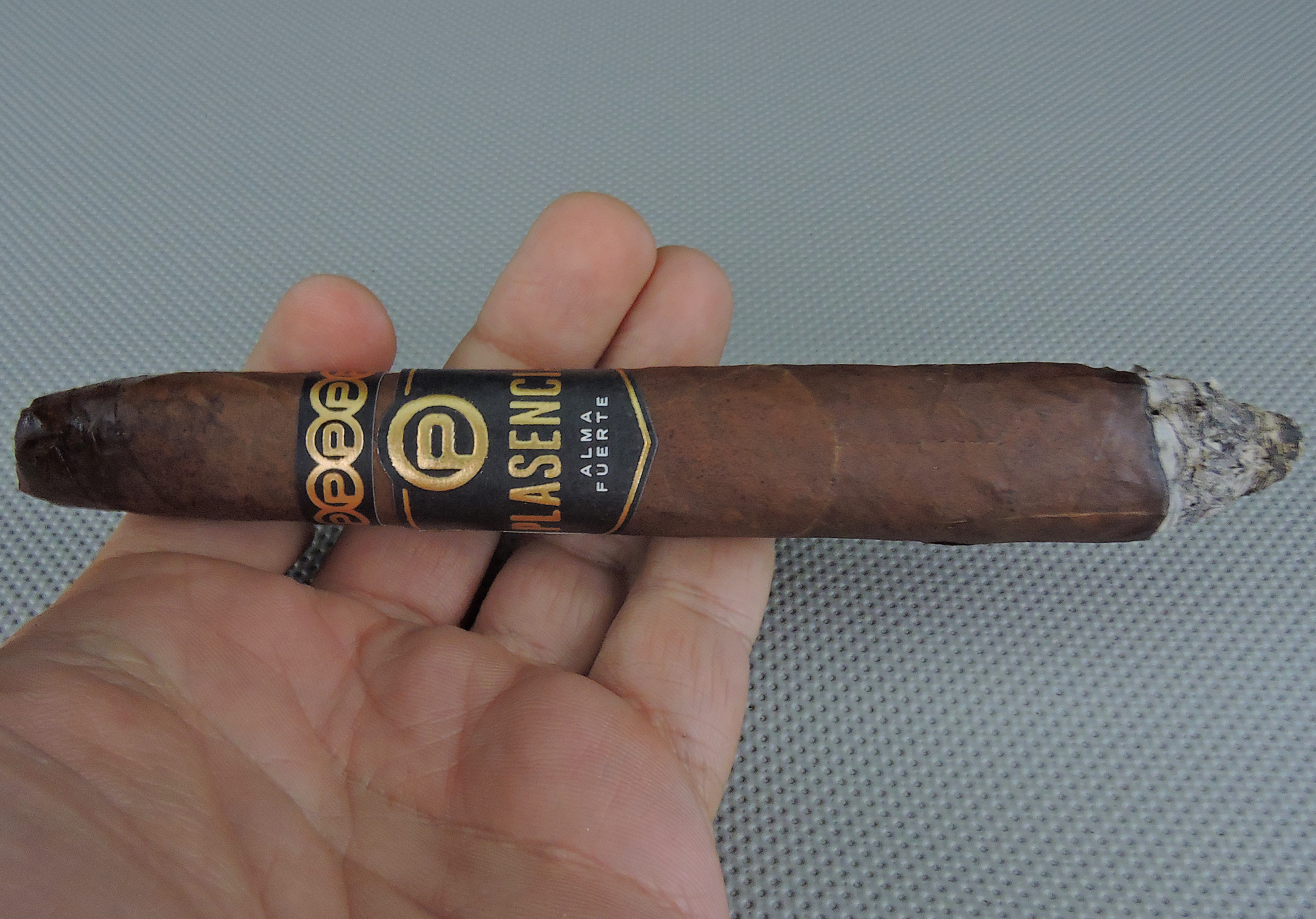 Draw-wise, the Alma Fuerte Generación V performed quite well. It has a touch of resistance – which is something that I like. The area of the torpedo tip held up well throughout the smoking experience while puffing on it.

In terms of strength versus body, I found the body had an edge in the first half. When the cigar picked up in intensity in the second half, the gap between the two lessened.

Overall, I found the Plasencia Alma Fuerte Generación V to be an excellent cigar. The flavors produced from this cigar were extremely enjoyable and there was enough complexity to command my attention during the smoking experience. As I mentioned, there were some quirks along the way with the burn – and I would have preferred not to have them, but overall the pluses clearly outweighed the minuses. Finally, while this cigar did spike up in strength and body in the second half, I never found it to be overwhelming nor detract from the overall experience.

This is a cigar I would recommend to an experienced cigar enthusiast, but it’s one that is nice for a novice looking to graduate to something fuller. As for myself, it’s a cigar I would smoke again. This blend and vitola had a lot going on and despite an ultra-premium price point, it’s still one I would put forward for box worthy consideration.