Agile Cigar Reviews are cigar assessments where we use a lightweight, shorter format. These will never take the place of our comprehensive reviews. They are only used on blends we have previously assessed. This might be a blend we are re-scoring or giving a score for the first time. It might be a blend we are looking at in a different size. Today we look at the Quesada Reserva Privada Barber-Pole Robusto. This is a cigar line we previously assessed back in September 2017. 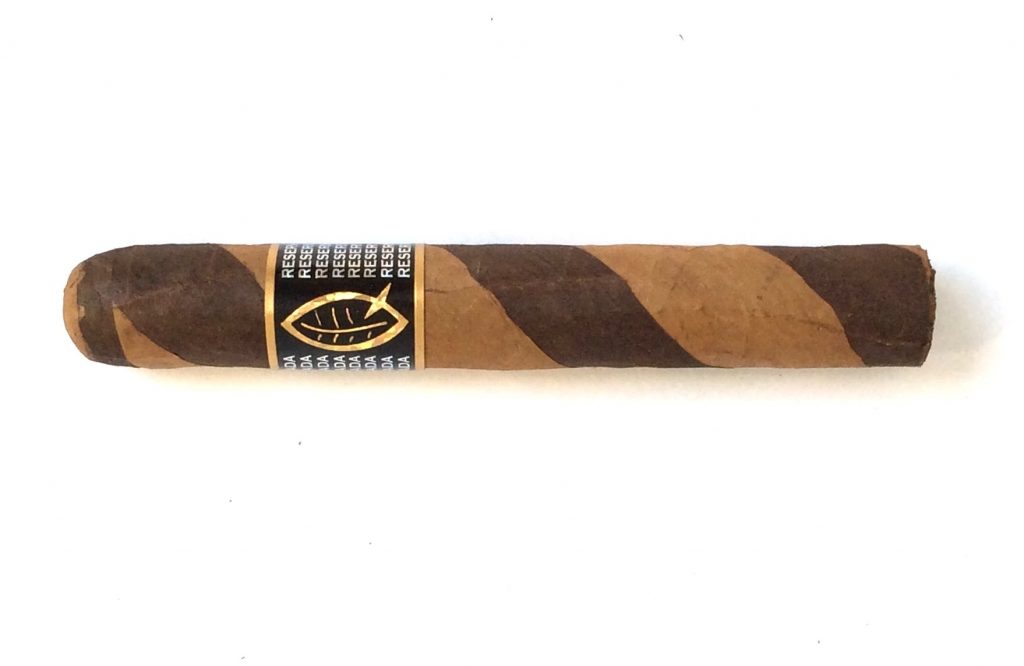 It was in 1997, current company owner Manuel Quesada convinced his father Manuel Sr. and brother Alvaro to set aside a crop of 1997 San Vincente tobacco that was considerered to be exceptional for a special project. The crop was described as “Cosheca Pareja” meaning that the plants were all uniform in height. The middle of the plants were also the same size indicating the nutrients had spread evenly in the plant. The tobaccos were harvested and stored in bales made from palm tree bark wrapped in palm leaves. The bark protected the tobaccos from outside conditions and allowed for a natural fermentation as they aged. A few years ago, Manuel offered the tobacco to his daughters Patricia and Raquela for a special project – and then the wheels were put in motion.

In addition to the Barber-Pole wrappers, the cigar is highlighted by what is now 20-plus-year-old aged Dominican San Vincente tobacco used in the binder and filler. The filler also incorporates some Pennsylvania Ligero. The Robusto size measures 4 3/4 x 52. Production was described as limited and the initial allocation was 300 ten-count boxes.

The Quesada Reserva Privada Barber-Pole Robusto started with notes of cream, cherry, cedar, and coffee notes. Early on the cream notes moved to the forefront. Throughout the smoking experience, the cherry provided a complementary role to the other flavors. As the cigar experience moved into the second third, the coffee notes became richer – joining the cream up front and then displacing the cream as the primary flavor. The final third saw an increase in the cedar – particularly the spice component.

When it came to strength and body, the Quesada Reserva Privada Barber-Pole Robusto was medium from start to finish. There was a slight increase in the intensity of both attributes throughout the smoking experience, but in the end, the cigar remained in the medium range. Throughout the smoking experience, the body had a slight edge over the strength.

When the Quesada Reserva Privada Barber-Pole first came out, I noted how barber-pole cigars tend to be either gimmicky or very good. In the case of the Reserva Privada Barber Pole Robusto, it fell into the latter category. Now almost three years later, I stand by that assessment. It’s not going to deliver flavors radically different from what one would expect from a Connecticut Shade/Oscuro barber-pole, but the flavors it delivers are excellent. For whatever reason, this time (despite the age), I found this cigar hit me a little bolder – I’m unsure what to make of that.

The Quesada Reserva Privada Barber-Pole Robusto is something that can be enjoyed by any cigar enthusiast any time of the day. As for myself, this is a cigar I would smoke again – and it’s one that is worthy of buying multiples.