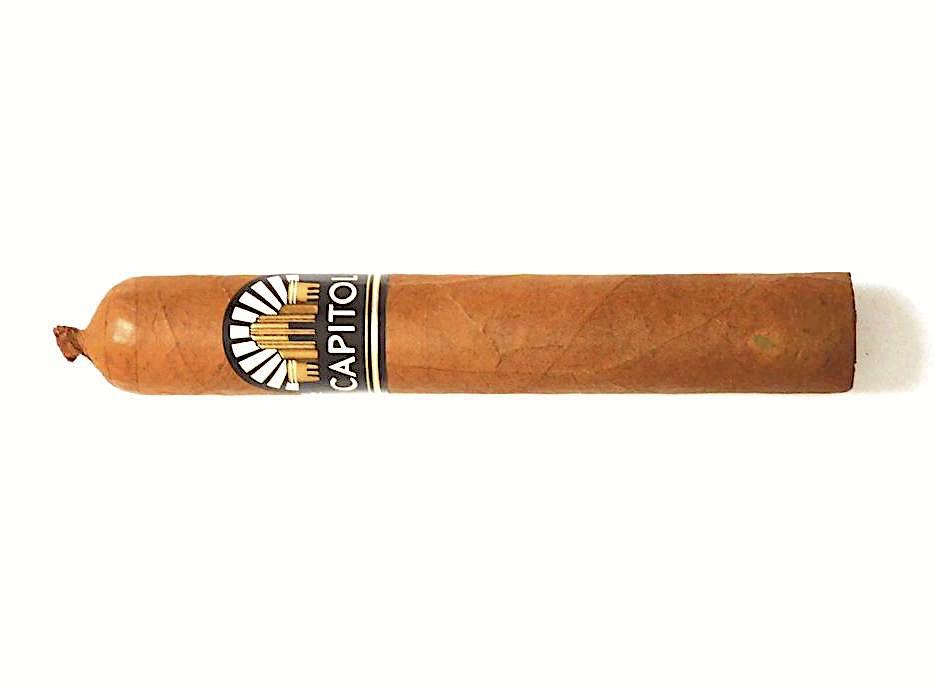 Back in 2017, Rafael Nodal joined the Tabacalera USA team as a part of strategic alliance with his company Boutique Blends. In his role at Tabacalera USA, Nodal would take on the role of Director of Product Capability and would oversee the development of many brands seen in the Tabacalera USA portfolio. Nodal would also work on continuing to foster partnerships that Tabacalera USA had with the Plasencia and AJ Fernandez factories in Nicaragua. While Tabacalera USA includes many brands such as Montecristo, Romeo y Julia, H. Upmann, and Trinidad, there is a business unit based in Spain called Tabacalera SLU focusing on the European market. Tabacalera SLU is best known for the VegaFina brand. Earlier this year, a new brand was introduced to the Spanish market known as Capitol. For this brand, Tabacalera SLU turned to Nodal to develop it. In turn Nodal would turn to the Plasencia factory to produce the Capitol line. Today, we take a closer look at the Capitol line in the “Casino” (a Robusto Extra) size.

For the Capitol line, the cigar features a theme of the 1920s. The 1920s were known as “The Roaring Twenties”. It was an era of economic prosperity. In the U.S. and Europe, it saw more people live in cities than at any other point in history. Capitol incorporates the theme of the Roaring Twenties in both its packaging and banding. 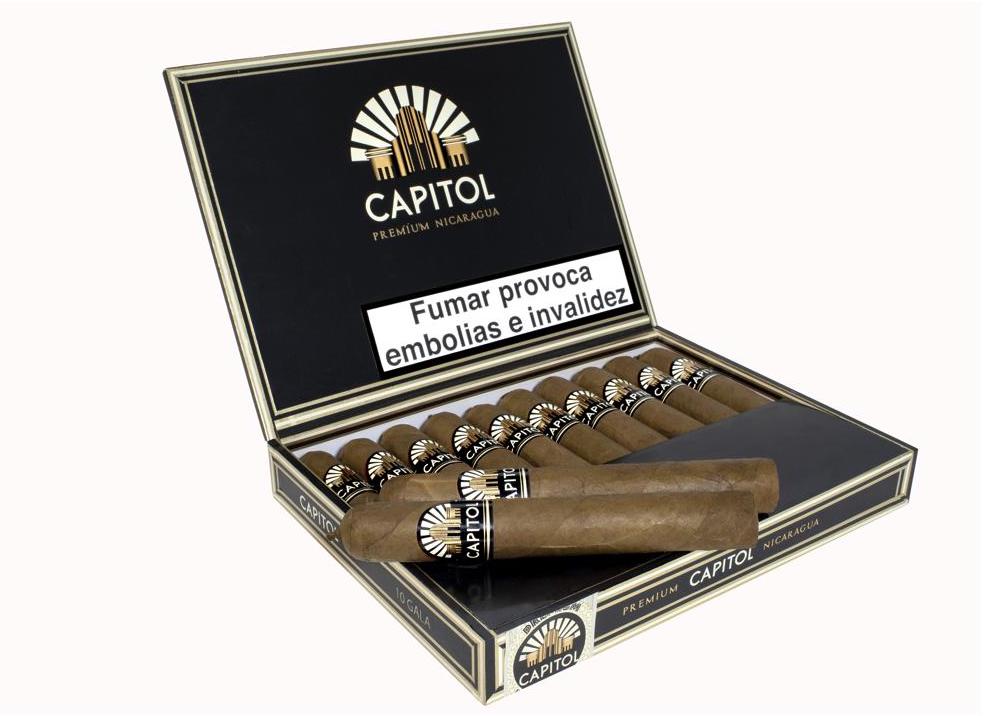 Without further ado, let’s break down the Capitol Casino and see what this cigar brings to the table.

The Capitol cigar line is an all-Nicaraguan cigar. As mentioned, production is handled at the Plasencia factory in Estelí, Nicaragua.

The Capitol is offered in three sizes. Each is presented in ten-count boxes.

The Nicaraguan wrapper of the Capitol Casino had a medium brown color with a slight rosado tint. There wasn’t much oil on the surface of the wrapper. There were some thin wrapper seams that were visible. While there also were some visible veins, this was a relatively smooth surface on the wrapper. The cigar is finished with a thick pig-tail on the cap.

The band of the Capitol has a black, gold, and white pattern. The center of the band has a gold 1920’s art-deco style image of a building at the center with a white and black sunburst above it. The lower part of the band has the text “CAPITOL” in white font. To the left and right of the band is the text “PREMIUM” and “NICARAGUA” respectively in gold font.

As opposed to pulling the pig-tail cap off the Capitol Casino, a straight cut was used to remove both the cap and pig-tail simultaneously. Once the cap was removed, it was on to the pre-light draw. The cold draw delivered a mix of cream, wood, and cedar. It was a straight-forward and satisfactory pre-light draw. At this point it was time to toast up the Capitol Casino and see what the smoking experience would deliver.

The Capitol Casino kicked off with notes of earth, bakers spice, and a sweetness that I can best describe as a berry-like sweetness. Early on the berry like sweetness became the primary note. As the Capitol Casino moved through the first third some natural tobacco and cedar notes entered the equation. Meanwhile on the retro-hale there was also an additional layer of berry and earth present.

The last third of the Capitol Casino saw the natural tobacco notes hold as the primary flavor. The pepper notes took a slight edge over the other secondary notes which included berry, cedar, and baker’s spice. This is the way the Capitol Casino came to a close. The resulting nub was slightly soft to the touch and slightly warm in temperature.

There was some jaggedness on the burn line of the Capitol Casino. In addition, there were a couple of points where the burn path wanted to meander. Both of these items were remedied with touch-ups and an excessive amount of touch-ups was not required. The resulting ash was silver gray in color. This was also a firm ash that came off the Capitol Casino in clean chunks. The burn rate was ideal. The burn temperature was also ideal until the closing puffs of the cigar where it got slightly warm – and that was an indicator it was time to put down the Capitol Casino. 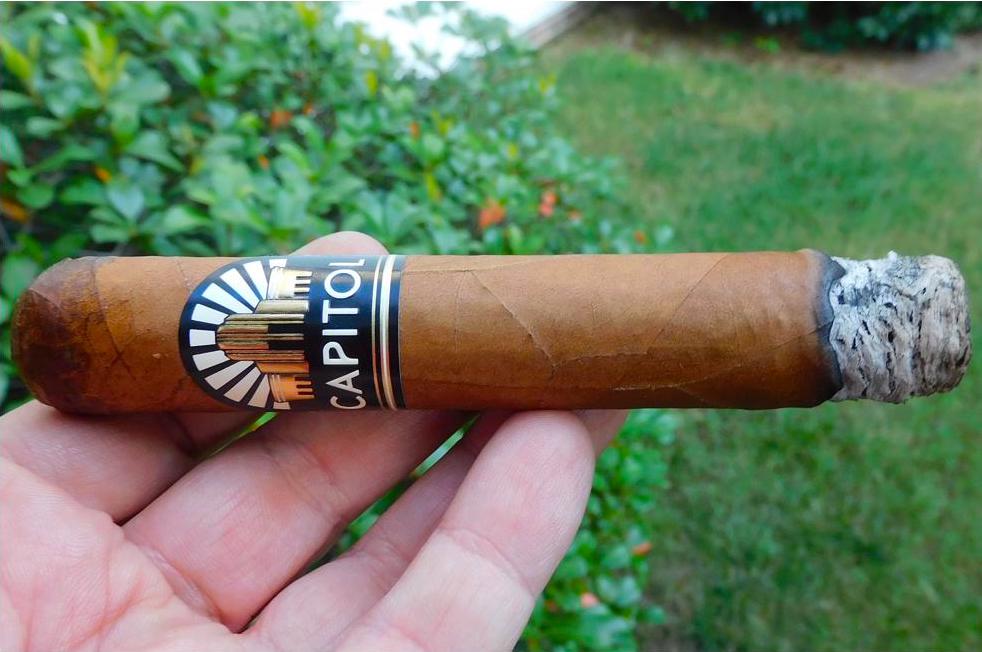 Burn of the Capitol Casino

The draw of the Capitol Casino was on the open side. This wasn’t a loose draw, but at the same time I normally prefer a little more resistance on the draw. In the end, this was still a low maintenance cigar to derive flavor.

When looking at strength versus body, the body maintained the edge throughout the smoking experience. The body had a slight edge in the second half.

This was an impressive debut for the Capitol line by Tabacalera USA. The berry-like sweetness was something I really enjoyed on this cigar – and it helped contribute to a unique flavor profile. While berry might sound like a dessert, this is a blend that really maintained a “tobacco feel” to it. I also found the fact this cigar was dialed back in both strength and body really allowed the flavors and the flavor nuances to shine. This is a cigar I would recommend to both the experienced and novice cigar enthusiast. It’s a little bit of a pricier cigar (10 Euros), but its still a cigar that I would smoke and buy again. It’s also a cigar that I hope eventually makes its way to the U.S. shores.