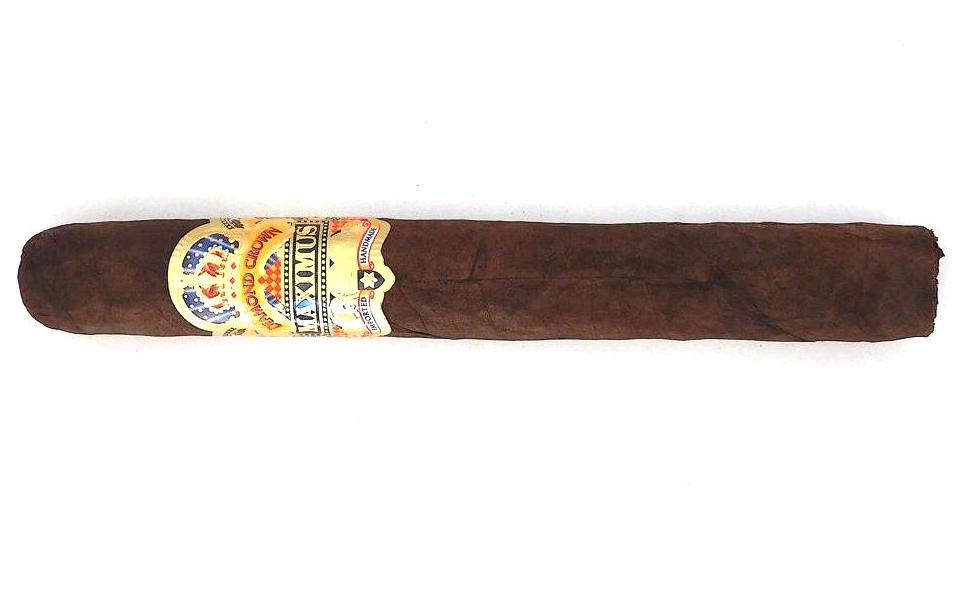 Without further ado, let’s take a closer look at the Diamond Brown Maduro No. 4 and see what his cigar brings to the table.

The blend of the Diamond Crown Maximus consists of Dominican tobaccos covered with the Ecuadorian El Bajo Sun Grown wrapper farmed by the Oliva family. El Bajo refers to the region where the wrapper is grown. The blend also features high priming “corona” from the tobacco plant.

The Diamond Crown Maximus is offered in seven ongoing production sizes. Each is presented in 20-count boxes.

The El Bajo wrapper of the Diamond Crown Maximus Toro No. 4 has a dark, almost milk-chocolate color to it. Upon closer examination, some darker mottling can be seen on the surface. The surface of the wrapper has almost a velvety-like complexion. There are some veins and some visible wrapper seams.

The band of the Diamond Crown Maximus has a complex design scheme to it. At the top, the band is gold and features a red crown surrounded by blue accents and gold stars. Below the crown is an orange ribbon design with the text “DIAMOND CROWN” in red. Below the ribbon is the text “MAXIMUS” in gold font on a black rectanglar background. Below the “MAXIMUS” text are a series of gold medallions. The lower part of the band has a white ribbon design with the text “IMPORTED HANDMADE” in blue font. In between that text is a small blue shield with a gold star. The design elements sitting on the lower center of the band rest on a triangle of red and orange diamond elements. The left side of the band has mostly a red and white stripe pattern with the text “MAXIMUS” in gold cursive font. The far right of the band has a small gold and red crown on a pale yellow diamond. A blue ring surrounds the diamond with the text “INTERNATIONAL” in gold font arranged in a curved fashion. Finally, the remainder of the band has orange, gold, blue, orange, and red design elements. 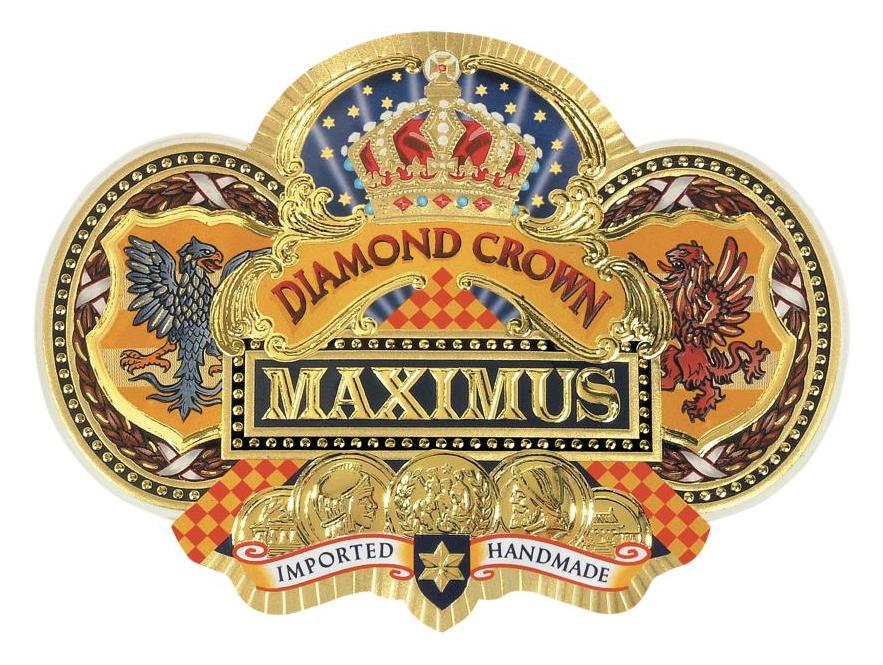 Prior to lighting up the Diamond Crown Maximus Toro No. 4, a straight cut was used to remove the cap. Once the cap was removed, it was on to the pre-light draw experience. The dry draw delivered notes of fruit, cedar, earth, and floral notes. This was an adequate pre-light draw. At this point, it was time to toast up the Diamond Crown Maximus Toro No. 4 and see what the smoking experience would have in store.

The Diamond Crown Maximus Toro No. 4 started out with notes of chocolate, cedar, fruit, and earth on the tongue. The chocolate and fruit notes became primary early on with the cedar and earth notes settling in the background. During the first third, a natural tobacco note displaced the chocolate note. The earth notes slowly increased. On the retro-hale, there was an additional layer of black fruit sweetness along with some black pepper notes.

By the final third, the cedar notes displaced the earth as the primary note. There also was some black pepper that surfaced in the background. Both the earth and pepper joined the natural tobacco, fruit, and savory notes in the background. This is the way the Diamond Crown Maximus Toro No. 4 came to a close. The resulting nub was soft to the touch and cool in temperature.

There was some unevenness on the burn line of the Diamond Crown Maximus Toro No. 4 from time to time. This resulted in some frequent touch-ups. There were more touch-ups than I prefer, but in the end, this kept the burn line relatively straight and kept the cigar on a straight burn path. The ash had a silvery gray color. This wasn’t the firmest ash, but it wasn’t overly loose either. The burn rate and burn temperature were both ideal. 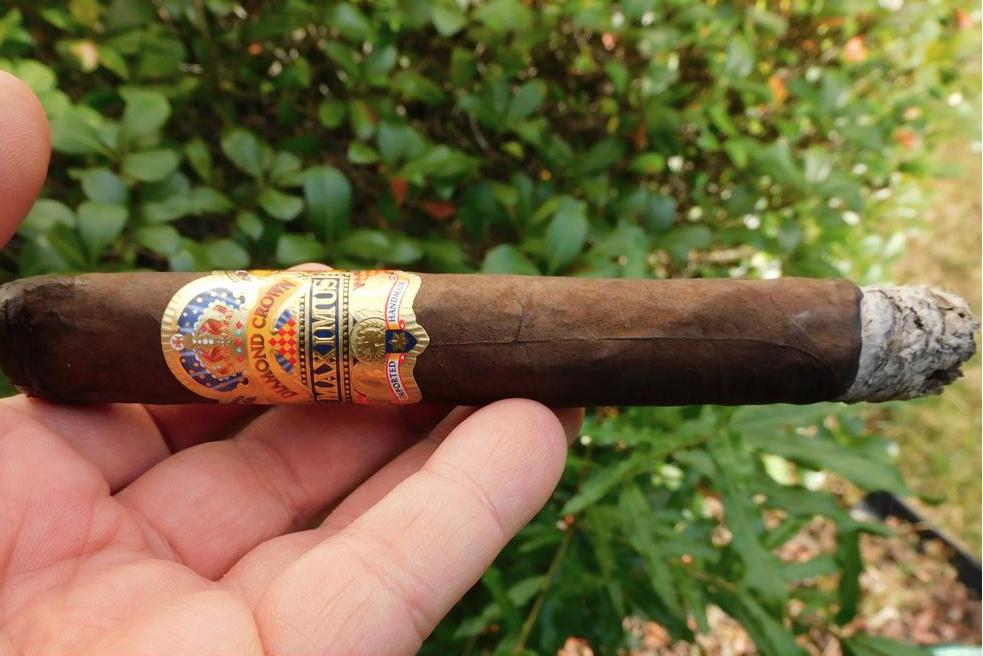 Burn of the Diamond Crown Maximus Toro No. 4

The draw to the Diamond Crown Maximus Toro No. 4 was on the open side. Normally I prefer a little more in the way of resistance on the draw, but in the end, the draw did not have any adverse effects on the overall smoking experience.

In terms of strength and body, the Diamond Crown Maximus Toro No. 4 started out on the upper end of mild to medium. By the second third, the strength and body progressed to the medium range. The increase in intensity leveled off in the second third. When looking at strength versus body, both attributes balanced each other nicely with neither overshadowing the other.

While the Diamond Crown Maximus Toro No. 4 is not a cigar that will overpower you with strength or body, it’s a great example of a cigar that is full-flavored. Along the way there is a nice amount of complexity in terms of flavor nuances and flavor transitions. The problem was the balance in the second half as the increase in cedar notes really threw things off. The goal of this cigar was to produce a full-flavored and spicier cigar – and there certainly is a market for a cigar like this. While I do believe J.C. Newman delivers on producing a full-flavored, spicy cigar; it simply was one that didn’t fit my flavor profile. In the end at $14.75, I’d recommend trying a sample first and seeing if this is the right cigar for you.