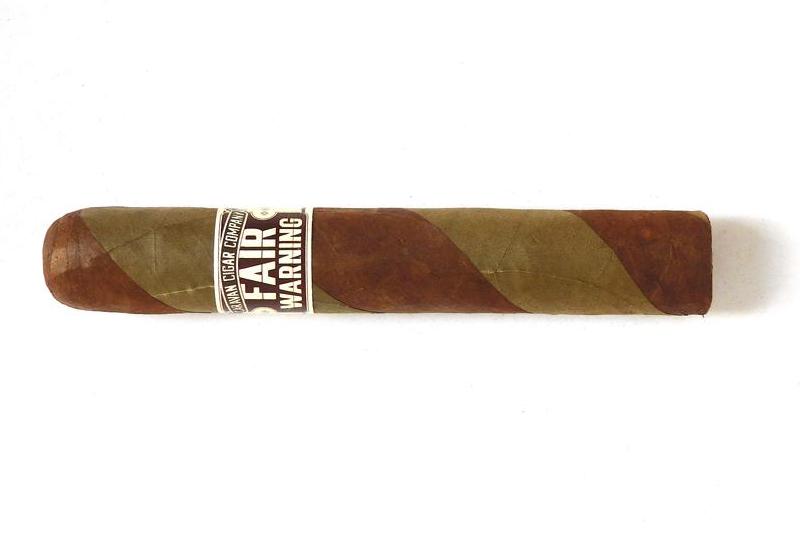 Since its inception, the La Zona factory in Estelí, Nicaragua has been known for cigars that use Ecuadorian Habano or San Andres Maduro wrapper  – and has much success with both of those leaves. At the same time, La Zona has not been a two-trick pony and there have been several other wrappers the factory has had success with – most notably Brazilian (Espinosa Laranja) and Candela (Wasabi) wrappers. Fast-forward to 2019 and at the company’s annual La Zona Palooza festival, it was announced that La Zona would be releasing a barber-pole cigar containing both wrappers. The cigar is called Fair Warning and it is an exclusive cigar for Caravan Cigar Company in Bath, Pennsylvania. Today we take a closer look at the Fair Warning cigar.

In terms of the Candela wrapper, it is one that is probably less commonly used by the La Zona factory than the Brazilian one. In addition to the Fair Warning, Hector Alfonso of La Zona has used the wrapper on MoyaRuiz’s 2016 release, the limited edition Pickle Juice, and uses it (as mentioned) on Espinosa Cigars own regular production line, Wasabi.

Without further ado, let’s break down the Fair Warning and see what this cigar brings to the table.

In addition to the Brazilian and Candela leaves used for the barber-pole, the remainder of the blend for the binder and filler consists of 100% Nicaraguan tobaccos.

Currently, the Fair Warning is offered in one size – a 5 x 52 Robusto. The cigar is packaged in ten-count bundles. 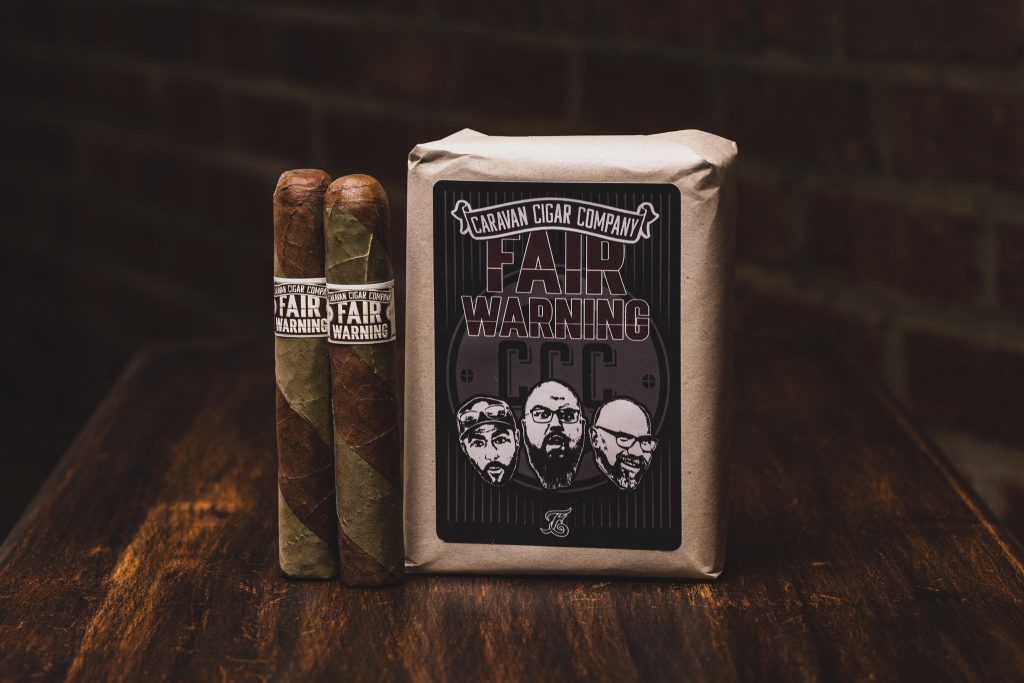 The candela wrapper of the Fair Warning had a weathered green look (as opposed to a bright Kermit the Frog green) while the Brazilian Oscuro wrapper had a roasted coffee bean look with a slight rosado tint. There wasn’t much in the way of oil on each wrapper’s surface. There also was also a slight amount of toothless on the surface. The barber-pole has clean seams the way the wrappers were arranged. There also were some visible veins. As for the cap at the head of the cigar, the Brazilian leaf is used for it.

The band of the Fair Warning had an off-white background. On the center of the band is the text “FAIR WARNING” in off-white font on a brown backdrop. Above that text is a brown-colored ribbon with the text “CARAVAN CIGAR COMPANY.” To the left and right of the center text are a series of brown and off-white “x”s. On the left series, one of the “x”s is a brown colored La Zona “Z” logo. The far left has a Caravan Cigar Company “CCC” logo in brown and off-white. The right has a black square with a black and white “CCC” logo.

The cigar experience of the Fair Warning commenced with a straight cut to remove the cap. Once the cap was removed, it was on to the pre-light draw ritual. The Brazilian leaf around the cap area mitigated most of the candela during the pre-light draw. For the most part, the dry draw produced notes of coffee and cream. While it was a straight-forward flavor profile, it was an excellent one. At this point, it was time to light up the Fair Warning and see what the smoking phase would have in store.

Out of the gate, the combination of black coffee and cream notes continued where the pre-light draw left off. The coffee notes quickly moved to the forefront. The cream and grass notes moved into the background. As the smoking experience of the Fair Warning moved through the early phases, notes of citrus and white pepper also emerged in the background. By the end of the first third, the creamy notes subsided. Meanwhile, there was an additional layer of white pepper on the retro-hale.

During the second third of the Fair Warning, the grassy notes began to surface in the forefront with the coffee. Concurrently the white pepper built up in intensity. By the midway point the grass notes took over as the primary note. The coffee and pepper notes were close secondary notes and the citrus was slightly more distant.

As the Fair Warning moved into the final third, the pepper notes closed in on the grass notes in the forefront. There still were touches of citrus and coffee that remained. By this point, the candela effect was more dominant. This is the way the Fair Warning came to a close. The resulting nub was soft to the touch and cool in temperature.

There was a slight amount of waviness on the burn line of the Fair Warning. This required some touch-ups in order to prevent the burn line from meandering. The number of touch-ups needed wasn’t excessive. The resulting ash wasn’t overly firm, but it wasn’t loose either. This was an ash that had several shades of gray. As for the burn rate and burn temperature, both were ideal. 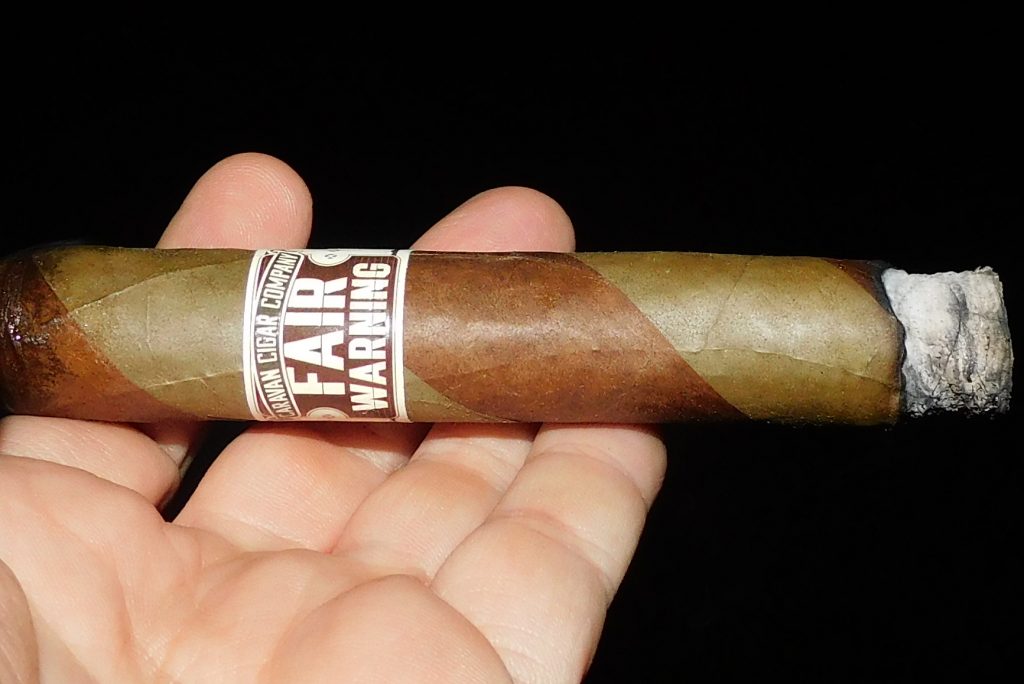 Burn of the Fair Warning

The draw to the Fair Warning performed quite well. This was a draw that had a touch of resistance to it – something that I have always said is a positive. In the end this was still a low maintenance cigar to derive flavor from.

The Fair Warning was a cigar that started out with mild to medium strength and medium-bodied flavors. Both attributes increased in intensity during the smoking experience. By the second half, the strength crossed into medium territory. While there was more in the way of body in the second half, the flavors of the Fair Warning were still in the medium-bodied range of the spectrum.

One comment I’ll mention is on the packaging. I’ve been increasingly more critical of paper wrap being used in lieu of cellophane on bundle offerings. The paper wrap doesn’t allow you to see the cigar on the retail shelf. While I admire some of the graphic designs used to dress up the bundle itself, in the case of the Fair Warning I think cellophane would have been a better option simply because the contrast of the Brazilian and Candela wrappers is something that should be front and center. While Cigar Coop doesn’t score for appearance, this is a beautiful cigar.

The Fair Warning is going to deliver the best of both worlds – the rich coffee flavors often derived from a Brazilian wrapper and some of the grassy flavors from the candela. Early on the coffee notes will be more dominant, while later the grassy notes will take over. At the same time, the pepper gives the Fair Warning “the Espinosa bite” while the citrus imparts the right amount of sweetness.  Overall, this is a fine offering for Caravan Cigar Company. It’s a cigar I could recommend to any cigar enthusiast. It’s a cigar I would certainly smoke again and buy multiples to keep in my humidor.