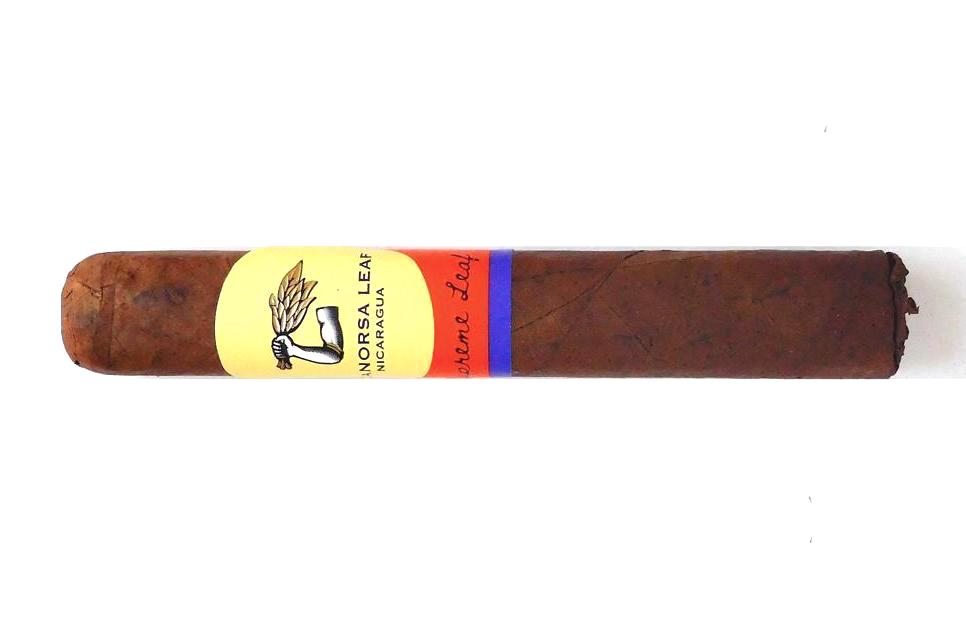 Late in 2019, Aganorsa Leaf announced a new limited-production line that would make its debut at January 2020’s Tobacco Plus Expo show in Las Vegas known as Supreme Leaf. Over the years Aganorsa Leaf (previously known as Casa Fernandez Cigars) has garnered a reputation for the”leaf” (a.k.a. tobacco) it grows as being some of the best produced in the world. The Aganorsa Leaf Supreme Leaf pays homage to that as it is comprised of 100% of tobaccos grown from the Aganorsa farms in Nicaragua. Packaging-wise, the Supreme Leaf stands out because of its bold and vibrant color scheme on both its band and box. Today, we dive closer into the first vitola released in the Supreme Leaf line – the Robusto.

At this point, let’s turn our attention back to the cigar itself and see what the Aganorsa Leaf Supreme Leaf Robusto brings to the table.

As mentioned above, the Aganorsa Leaf Supreme Leaf consists of 100% Nicaraguan tobaccos from the Aganorsa farms. The blend is described as Corojo 99 dominant. Production is handled at the company’s TABSA factory in Estelí, Nicaragua.

To date, there have been two box-pressed sizes released, Robusto (500 boxes) and Toro (1,500 boxes). Each of the two sizes is presented in ten-count boxes.

At press time, Aganorsa Leaf has indicated a third size of the Supreme Leaf in the form of a Corona Gorda will hit the stores early in 2021.

The Nicaraguan wrapper to the Aganorsa Leaf Supreme Leaf Robusto had a strong cinnamon tint to it. Upon closer examination, some mottling was present on the surface. The wrapper did not have much in the way of oil on the surface. There were some visible veins and some thin wrapper seams. The cigar itself had a soft Cuban-press with a covered foot.

Prior to lighting up the Aganorsa Leaf Supreme Leaf Robusto, a straight cut was used to remove the cap. After the cap was removed, it was on to the pre-light draw experience. The cold draw was relatively simple and straight forward – producing a mix of dusty earth and a subtle natural tobacco sweetness. While it wasn’t a very flashy pre-light draw, it still was a satisfying one. At this point, it was time to toast up the foot of the Aganorsa Leaf Supreme Leaf Robusto and see what the smoking phase would have in store.

The start of the Aganorsa Leaf Supreme Leaf Robusto delivered more in the way of the natural tobacco and dusty earth notes, but there were plenty of other accompanying flavors including dried fruit, baker’s spice, wood, and a combination of black and white pepper. It didn’t take long for the earth and natural tobacco notes to move into the forefront. The dried fruit, baker’s spice, wood, and pepper settled in the background. There also was an additional layer of black pepper on the retro-hale.

The earth and natural tobacco remained in the forefront at the start of the second third of the Supreme Leaf Robusto. There was a slight increase in the fruit, pepper, and wood notes. During the second third, the baker’s spice present in the background morphed to a cedar note. Just past the midway point, the dusty earth also diminished into the background leaving the natural tobacco as the sole primary note.

As the final third of the cigar experience started, the natural tobacco notes remained grounded in the forefront. The cedar and pepper notes were the most dominant primary notes. Further back were the wood notes, and in the distant background were some of the fruit notes. This is the way the Supreme Leaf Robusto came to a close. The resulting nub was firm to the touch and cool in temperature.

There was a slight amount of unevenness and waviness on the burn line of the Supreme Leaf Robusto. This resulted in some touch-ups that were needed during the cigar experience. While the touch-ups kept the burn on track, the cigar did need more touch-ups than I preferred. The resulting ash had a salt and pepper color scheme to it. While this was a firm ash, there still was some minor flaking along the way. The burn temperature was ideal.

The Supreme Leaf Robusto was a slow-burning cigar, taking an average of 1 hour 47 minutes to smoke. The slow burn rate had no adverse effects on the smoking experience. It simply made for a longer smoking experience – which was a positive in this cigar’s case. 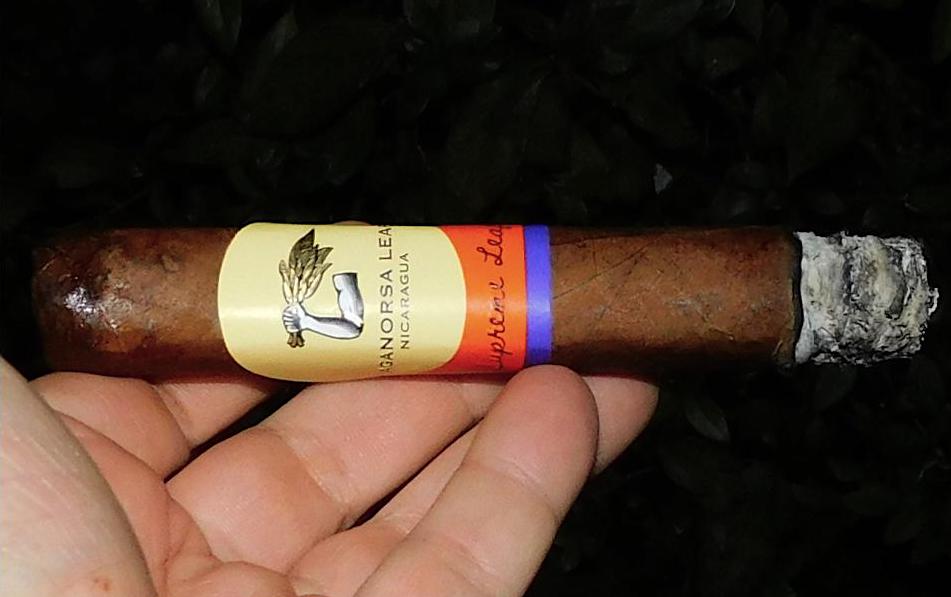 In terms of strength versus body, the variances in the intensity levels of strength and body led to different points throughout the smoking experience in terms of which attribute had the edge.

At Cigar Coop, the review schedule is not perfect. The philosophy is to avoid “off the truck” reviews, but at the same time, we don’t like to publish too late. In this case, the Aganorsa Leaf Supreme Leaf Robusto wasn’t reviewed until some nine months after its release. At the same time, I had smoked this when it was released earlier in 2020. This is noteworthy because, in the nine months of aging, the Aganorsa Leaf Supreme Leaf Robusto is a cigar that came into its own. The flavors became better developed and there were much more in the way of flavor nuances that gave this cigar more in the way of complexity. There was a slight drop off in the flavors in the final third, but in this case, the positives outweighed the minuses.

In the end, the Aganorsa Leaf Supreme Leaf Robusto is a cigar that I would recommend to an experienced cigar enthusiast, but I certainly would not discourage a novice from trying.  As for myself, this is definitely a cigar I would smoke again. Unless there is a subsequent release, these Robustos are going to be very difficult to find. If you do find them and a box purchase is possible – do it. At 91 points, the Supreme Leaf Robusto exceeds our 90 point base for standard of excellence.