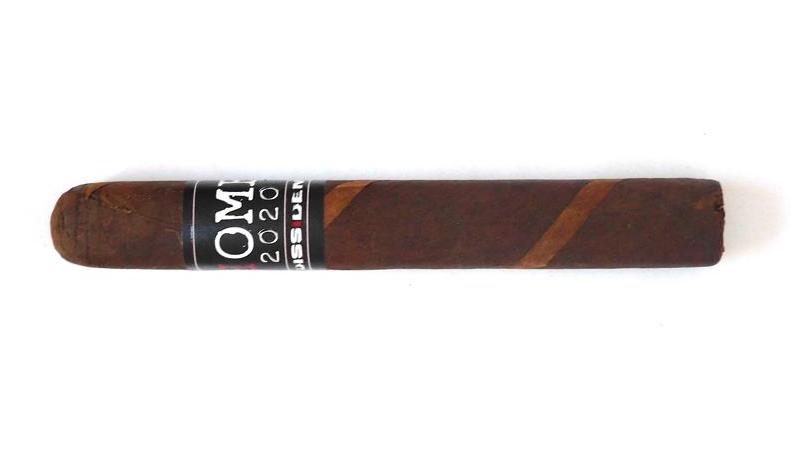 In 2020, Dissident Cigars released the second edition of its limited edition line known as Home. The story of the Home cigar traces back to when Dissident Cigars was originally launched several years ago.  The brand Dissident was launched in 2013 by Jason Webster and Neil Edwards, who were the owners of The Humidor in Wichita, Kansas. The brand was associated with Gordon Crippen and Ryan Johnson, who served as the faces of the brand. After launching two regular production lines, the brand had plans in 2015 to release a limited edition called “Home.”. Some pre-release cigars started making it around, but soon Crippen and Johnson would depart Dissident and the brand became dormant without the Dissident Home being released. Fast forward to 2019 when Benjamin Holt would acquire the brand. Holt would overhaul the blends, including Home. Today we take a closer look at the Dissident Home 2020, the second edition of the revamped Home. 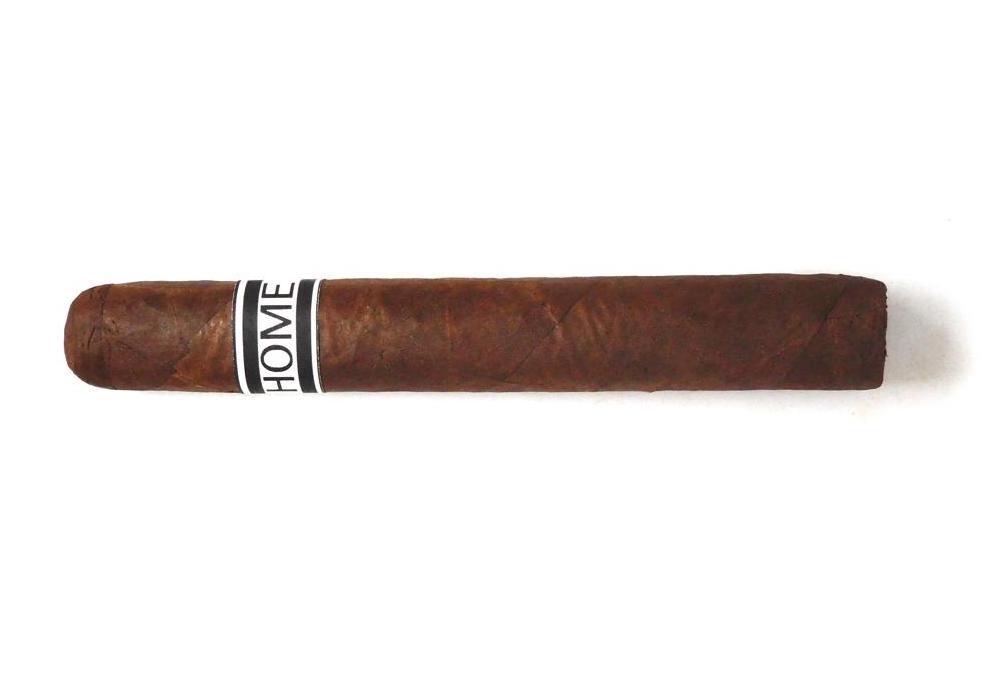 The original Dissident Home that was planned for release in 2015 was a Honduran puro. The revamped Dissident 2019 blend is multi-national blend box-pressed Barber-Pole. Holt also put his own interpretation of what the Home brand meant by saying, “In the process of blending this cigar I really tried to focus on what the name Home meant to me in the context of cigars. I kept reflecting back on how much I love Estelí tobacco and the first time I spent at Fabrica Oveja Negra. Fabrica Oveja Negra creates fantastic artisan cigars and it instantly became a no brainer for me to highlight these tobaccos in this way. I’m very proud of this cigar and how it brings out the flavor that I feel is the taste of Estelí.”

Without further ado, let’s break down the Dissident Home 2020 and see what the experience will be.

The Dissident 2020 is a “dark” barber-pole. While most barber-poles have a light wrapper contrast with a darker wrapper, the Maduro and Corojo wrappers are on the darker side. Both wrappers, along with the binder are from Ecuador. The fillers come from Nicaragua. It is worth noting the blend components in 2020 are close to the 2019 version. As with all Dissident cigars, production Fabrica Oveja Negra in Estelí, Nicaragua.

The barber pole wrapper of the Dissident Home 2020 contrasted a coffee bean color for the maduro wrapper and red clay color for the corona wrapper. There was not much in the way of oil on the surface. The seams were clean in terms of how the wrapper was twisted on the cigar. There were very few veins on the surface. As for the box-press, this was a sharper press.

A straight cut was used to commence the cigar experience of the Dissident Home 2020. Once the cap was removed it was time to commence the pre-light draw. The cold draw delivered notes of earth, coffee, licorice and cedar. Overall this was a satisfactory pre-light draw experience. At this point, it was time to light up the Dissident Home 2020 and see what the smoking experience would have in store.

The Dissident Home 2020 opened up with notes of earth, black licorice, coffee, and cedar. This was soon joined by notes of black pepper. The earth, licorice, and coffee notes moved into the forefront earlier on with the cedar and pepper settling in the background. The licorice emerged as the sole primary note. Meanwhile, there was a layer of black pepper and licorice on the retro-hale.

During the second third of the Dissident Home 2020 the coffee notes remained in the forefront. In the background there was a slight increase in the black pepper. There also were secondary notes of earth, licorice, and cedar. During this phase, there were some chocolate notes that also emerged in the background.

As the Dissident Home 2020 reached the final third, there wasn’t much in the way of change. The coffee notes remained primary, rounded off by background notes of earth, licorice, cedar, and chocolate. This is the way the cigar experience of the Dissident Home 2020 came to a close. The resulting nub was soft to the touch and cool in temperature.

The Dissident Home 2020 maintained a relatively straight burn path and straight burn line during the earlier phases. As the cigar experience progressed I did find some more in the way of touch-ups that were needed. The resulting ash was firm with a salt and pepper color. As for the burn rate and burn temperature, both were in the ideal range. 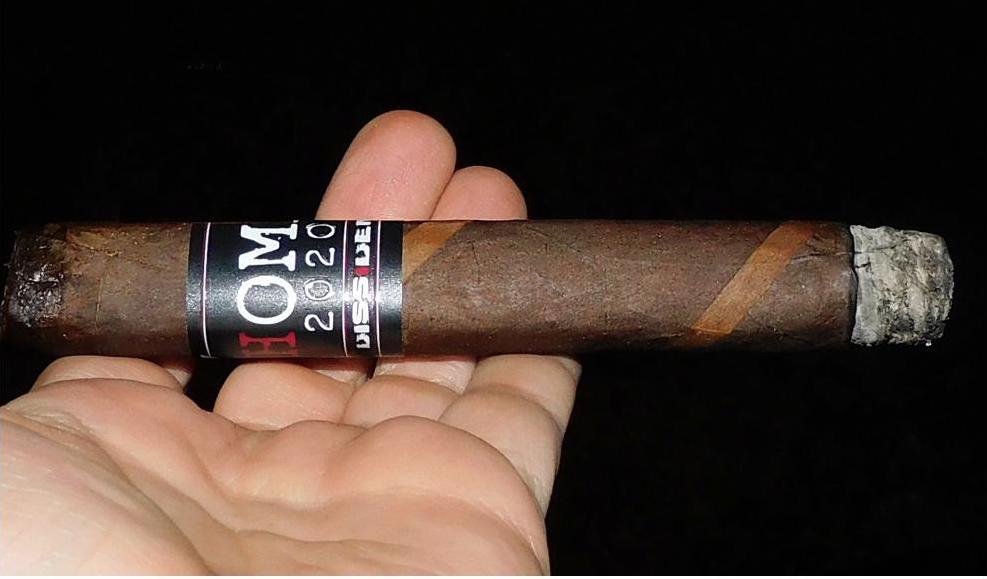 Burn of the Dissident Home 2020

The Dissident Home 2020 had an open, but not a loose draw. Normally box-pressed cigars are packed a little looser, but in this case I still would have preferred a touch of resistance. In the end, this cigar still performed well with its draw – and it was a low maintenance cigar to derive flavor from.

The Dissident Home 2020 delivered a medium strength cigar from start to finish. As for the body, it started out in the medium range, but by the second half, this cigar moved into medium to full-bodied territory. In terms of strength versus body, there was an edge to the body which increased as the cigar experience progressed.

The original Dissident Home 2015 might rank as one of best pre-release cigars that never made it to market. It’s unfair to compare the revamped Dissident Home 2019 and 2020 editions to that cigar. The Home is a completely different cigar than that original 2015 pre-release. While some of the flavor notes you get from this cigar are unmistakably Oveja Negra, this cigar smokes completely differently than the sibling Oveja Negra brands of Black Label Trading Company, Black Works Studio, and Emilio. Benjamin Holt has done a very good job at delivering excellent products with his interpretation of the Dissident brand. The Dissident Home 2020 is a cigar I would recommend to any cigar enthusiast. At $14.00, it is pricey, but certainly worth picking up and enjoying. It’s one I would smoke and purchase again.