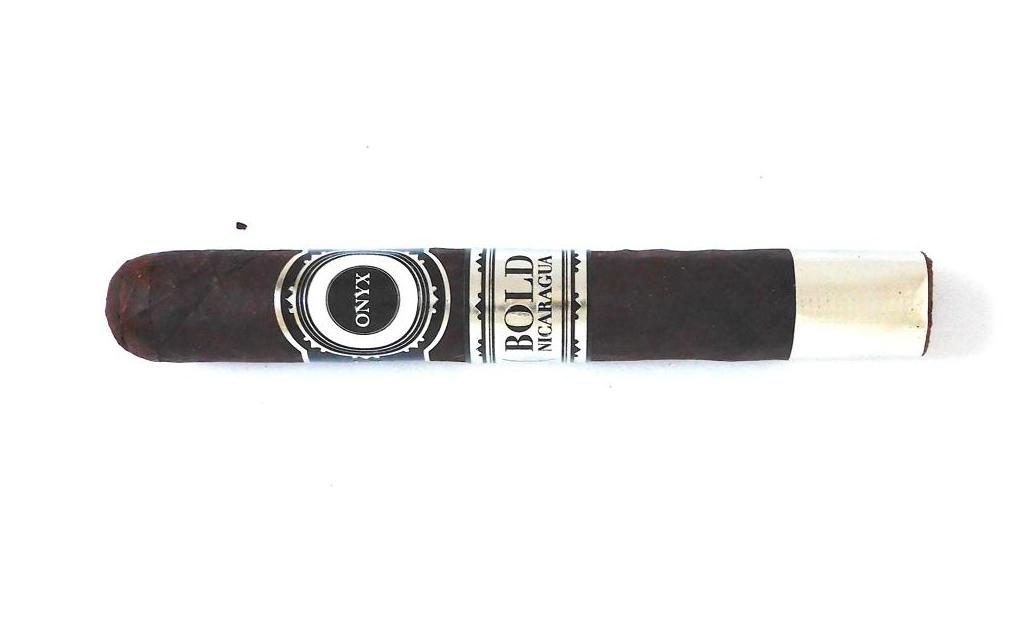 Altadis USA’s portfolio of cigars has always been one that has interested me. It’s a combination of classic heritage brands, and newer more contemporary brands. From the classic side, brands such as Montecristo, Romeo y Julieta, and H. Upmann have been staples. On the contemporary side, we’ve seen Altadis bring in Aging Room, and more recently Oliveros through a strategic partnership with Boutique Blends. Altadis has also launched several contemporary brands in its history on its own, and one such brand is Onyx. The Onyx brand for several years has been somewhat quieter. In 2018, Altadis moved to shine some more spotlight on this brand when the Onyx Reserve blend was repackaged. Last year, Altadis took another step when it created a new line under Onyx known as Onyx Bold Nicaragua. The company turned to one of its Nicaraguan manufacturing partners, AJ Fernandez, to work with Director of Product Capability Rafael Nodal to develop Onyx Bold Nicaragua. Today, we take a closer look at the Onyx Bold Nicaragua in the Toro size.

Onyx is the name of a semiprecious stone that forms in bands of different colors such as black and white. It’s the black color that is the most striking. The one thing that Onyx Reserve and Onyx Bold Nicaragua have in common is the dark-colored wrappers. Onyx Reserve uses Connecticut Broadleaf and is still produced in the Dominican Republic. Onyx Bold Nicaragua uses a San Andres Maduro leaf for its wrapper. As the name indicates, it is positioned to showcase the bold flavors Nicaraguan tobacco is known for – and is produced at AJ Fernandez’s factory in Nicaragua.

Without further ado, let’s break down the Onyx Bold Nicaragua Toro and see what this cigar brings to the table.

In addition to the San Andres wrapper, the remainder of the blend features all Nicaraguan tobaccos for the binder and filler.

The Onyx Bold Nicaragua is offered in three sizes.  Each is presented in 20-count boxes. 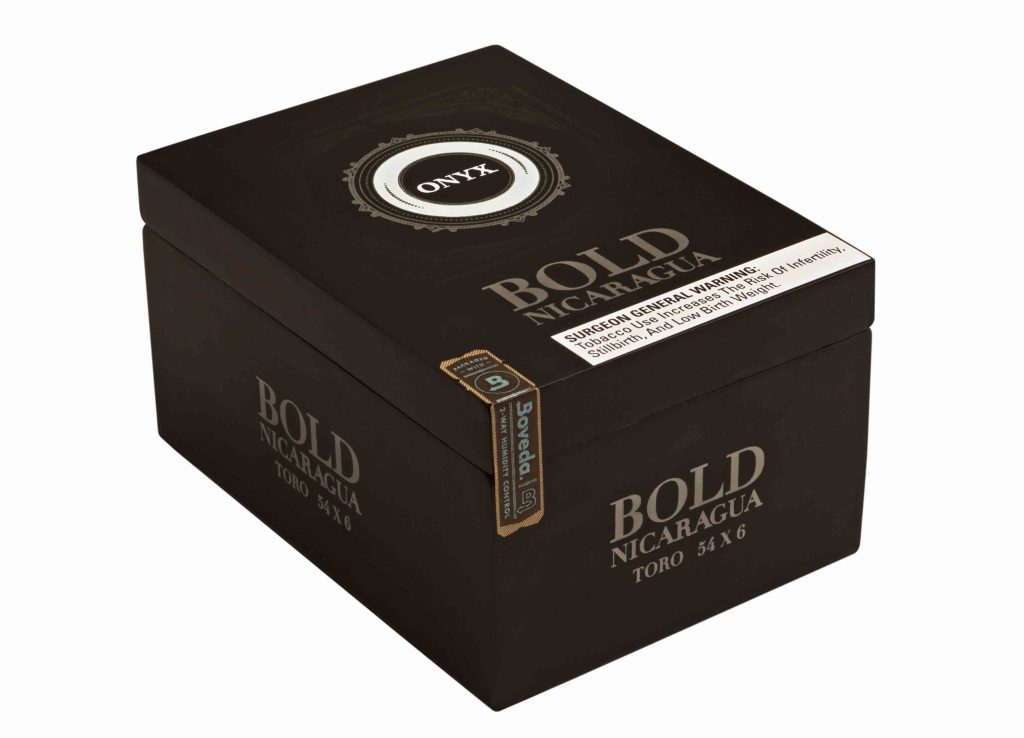 The San Andres Maduro wrapper of the Onyx Bold Nicaragua Toro had a classic dark chocolate color. This was a smooth wrapper with a thin coating of oil on it. Any visible veins and any visible wrapper seams were both on the thin side.

There are two bands on the Onyx Bold Nicaragua. The primary band had a mostly black background. On the center of the band is a black circle surrounded by gray, silver, and black rings. The outermost ring is silver with a pattern reminiscent of mountains. On the center of the band is the text “ONYX” in a silver-gray font. The left and right side of the band has the text “RESERVE” in silver-gray font with a silver pinstripe above and below the text. The outer edge of the band has silver trim.

The secondary band has a silver background. There are several black stripes, with the outermost stripe having the pattern of mountains on it. On the center of the band is the text “BOLD NICARAGUA” in black font surrounded by parentheses. There is a black pinstripe running through the center of the band on the left and the right side. The edge of the bands is trimmed in black.

In addition, there is a silver ribbon surrounded the footer of the cigar.

After removing the ribbon of the Onyx Bold Nicaragua Toro, a straight cut was used to remove the cap of the cigar. Once the cap was removed, it was on to the pre-light draw experience. The cold draw delivered a mix of mocha (a fusion of chocolate and coffee), natural maduro (what I term a fusion of natural tobacco and dried fruit). Overall this was a very good pre-light draw. At this point, it was on to light up the Onyx Bold Nicaragua Toro and see what the smoking phase would have in store.

The Onyx Bold Nicaragua Toro started out with a short spurt of white pepper. This gave way to notes of mocha and maduro sweetness which emerged as the primary note. For the most part, the mocha notes had the edge. As the white pepper settled into the background, it was joined by mineral and earth notes. Meanwhile, there was a combination of white pepper and cedar that was present on the retro-hale.

As the Onyx Bold Nicaragua Toro moved through the second third, the mocha and maduro sweetness remained the primary notes. As in the first third, the mocha component had a slight edge. There also was a slight increase in the pepper and mineral. The pepper increased more rapidly than the mineral. Just past the midway point, the chocolate component of the mocha dissipated, leaving a black coffee note in the forefront.

The burn of the Onyx Bold Nicaragua Toro performed extremely well. This was a cigar that maintained a straight burn path and straight burn line from start to finish. The resulting ash was a silver-gray color. This ash skewed toward the firmer side. Meanwhile, the burn rate and burn temperature maintained ideal levels. 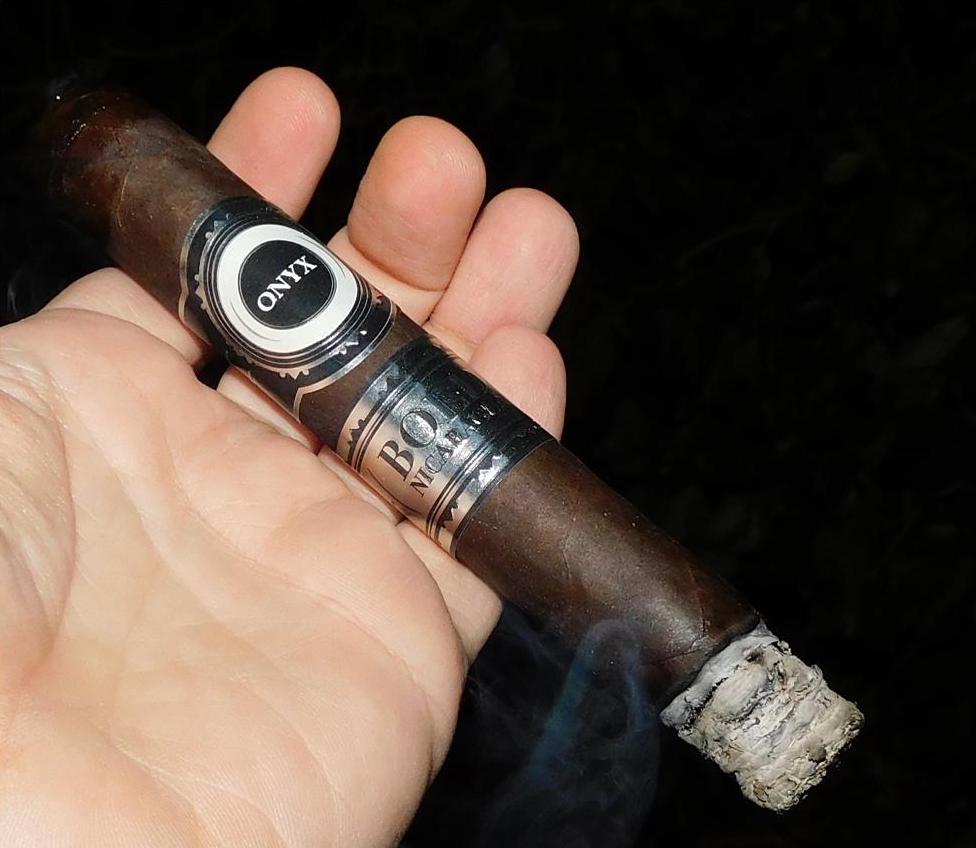 The draw to the Onyx Bold Nicaragua Toro also performed extremely well.  There was a touch of resistance to it, which is something I prefer. At the same time, this was a low maintenance cigar to derive flavor from. This was also a cigar that produced an ample amount of smoke.

In terms of strength and body, the Onyx Bold Nicaragua Toro delivered a medium strength, medium-bodied cigar. There was a nominal increase in the intensity levels of both attributes, but the increase wasn’t enough to push the cigar into medium to full territory. The strength and body balanced each other nicely with neither attribute overpowering the other.

With a name like “bold,” the assessment of the Onyx Bold Nicaragua being “medium” might seem like the cigar underwhelmed. This was not the case. The boldness from Onyx comes from the robustness of the flavors – and that is something that is a real positive with this cigar. The pepper and mineral notes reminded me very much that this cigar is Nicaraguan. I also was very impressed with the construction of this cigar. This is a cigar I could recommend to any cigar enthusiast. As for myself, it is a cigar I would smoke and buy again. At 90 points, it reaches the threshold for the Cigar Coop Standard of Excellence.