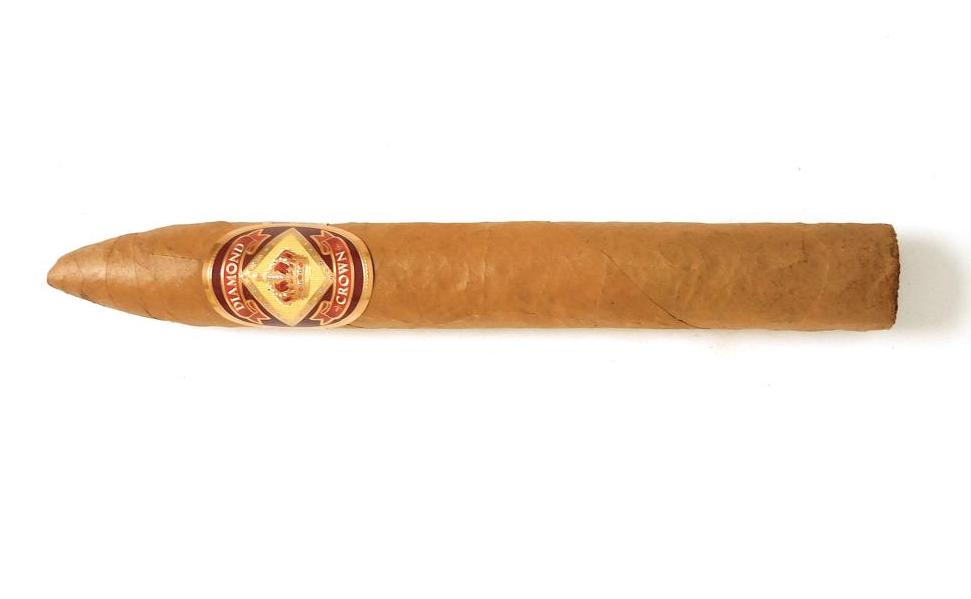 Diamond Crown is a brand in the J.C. Newman portfolio that is positioned as the company’s ultra-premium line. The genesis of this line goes back to the 1990s, when past J.C. Newman Cigar Company President Stanford Newman wanted to create a cigar for the company’s 100th anniversary which would be celebrated in 1995. Newman would turn to Carlito Fuente to help create this cigar to commemorate the occasion. According to J.C. Newman, “Stanford dreamed of making the best cigar in the world with no regard for how long it would take or how much it would cost, his dream was realized in the Diamond Crown cigar.” Today we take a look at a cigar offered in that original line, the Diamond Crown Pyramid No. 7. This is a figurado-shaped offering in the Diamond Crown line. 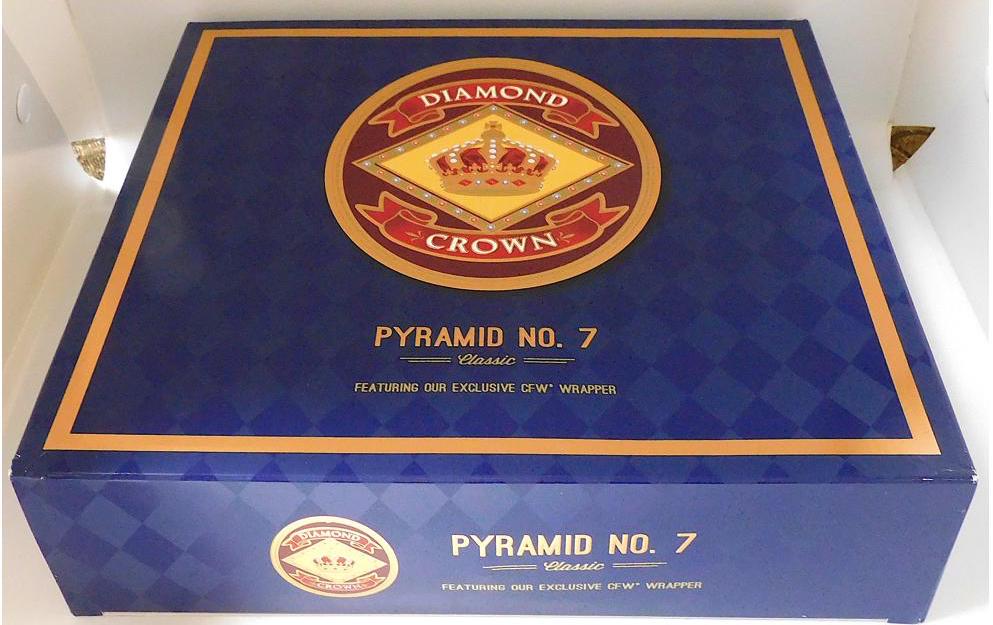 Outer box of the Diamond Crown Pyramid No 7 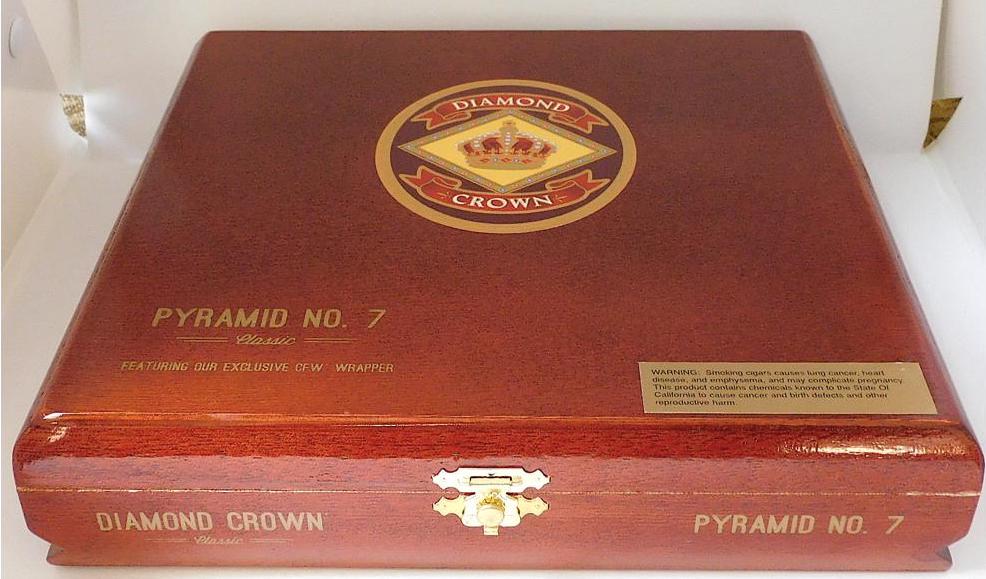 Closed box of the Diamond Crown Pyramid No 7

For now, we will turn our attention to the Diamond Crown Pyramid No. 7 and see what this cigar brings to the table.

The blend of the Diamond Crown line consists of seven tobaccos, most of them undisclosed. The cigar itself is highlighted by what J.C. Newman called a Connecticut Shade CFW (Connecticut Fermented Wrapper). While many wrappers are normally given a single fermentation; in the case of the Diamond Crown wrapper they are conditioned, graded and selected for a second fermentation.

There are eight different ongoing production sizes of the Diamond Crown line. The common denominator of this line is that each cigar (except one) has a 54 ring gauge. This was a size that Stanford Newman said would facilitate combining the seven different tobaccos that go into the blend. Back in 1995, the use of this ring gauge was virtually unheard of. 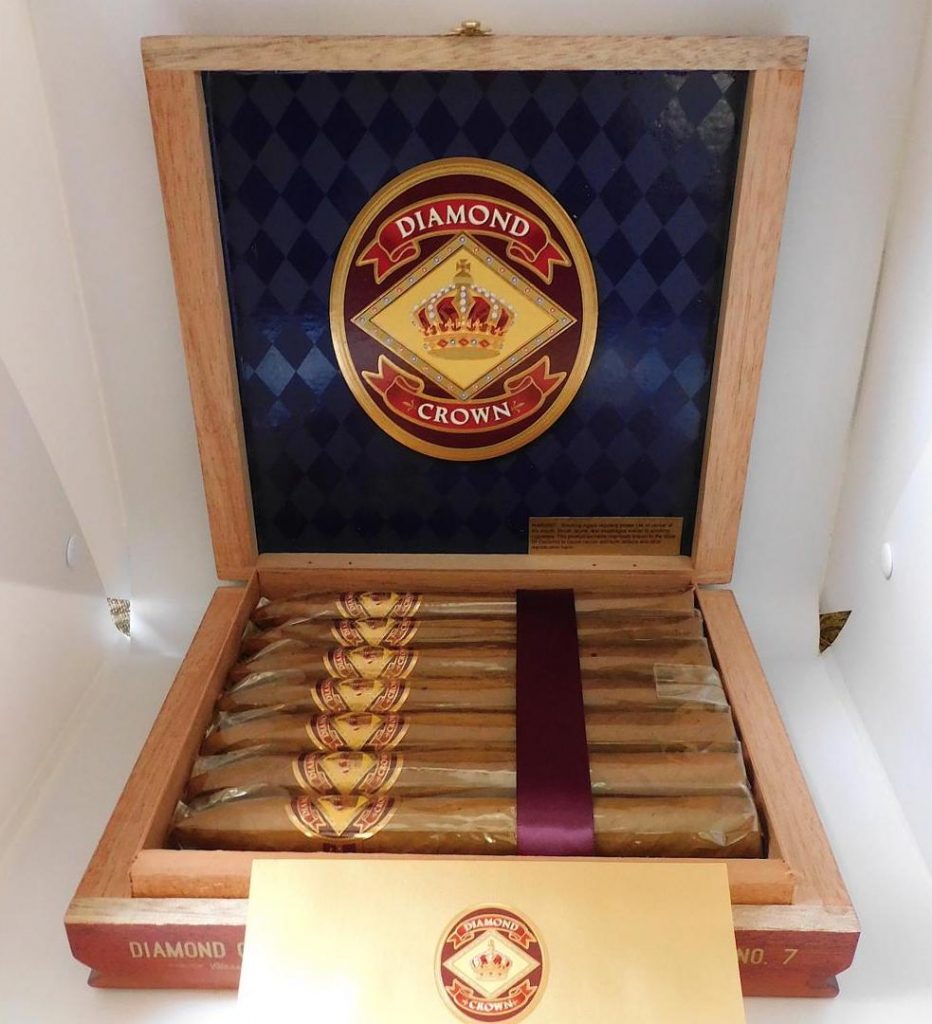 Open box of the Diamond Crown Pyramid No 7

The CFW wrapper of the Diamond Crown Pyramid No. 7 had a light brown look with a slight rosado tint. J.C. Newman says the rosado tint comes from the two-step fermentation process. The wrapper itself had a weathered look. This was not a smooth wrapper as it was somewhat on the bumpy side. There were some thin visible veins and thin visible wrapper seams. There was a somewhat gentle taper from the base of the cigar to the tip. 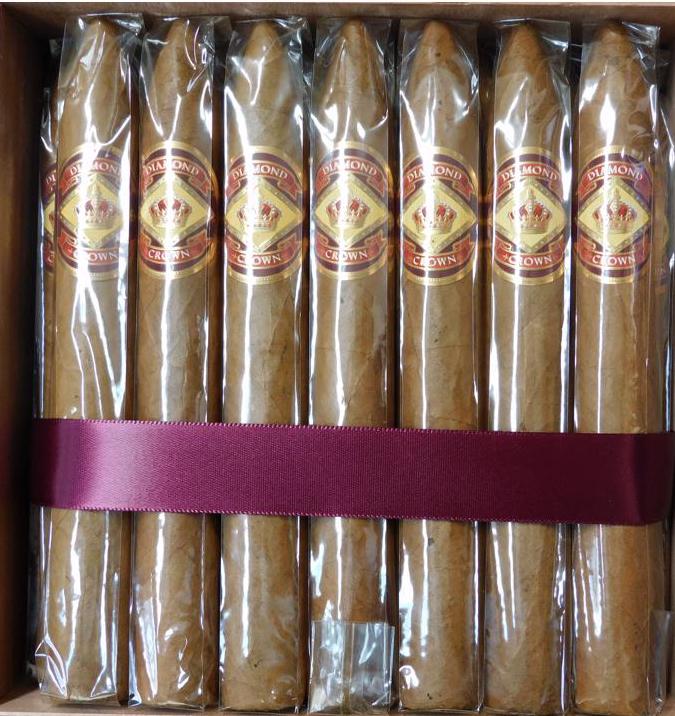 Packaging close-up of the Diamond Crown Pyramid No 7

The band of the Diamond Crown has a mostly red and gold color scheme. On the center of the band is a light yellow diamond-shaped field with gold trim. On the center of the diamond field is a red and gold crown. Above the diamond is a red ribbon with the text “DIAMOND” on it. Below the diamond is another red ribbon with the text “CROWN on it”. The left side of the band has the text “Dominican Republic” sitting on two red stripes. The far right of the band has a small yellow diamond with a blue and gold “JCN” (representing the J.C. Newman logo).

A straight cut was used to remove the tip of the Diamond Crown Pyramid No. 7. About half of the tip was removed to allow for the tapering effect to be enjoyed during the cigar experience. Once the tip was removed, it was on to the pre-light draw experience. The dry draw delivered a mix of cream, vanilla, and a slight cedar note. Overall this was a satisfactory pre-light draw experience. At this point, it was time to toast up the foot of the Diamond Crown Pyramid No. 7 and see what the smoking experience would have in store.

The Diamond Crown Pyramid No. 7 started out with notes of cream, cedar, vanilla, and toast. The cream and cedar notes moved into the forefront early on with the vanilla and toast notes settling in the background. During the first third, the cream and cedar notes alternated in intensity. Meanwhile, on the retro-hale, there was a combination of cedar and pepper with touches of toast mixed in.

The second third of the Diamond Crown Pyramid No. 7 saw the cedar notes take over as the primary note. Occasionally the toast notes popped into the forefront. The pepper and vanilla notes remained in the background. The cream notes diminished significantly during the second third of the smoke.

As the cigar reached the final third, the pepper notes started to increase and came close to moving into the forefront. Overall the cedar notes remained primary while the vanilla, toast, and to a lesser extent, some cream notes remained secondary. This is the way the Diamond Crown Pyramid No. 7 finished up. The resulting nub was slightly soft and cool in temperature. 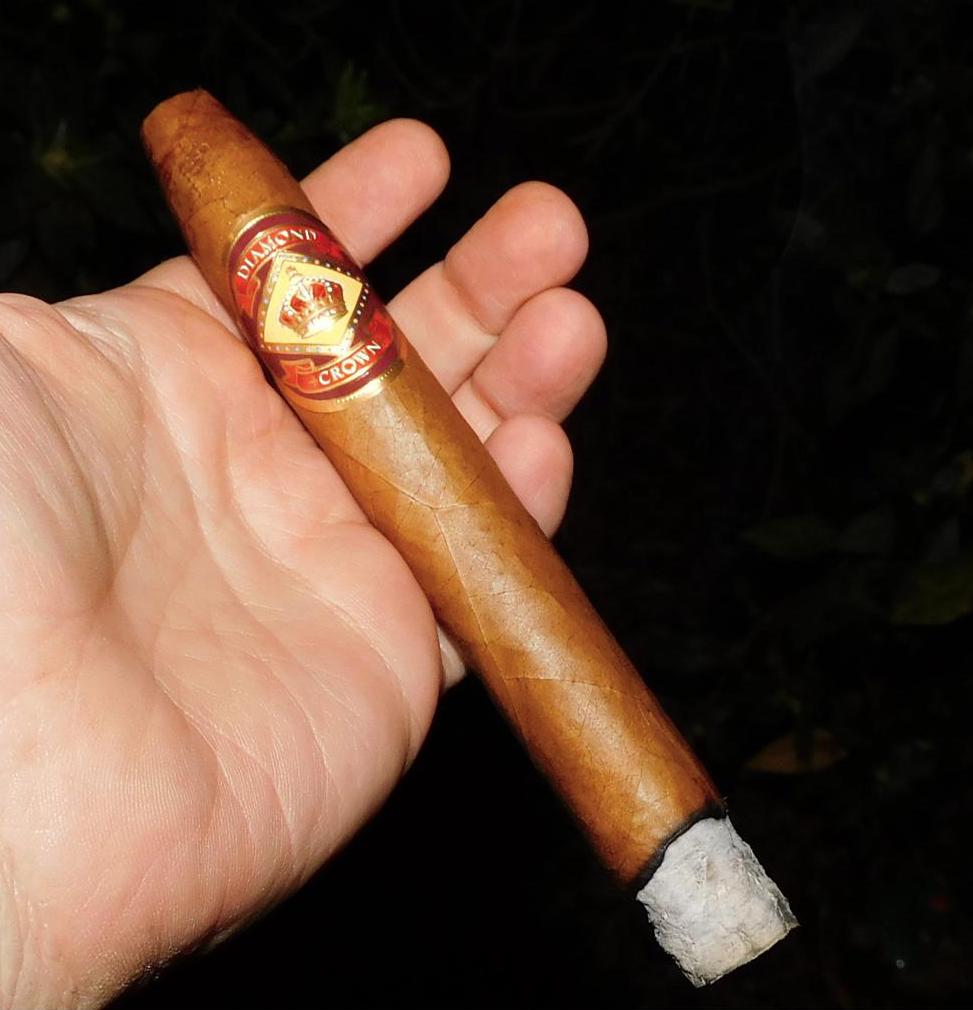 Burn of the Diamond Crown Pyramid No 7

If you are looking for a Connecticut Shade cigar that “isn’t your father or grandfather’s Connecticut cigar,” the Diamond Crown Pyramid No 7 is not going to be a cigar that falls into that category. This is a cigar that started out with mild strength and mild to medium-bodied flavors. Both the strength and body increased along the way. By the midway point, the strength moved into mild to medium territory and in the last third, the flavors inched into medium-bodied range.

In terms of strength and body, the body maintained a slight edge.

The Diamond Crown Pyramid No. 7 scores very nicely. The cigar has excellent construction and an excellent flavor profile. I liked how this cigar performed in a figurado format. In general, I found the tapering effect enhanced the overall flavor experience – giving this dialed back blend a little boost in intensity when the flavors were delivered to the palate in a more concentrated format. At $20 plus dollars, this isn’t an inexpensive cigar, but it is one worthy of being an ultra-premium offering. It’s a cigar that I’d recommend to any cigar enthusiast looking for a milder cigar. As for myself, this is a cigar I would smoke again and buy multiples to keep in the humidor. At 90 points, this cigar reaches the Cigar Coop Standard of Excellence threshold.