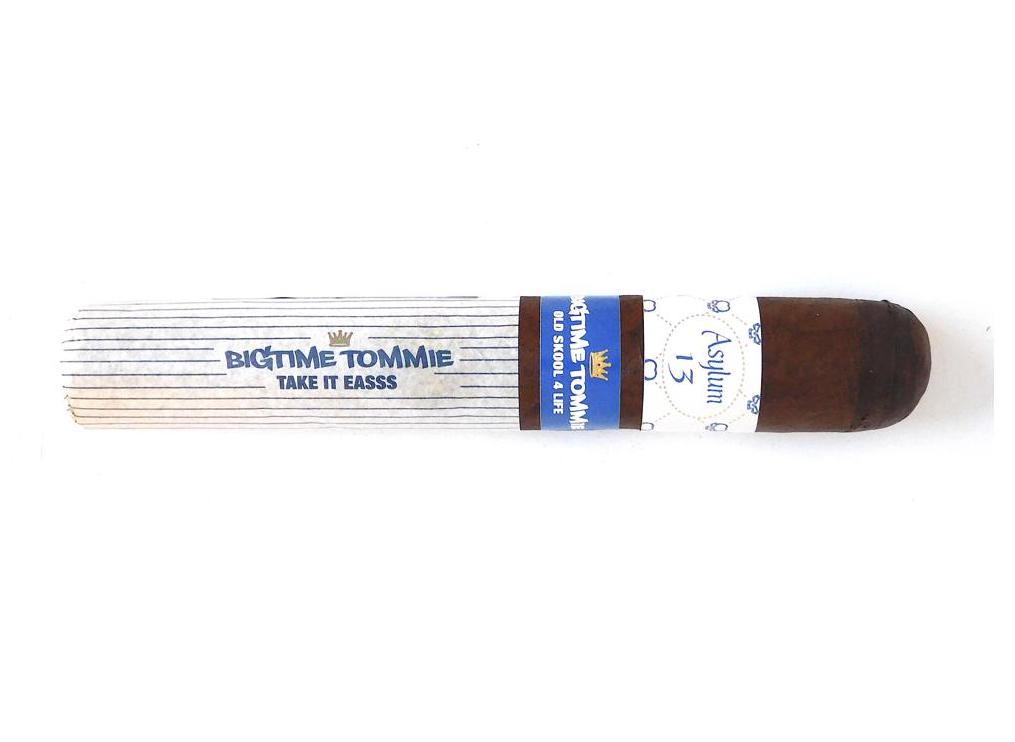 If there is one thing that is guaranteed to get both people in the cigar industry or hard-core cigar enthusiasts excited, it is when they see a premium cigar product make it into mainstream channels. Look no further when a team wins a championship and is smoking a cigar – often the question on many cigar enthusiasts’ minds is what is the cigar that is being smoked. In the case of reality show star “BigTime” Tommie Romola, this would lead to him getting his own cigar through Asylum Cigars. Romola had been a fan of Asylum Cigars and was seen smoking the cigar on America’s Got Talent. Soon after, Asylum Cigars co-founder Tom Lazuka got word that Romola was a fan and was put in touch with him. The two talked on the phone and Romola asked to have his own cigar made. The wheels were put in motion for the Asylum 13 BigTime Tommie release. Today we take a closer look at the Asylum 13 BigTime Tommie in the 70 x 7 size.

On KMA Talk Radio Episode 419, Romola told the story of how he hooked up with Lazuka and also discussed his involvement in the project. Romola couldn’t go down to Nicaragua due to the COVID-19 pandemic, but was given the opportunity to sample several blend candidates and pick which blend would be used for his cigar. Romola was also involved in working with Asylum in providing input for the packaging.

Without further ado, let’s turn our attention to the Asylum 13 BigTime Tommie and see what this cigar brings to the table.

The Asylum 13 BigTime Tommie consists of 100% Nicaraguan tobaccos. Production is handled in Nicaragua at the NACSA factory.

There are two bands on the Asylum 13 Big Time Tommie. The primary band uses a similar design to what is seen on many other Asylum 13 cigars, but with a different color scheme. The band has a glossy white background. In blue font is “Asylum 13” on the white background.  There is a thin blue chain-link design on the front of the band. There is a pattern of blue skulls scattered across the band. 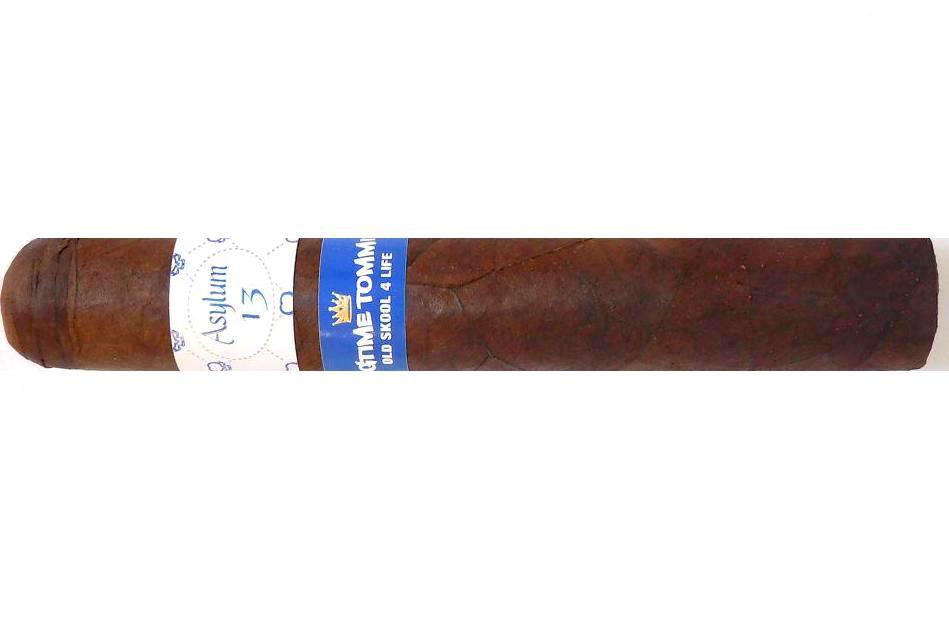 Each cigar has a white tissue sleeve with blue pinstripes covering the lower half of the cigar from the footer up. The blue pinstripes represent Romola’s New York roots and love of the New York Yankees. On the sleeve is another gold crown and the text BIGTIME TOMMIE” in blue font. Just below that is the text “TAKE IT EASSS” (another expression of Romolas’s) in blue font. One reason the tissue sleeve is used is that Asylum Cigars co-owner Christian Eiroa has been on the record for his dislike of cellophane.

When smoking a 70 ring gauge cigar, I highly recommend using a cutter that is large enough to remove the cap. This is exactly what I did when a straight cut was used to remove the cap of the Asylum 13 BigTime Tommie 70 x 7. Once the cap was removed, it was on to the pre-light draw. The cold draw delivered notes of coffee, citrus, and wood. Overall, this wasn’t the most exciting pre-light draw. Since the pre-light draw is not factored into the numerical score or value ratings, there was no loss of points here. At this point, it was time to light up the Asylum 13 BigTime Tommie 70 and await what the smoking phase would have in store.

The Asylum 13 BigTime Tommie 70 x 7 started out with notes of black coffee, wood, white pepper, and citrus. Early on the coffee and citrus notes moved to the forefront. The wood and pepper notes settled in the background. Concurrently the cigar delivered an additional layer of pepper and citrus on retro-hale.

During the second third of the Asylum 13 BigTime Tommie 70 x 7, the coffee and citrus remained primary with the wood and pepper notes secondary. During this phase, the coffee notes increased in bitterness. While a coffee note in a cigar will always impart some bitterness, the bitterness slowly eroded at the balance of the overall flavor profile.

By the last third, the coffee and citrus remained grounded. There was not only bitterness from the coffee notes, but the citrus notes also had more sourness than sweetness. There was an increase in the pepper spice, but it still remained secondary. The wood notes were more distant. Unfortunately, the wood and pepper could not round out the flavor profile and restore the balance. This is the way the Asylum 13 BigTime Tommie 70 x 7 came to a close. The resulting nub was soft to the touch and slightly lukewarm in temperature.

While the Asylum 13 BigTime Tommie 70 x 7 was able to keep to a straight burn path, it needed frequent touch-ups. The burn line was rather jagged and did require these touch-ups to prevent the cigar’s burn from meandering. The resulting ash was slightly loose. This ash had a salt and pepper color. The cigar had an ideal burn rate with each sample averaging about 149 minutes smoking time. The burn temperature was ideal until the final puffs near the nub where it got lukewarm. 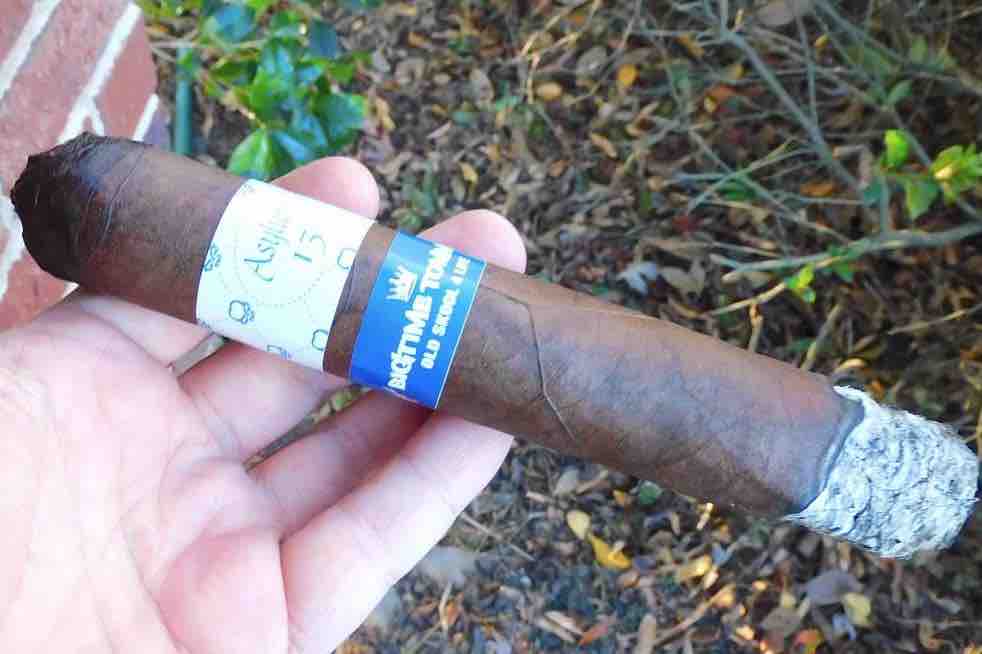 The draw of the Asylum 13 BigTime Tommie 70 x 7 performed excellently. It had just the right amount of resistance, and there were no problems drawing flavors from this cigar.  I find with 70+ ring gauge cigars, the draw needs to be quite precise between resistance and openness, and with each sample smoked, this was the case.

While this was a big and dark-colored cigar, this was not a cigar that was a powerhouse of intensity. The cigar started out medium in both strength and body and maintained that level from start to finish. Both the strength and body balanced each other nicely with neither attribute overshadowing the other.

The Asylum 13 BigTime Tommie 70 x 7 started out promising, but it went downhill by the midway point. While the first half was enjoyable, the bitterness and sourness from the cigar in the second half was too much to overcome. I don’t think the 70 ring gauge is the problem here, I just felt the blend was missing something. There also wasn’t much in the way of complexity with this cigar. At $12.00, I’d be inclined each and every time to pick up the classic Asylum 13 70 x 7 for a little over three dollars cheaper. In the end, this is a cigar I’d be inclined to try a sample first before smoking.