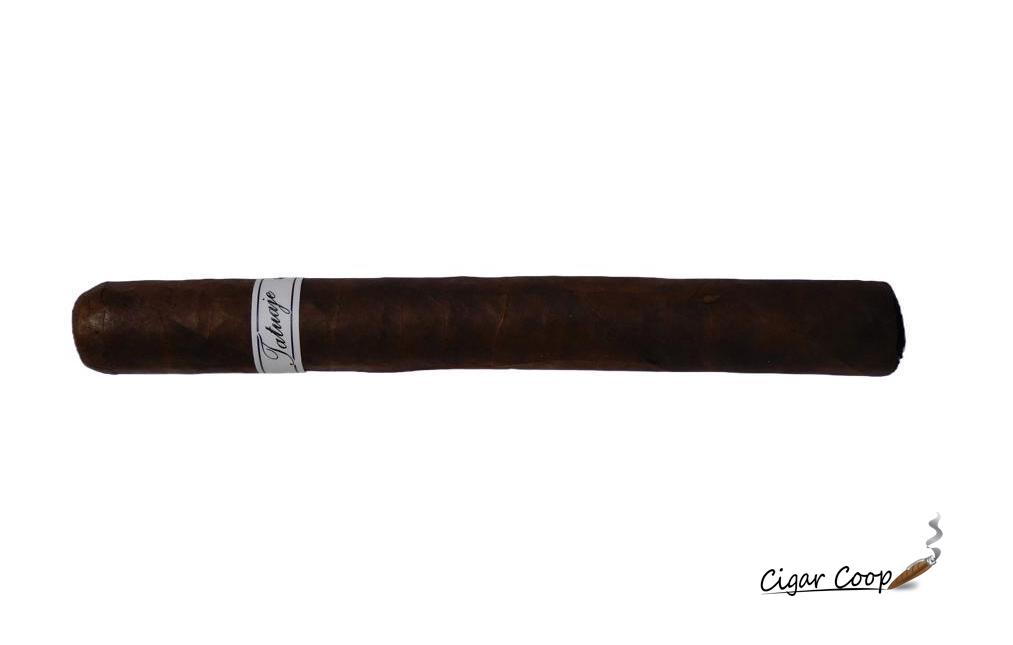 Since 2008, October is the month when Tatuaje has done an annual release of a part of its Monsters Series. The Monsters Series pays homage to horror movie characters in both classic and contemporary films. The limited edition series was launched in 2008 with the release of Tatuaje The Frank, a cigar that would pay homage to the character of Frankenstein. Ever since then, the Monsters has grown into a juggernaut as far as limited edition releases go. Going back to the early days of the Monsters Series, Tatuaje released a cigar paying homage to the actor who played Frankenstein – Boris Karloff. The cigar would be called the Tatuaje Boris, and at the time it appeared to be the first release of what would be another limited edition series known as The Actors Series. While the Monsters Series grew to nearly 70 releases since its inception, for unknown reasons the Actors Series for all practical purposes did not continue.  In fact, there hadn’t been a full-sized national release under the Actors Series since the Tautaje Boris until 2020 when the company would release a cigar known as Tatuaje Karloff.

As the name indicates, the Tatuaje Karloff also takes its name from actor Boris Karloff.  After 13 consecutive years of an October Monsters Release, 2020 would take a different twist. Instead of releasing a full-sized Monster, Johnson would release the Tatuaje Karloff. This is technically the third release under the umbrella of what could be considered the Actors Series. In between, there was originally a store-exclusive release to Corona Cigar Company called the Tatuaje Little Boris. The Little Boris would see two releases, one in 2012 and the other in 2018 with the latter also being sent to a small number of retailers nationwide.

Tatuaje Karloff was distributed differently than the Monsters releases prior to 2020. Instead of having dress boxes and non-dress boxes, there would be a single box design. There also would not be a concept of an Unlucky Thirteen (i.e. 13 retailers chosen to receive an allocation of the dress boxes). Karloff proved to sell out of retail stores quite rapidly. This led Pete Johnson to release a second batch of the Karloff to the TAA in 2021.

Below is a summary of the Actors Series releases:

As we will see, there are a number of similarities between the Tatuaje Boris and Tatuaje Karloff. At the same time, there are also some differences.

Without further ado, let’s break down the Tatuaje Karloff and see what this cigar brings to the table.

In terms of the blend, the Tatuaje Karloff utilizes an Ecuadorian Sumatra wrapper over Nicaraguan tobacco. If looking at the DNA of the blend, one may infer this is the same blend as the Tatuaje Boris. From what has been disclosed, the blends are not 100% identical. The Karloff blend has been tweaked and blended to the size of the Karloff. The cigars are produced at the My Father Cigars factory in Estelí, Nicaragua. 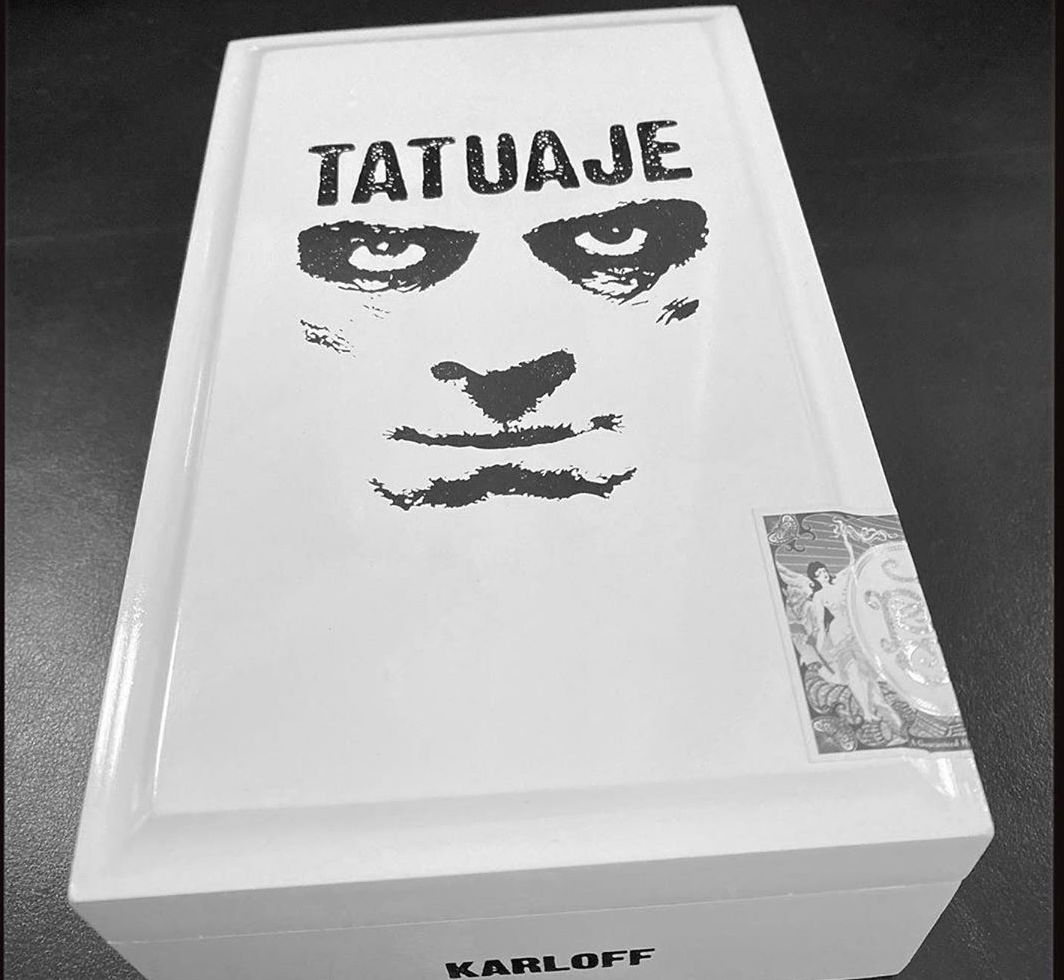 The band of the Tatuaje Karloff is interesting. It has a white background with the text “Tatuaje” in cursive font. What makes the band interesting is that it has fleur-de-lis design elements. This is something I have not seen in some time as in more recent years, it has been replaced by the Tatuaje tattoo logo.

A straight cut was used to remove the cap of the Tatuaje Karloff. Once the cap was removed, it was on to the pre-light draw experience. The cold draw delivered a mix of classic wood, natural tobacco, and cedar. This wasn’t the most exciting of pre-light draws. Since the pre-light draw is not factored into the numerical score and value rating, there is no loss of points here. At this point, it was time to toast up the footer of the Tatuaje Karloff and one on to the smoking phase.

The Tatuaje Karloff opened up with notes of natural tobacco, earth, cedar, and red pepper. Early on, the natural tobacco moved into the forefront with some inherent sweetness to it. The pepper, earth, and cedar notes settled into the background. Some additional creamy notes also surfaced in the background. Midway through the first third, the sweetness subsided on the natural tobacco. In addition, the earth notes took over as the primary note. Meanwhile, there was a second layer of red pepper present on the retro-hale.

During the second third of the Tatuaje Karloff, the earth notes remained primary. The creaminess subsided and there was an increase in the cedar notes. The cedar notes, along with some classic wood notes, eventually displaced the earth.

The final third saw the cedar and wood notes remain grounded as the primary notes. The pepper notes increased, but did not make it to the forefront. There still were notes of earth and natural tobacco present. By this point, the creaminess had dissipated. As the cigar experience of the Tatuaje Karloff came to a close, it finished with a nub that was soft to the touch and cool in temperature.

When it came to the burn of the Tatuaje Karloff, the burn line had a slight amount of waviness to it and there was some meandering on the burn path. As a result, the cigar required frequent touch-ups along the way. While the touch-ups remedied the burn, the number of touch-ups needed was too frequent. The resulting ash wasn’t overly firm. The ash had several shades of gray color to it. Meanwhile, the burn rate and burn temperature were both ideal. 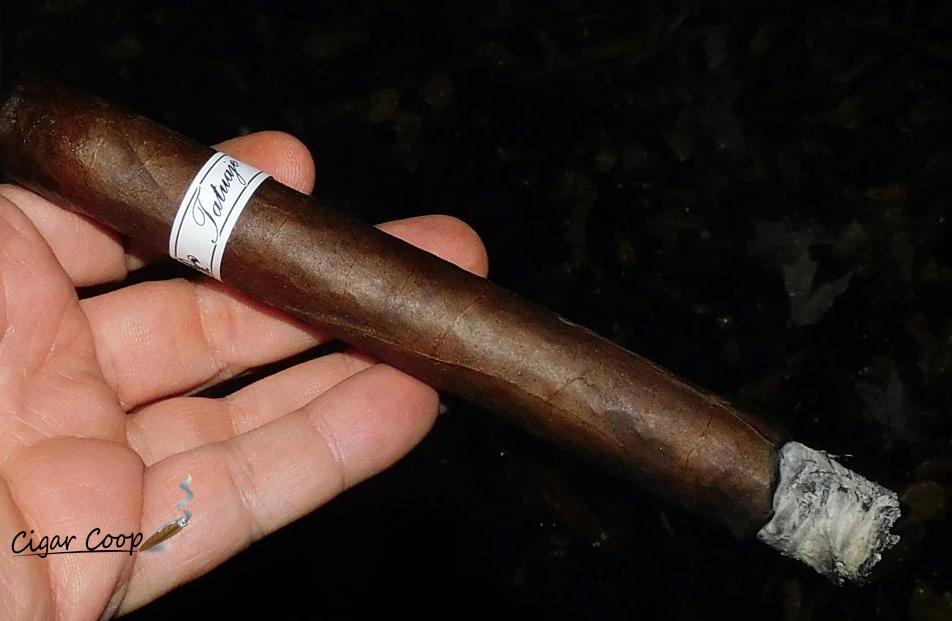 Burn of the Tatuaje Karloff

The draw to the Tatuaje Karloff performed superbly. This was a draw that had a touch of resistance to it – which is a positive in my book. At the same time, this was a low-maintenance cigar to derive flavor from.

In terms of strength, the Tatuaje Karloff pretty much came in at a medium. There was a slight increase in strength along the way, but in the end, the cigar maintained a strength level in the medium portion of the spectrum.

The flavors of the Tatuaje Karloff started out dialed back as they had mild to medium body. During the first third there was a rapid increase in the intensity of the Karloff. By the second third, the flavors were medium-bodied and in the second half, the Karloff was delivering medium to full-bodied flavors.

In terms of strength versus body, the strength had the edge early on. By the midway point, things had flipped and the body had the edge.

The Tatuaje Karloff was a difficult cigar to track down. It was released in 2020, and again in 2021. It wasn’t until mid-2022 that I spotted these cigars on the shelves of Corona Cigar Company in Orlando. I mention this because this most likely was a cigar that had quite a bit of age on it. This is notable because, while I was a fan of the Tatuaje Boris and Little Boris releases, I did not feel the Karloff came close to those releases. While I know it’s a “tweaked” blend, I would imagine the Karloff has some heritage to the Boris and Little Boris. In full transparency I had smoked both of those releases with less age on it, so I wonder if this impacted my smoking experience of the Karloff. Still, Cigar Coop doesn’t have a statute of limitations when reviewing the cigar. While the Karloff had its enjoyable moments, I never got the wow factor I got on the Boris and Little Boris. In the end, I’m inclined to say Try a Sample first – which isn’t that practical for a very hard-to-find cigar. As far as buying this cigar, this cigar may be at a point in its lifespan where it simply isn’t worth chasing down.