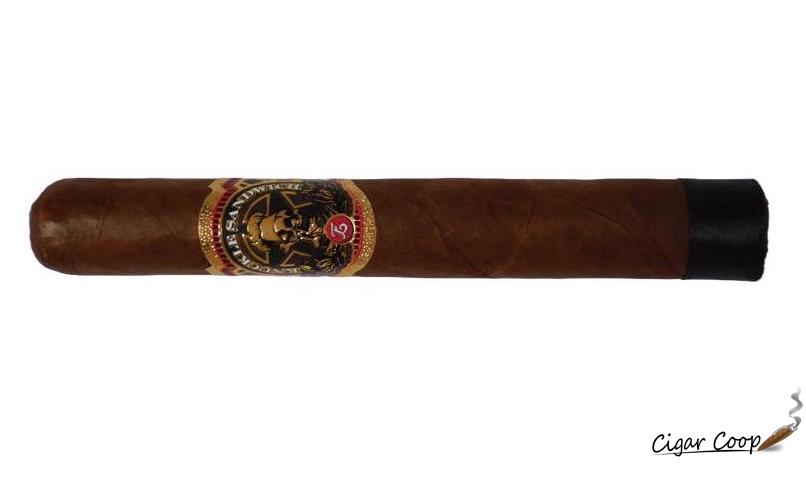 Celebrity-branded cigars are nothing new, but as 2022 opened up Espinosa Cigars would announce it was releasing a cigar done in conjunction with restauranteur, Guy Fieri. The announcement of Knuckle Sandwich would set off a lot of energy in the cigar business. While celebrities have branded cigars before, one can argue that Fieri has one of the biggest reaches of any celebrity to release a cigar to date. Over the years, company president Erik Espinosa had developed a friendship with Fieri, who is also a cigar enthusiast. When Fieri approached Espinosa about doing a cigar, Espinosa was initially hesitant but opted to do it with the understanding that Fieri himself would support the brand. For 18 months, Fieri worked with Espinosa and Hector Alfonso Sr. on sampling potential candidates for his cigar. In the end, the Knuckle Sandwich brand was born – and it would be launched in two blends – a Habano and a Maduro.  Today we take a closer look at the Habano blend in the Toro H size.

As mentioned Erik Espinosa had asked Fieri to get involved with supporting the brand once it was released. He was in attendance at the 2022 Premium Cigar Association (PCA) Trade Show, the Great Smoke 2022, La Zona Palooza 2022, and has visited many retail shops over the past few months. One could easily make the case that Fieri has provided some of the deepest celebrity support of any cigar brand. It seems to have paid off because there is momentum in the brand. This led to the addition of a limited edition offering under Knuckle Sandwich called Chef’s Special. There are also further plans to expand the brand.

The two blends of the Knuckle Sandwich bring together the best of two worlds from Espinosa Cigars. On one hand, the company is known for its use of Habano wrapper, so it’s no surprise that there is a Habano-wrapped Knuckle Sandwich. On the other hand, the Maduro uses a dark Sumatra wrapper, a wrapper that has seen more use out of Espinosa as of late.

For now, let’s turn our attention back to the Espinosa Knuckle Sandwich Habano Toro H and see what this cigar brings to the table.

In addition to a Habano wrapper from Ecuador, the Knuckle Sandwich Habano blend utilizes Nicaraguan tobaccos for the binder and filler. Production comes from AJ Fernandez’s San Lotano factory in Ocotal, Nicaragua – a factory that Espinosa uses for some of its production.

The Espinosa Knuckle Sandwich Habano is offered in three sizes. Each is presented in 20-count boxes. It is worth noting the three sizes of the Habano blend are also in the Maduro blend. The initials used on each vitola name represent people in Fieri’s life. 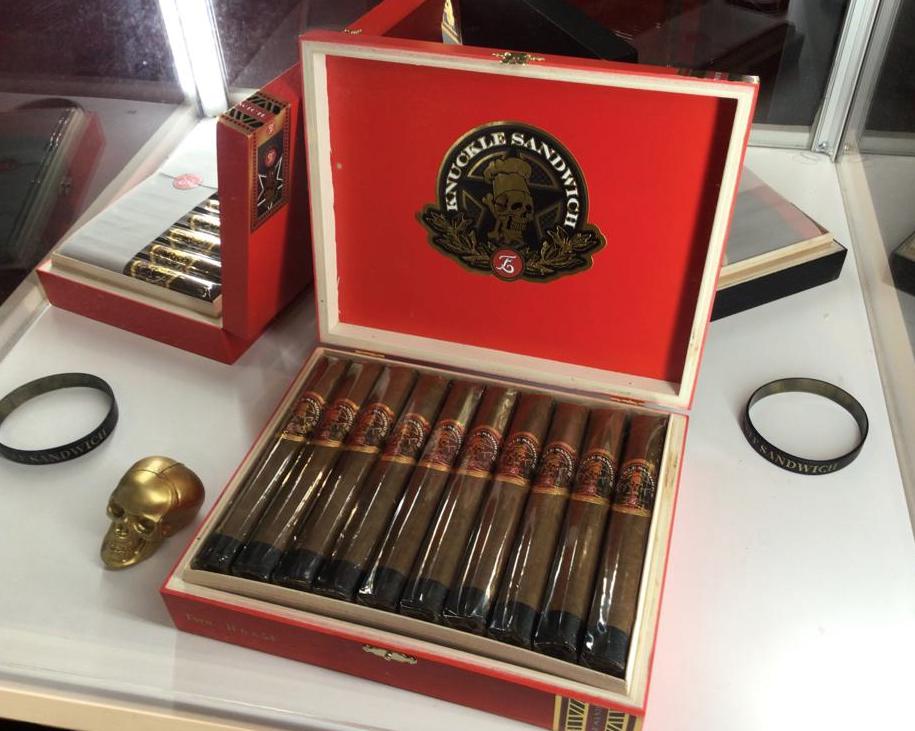 The Ecuadorian Habano wrapper of the Espinosa Knuckle Sandwich Habano Toro H had medium brown color with a slight rosado tint. There was some oil on the surface of the wrapper. Upon closer examination, there was a slight amount of mottling on the wrapper. There were some veins and some visible wrapper seams.

The band of the Espinosa Knuckle Sandwich Habano had a black, red, gold, and white color scheme. On the center of the band is a gold-colored skull with a chef’s hat sitting on a black background with some gold adornments. Above the skull is the text “KNUCKLE SANDWICH” in white font arranged in a curved fashion. Below the skull is a red and white Espinosa insignia logo. To the left and right of the skull is the text “ESPINOSA” in white font sitting on a red background. The far right of the band has a larger red and white Espinosa insignia logo that acts as a band fastener. There are various red, black, and gold design elements. Finally, the upper and lower portions of the band have almost a gold-powder effect to them. The footer is finished with a black colored ribbon.

A straight cut was used to remove the cap of the Espinosa Knuckle Sandwich Habano Toro H. Once the cap was removed it was on to the pre-light draw. The cold draw delivered a mix of earth, wood, and natural tobacco. Overall this wasn’t the most exciting pre-light draw. Since the pre-light draw is not factored into the numerical score or value rating, there was no loss of points here. It was now time to remove the ribbon on the Espinosa Knuckle Sandwich Habano Toro H, light up the cigar, and see what the smoking experience would deliver.

The Espinosa Knuckle Sandwich Habano Toro H opened up with a wide variety of notes including earth, cedar, natural tobacco, herbs, citrus, and nut. As the cigar experience moved through the first third, the natural tobacco and herbal notes moved into the forefront. Meanwhile, the citrus, cedar, earth, and nut flavors settled in the background. There was an additional layer of red pepper on the retro-hale.

During the second third of the Espinosa Knuckle Sandwich Habano Toro H, some red pepper remained on the retro-hale but emerged on the tongue. The pepper joined the citrus, cedar, earth, and nut flavors. Meanwhile, the herbal and natural tobacco notes remained in the forefront. The later part of the second third saw the pepper and cedar increase in intensity.

The final third saw the natural tobacco and herbal notes remain primary. The cedar and pepper notes were both the most prominent secondary notes. There was some muddling of the flavors during this stage. In the more distant background were the citrus, earth, and nut flavors. This is the way the Espinosa Knuckle Sandwich Habano Toro H smoking experience closed. The resulting nub was soft to the touch and cool in temperature.

On each of the samples of the Espinosa Knuckle Sandwich Habano Toro H, the burn path and burn line started out straight. As the cigar moved into the second third, the burn required more in the way of touch-ups to maintain a straight path and line. While the touch-ups did the trick, there were more touch-ups needed than required. The resulting ash was mostly white with some dark streaks in it. This was an ash that was firm in composition. Meanwhile, the burn rate and burn temperature maintained ideal levels. 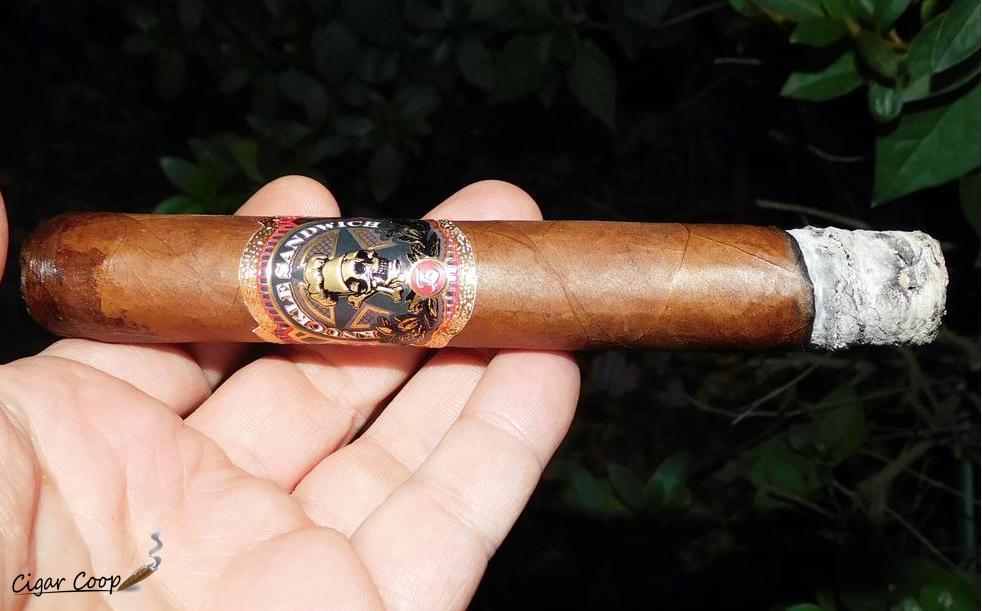 The draw to the Espinosa Knuckle Sandwich Habano Toro H had a touch of resistance to it – making it an ideal draw. At the same time, this cigar produced an ample amount of smoke. This surprised me as this wasn’t much of an open draw.

The Espinosa Knuckle Sandwich Habano Toro H started out with medium strength and medium body. Both the strength and body increased throughout the first half. By the second half, the body progressed into medium to full territory while the strength remained medium. In terms of strength versus body, the body maintained a slight edge.

If there is one thing I’ve been critical of with Espinosa Cigars, it has been the fact they have way too many Habano wrapper releases. At the same time, I do think Espinosa has done a good job at creating unique flavor profiles so these Habano releases don’t compete with each other. Perhaps the Espinosa Knuckle Sandwich Habano Toro H stands alone as the most unique of those flavor profiles. The problem is that I don’t think it is the best of those flavor profiles. Coming in at 88 points, it’s a good cigar but not on the level of some of the company’s other releases. Given the $13.50 price point, it’s one I would recommend trying a sample of first. At the same time, the blend is still intriguing enough for me to explore it with further aging and/or different sizes.