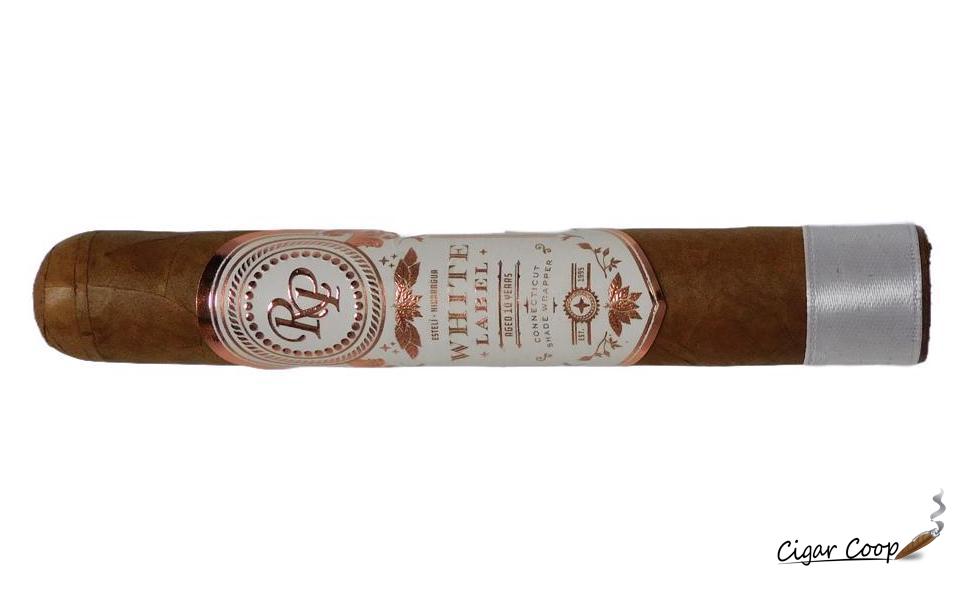 In terms of Connecticut Shade offerings, the Rocky Patel White Label is not the first one by the company. There are several other ones currently offered in the company’s portfolio which are targeted more as everyday premium and everyday value-priced cigars.

The remainder of the blend includes Nicaraguan and Honduran tobaccos.

Currently, the Rocky Patel White Label is offered in four sizes. Each is presented in 20-count boxes. 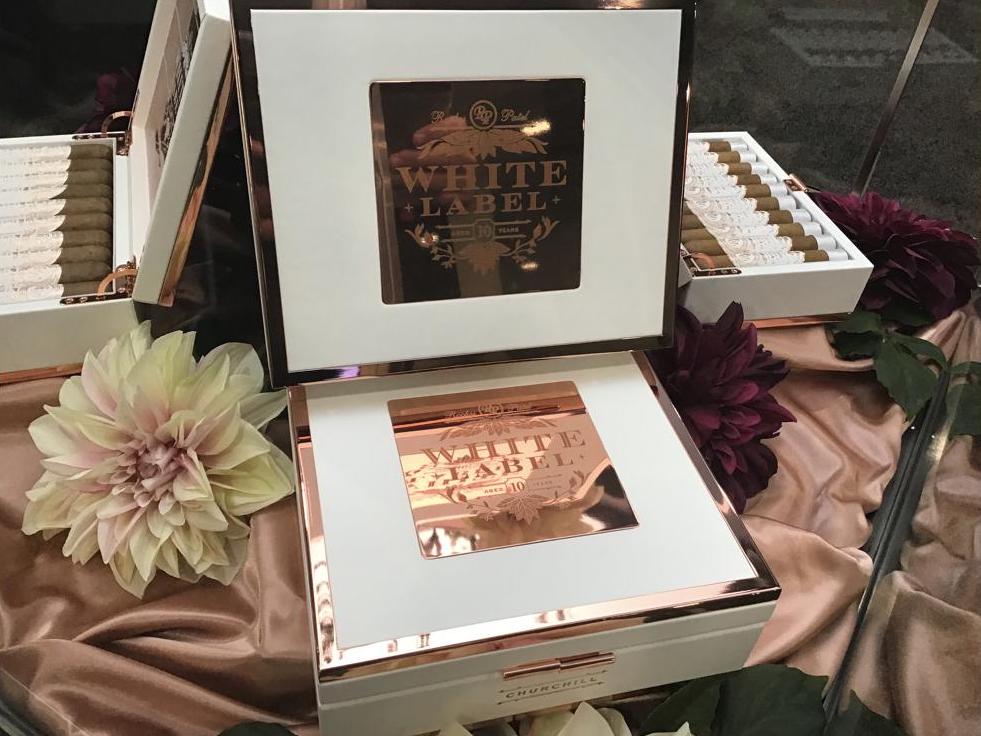 There was also a limited edition 6 1/2 x 55 figurado that was made exclusively available as a part of a special Rocky Patel White Label humidor set.

The band of the Rocky Patel White Label is – well, a white label. On the Robusto, this band covers a lion’s share of the area of the band. All of the fonts on the band have a copper color to them. Starting from the upper portion of the band and going down, these are the following highlights:

The band features many copper-colored design elements. The footer is surrounded by a white footer band.

Prior to lighting up the Rocky Patel White Label Robusto, a straight cut was used to remove the cap. Once the cap was removed, it was on to the pre-light draw ritual. The cold draw was quintessential Connecticut Shade flavors – namely cream, wood, and cedar. Overall this wasn’t the most exciting of pre-light draws. Since the pre-light draw experience is not factored into the numeric score or value rating, there was no loss of points here. At this point, it was time to light up the Rocky Patel White Label Robusto and see what the smoking experience would deliver.

The Rocky Patel White Label Robusto opened up with notes of cream, wood, cedar, and a slight citrus component. There was no dominant note between the cream, wood, and cedar, but as the cigar burned through the first third, the creamy component moved to the forefront. The wood, cedar, and citrus were the secondary notes. Meanwhile, the retro-hale was delivering some black pepper.

During the second third of the Rocky Patel White Label Robusto, the cedar notes intensified and displaced the cream as the primary note. The cream settled in the background with the wood and citrus notes. In addition, some black pepper notes were now present on the tongue.

The cedar notes remained in the forefront during the final third. There was an increase in the pepper notes, but they still remained in a secondary role. The wood, citrus, and some cream notes rounded out the flavor profile. As the Rocky Patel White Label Robusto came to a close, the cigar’s nub was soft to the touch and cool in temperature.

The burn of the Rocky Patel White Label Robusto started out with a straight-line and straight burn path. On each of the samples, the burn path had some slight meandering and jaggedness on the burn line from the second third on. This required additional and frequent touch-ups. While the touch-ups did the trick, there were more of them than I preferred. The resulting ash was firm with a very light gray color. As for the burn rate and burn temperature, both were ideal. 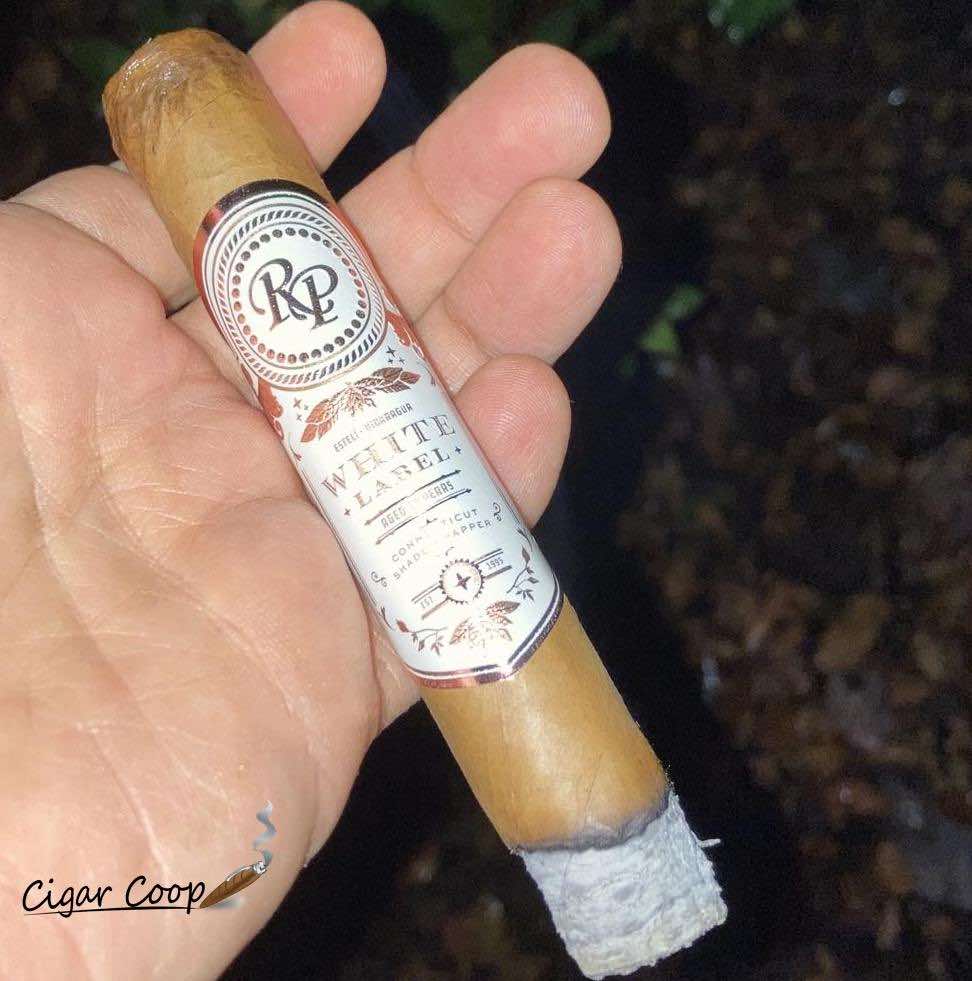 The draw to the Rocky Patel White Label Robusto performed quite well. It had a touch of resistance to it – which is something I consider a positive. At the same time, this was a low maintenance cigar to derive flavor from.

For the most part, the Rocky Patel White Label Robusto delivered a medium-strength, medium-bodied smoke from start to finish. This cigar definitely had more boldness than a traditional Connecticut Shade cigar, but a the same time this was a very approachable cigar. As the cigar experience progressed, there was a slight increase in the intensity levels of the strength and body. In the end, the White Label Robusto remained in the medium area of the spectrum.

The Rocky Patel White Label Robusto has a relatively straightforward flavor profile. It’s going to deliver quintessential flavor notes for a Connecticut Shade – namely cream, cedar, wood, and citrus. The flavors aren’t bad flavors, but they also lacked wow power. I would put this cigar in the “like it” but not “love it” category. In the end, it does enough to get a respectable 87-point score, but not enough to approach the Cigar Coop Standard of Excellence. At $19.00, this does carry a steep price point. The cigar delivers enough that I still would encourage others to try a sample. As for myself, I am still curious to smoke some of the other sizes of this blend.

« Cigar Review: Tatuaje Karloff » The Blog: A Change Will Do You Good