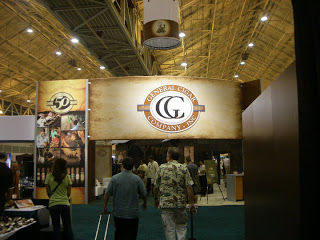 In the previous installments of Tales from the IPCPR, we have discussed a lot of family cigar companies and several indie cigar companies.  Like in any industry sector, there are the big boys – a.k.a. the big corporations.  A lot of times, the big corporations take a hit for being – say “too corporate”.   But this year, if I had to rate what cigar company had the best IPCPR in terms of what they are doing with product pipeline; hands down I would give it to General Cigars.  These guys had nothing short of a home run at IPCPR!  One of the key areas of focus at IPCPR 2010 for General – build up two of their already flagship brands: Macanudo and La Gloria Cubana.

First up, I felt excitement walking into the General Cigar lounge.   Inside the lounge feel was to give this more of a “classic” cigar feel to it with some elements of contemporary.   As you walked in, you would see some aging tobacco leaves.   There was also a roller making La Gloria Cubanas.   In addition, there were some of the modern perks that a big corporation can offer such as “Club Macanudo” where visitors could get free coffee and donut holes.   There were plenty of showcases to highlight lots of cigar art.

On top of the wonderful setup at the General Cigar lounge, there was a lot of excitement about the new sticks being showcased.  This wasn’t a “let’s put out a new stick”.   This was a conscious effort to examine two of the brands that have been very successful for General Cigars and look at how to expand on them.  Overall, I was only pleased with what General Cigars is doing,  but completely pumped!

Macanudo is one of those names that is pretty synonymous with the cigar industry.  For those familiar with Macanudo, they are also known for making milder cigars.  In 2008, the Macanudo 1968 was added to the brand.   While this is a very good cigar, the higher price point (over $10.00 in most cases) has been the one question mark.

This year, Macanudo has two key additions to the brand that debuted at IPCPR:

Earlier in the year, the “Artesanos de Tabaqueros” cigar was launched.  This cigar is a Cigar of the Year candidate in my book.  This is a unique cigar that has a Connecticut Shade lower third by the foot and hearty Ecuadoran Sumatra on the upper 2/3.  This makes for two unique tastes in one stick – and an unbelievable “transition”.

There were two significant additions at IPCPR to even further expand the La Gloria brand.  Packaging will also play a key role here.

Without a doubt, this was a huge year for General.   There was clear excitement evident at IPCPR coming from some of the good people who work there such as Rick Rodriguez (Rick proudly took us through the La Gloria brand while we were at the show and did a great job).   I sincerely look forward to following up with everyone on the reviews of these sticks.