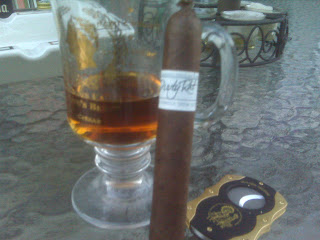 Since I’ve gotten a lot of new sticks at IPCPR that still might require aging or are still in prototypes, I’ve opted to introduce a concept called the “Pre-Review”.  I know that isn’t exactly good grammar, but this will allow me to post some initial impressions of cigars that fall into those categories I mention.   My first cigar I will put into this category is one of the most highly anticipated sticks of the 2010, the Liga Privada Dirty Rat.   The Dirty Rat falls into the category – “might require more aging”.   This doesn’t mean its a bad cigar, but it more or less means that my review might change over time as the cigar ages.  I compare  cigars to listening to records.  Like a song, sometimes the cigar might take a while to grow on you or sometimes the cigar might eventually wear thin on you.  Therefore, the Pre-Review allows me to take these things into consideration as time progresses.

The best way to start this is to quote Drew Estates’ President Steve Saka in the press release, “At this point, we have made 200 or more Liga Privada blends. There are probably 9 or 10 of them so far that are exceptional, however their blends differ from both the No. 9 and the T52 branded cigars. They’re cigars that work as a particular size, such as a lancero or corona, with the blend being unique to that particular vitola. The ‘Dirty Rat’ is a great example of this, so we have decided to introduce this as the first cigar in the Ünico line.”

When I sat across from dinner with Steve Saka during IPCPR, I did mention I wanted to keep most of the conversation off of Cigar Coop because I felt Saka was talking candidly and over the record.  However, I can tell you from that conversation that Steve Saka was genuinely excited about this stick.  He definitely is a fan of a cigar of this particular size.   Now normally, I am a 6 x 60 Magnum fan, so a stick of this size does not fit my profile.   But given that the Liga Privada T52 was my 2009 Cigar of the Year and there are some parallels (namely the Stalk-Cut American Habano) , I felt this was a cigar to definitely look at.

Here is some information on the tobaccos: 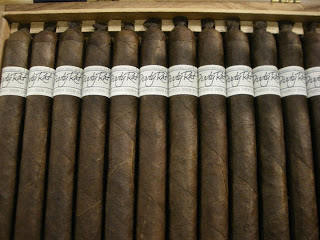 The cigar holds to all of the true Liga Privada standards – namely the flawless construction.  This construction remained from pre-light to nub.   For the smoke, I pulled off the pig-tail cap and fired it up.

I initially had a slightly uneven burn with the stick.  I’m willing to chalk this up to a poor initial light-up by myself.   I made a quick adjustment and from that point on, it was nothing but perfect burn and perfect ash.

This was advertised as a full-bodied full strength cigar.   I expected this to hit me hard on the initial draws, but this was not the case.   I’ve had similar experiences to the T52 on the initial light, so that didn’t bother me.  The initial taste was a combination of salt (typical with much Esteli Nicaraguan tobaccos) with some light cedary sweet overtones.   This cigar also generated a lot of smoke – and that trait was present for the whole smoke.   I’ve read some mentions of peppery spice, but just didn’t pick it up.  I was a little concerned in the first 25 percent of the stick that this would be somewhat of a disappointment from a flavor and complexity profile.   However things soon picked up.

Notes of baker’s chocolate soon would emerge around the 25 to 30 percent point of the burn.   That was soon joined by some wood overtones.   Now I was beginning to see some complexity.  I was also beginning to see some strength.   A little past the 1/3 point, there were now hints of sweetness.  These weren’t cedary, but more on the licorice end.   It was official – the complexity I have come to known and love with the Liga Privada line was alive and well..   As I got into the second half of the cigar, the licorice flavors were soon replaced by a more nutty type of flavor.   By this point this cigar was now in full kick – lots of strength on this one.  No doubt this was as advertised.

The finish to the cigar was strong.   This was not a warm finish, but burned cool right to the nub.  And when I say nub, I mean nub.  Check out this one – and not one bit of harshness to it.

So how do I assess this.   Still hard to tell.  The first 30 percent of the smoke is the one part where I want to say – the jury is out.  Namely, I would have liked more flavors and more kick to the early part of this smoke.  I’m willing to some extent to chalk this up for green-ness.

But I do think the potential is there.   Not sure where this stick will end up on my final tally of the 2010 Cigar of the Year.  I’m inclined right now to say, this stick will make my list, but probably not be the overall Cigar of the Year.   I can also say that this stick was good enough to make me light up a Corona over my normal Magnum size.   This one is definitely a cigar I will check out again.  My word of advice would be to these cigar sit for a while though.  Overall, this is another fine entry to the Liga Privada line.

« A Video Message from Cigar Coop on Largo, Florida » Cigar 102: To Cello or not to Cello