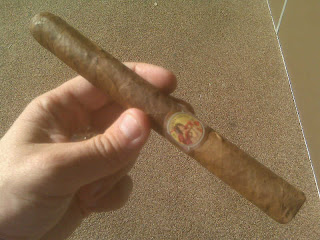 2010 seems to be the year of the “segmented wrapper” cigar – namely using two different wrappers on the cigar in a segmented (as opposed to pinstriped fashion)  The Artesanos de Tabaqueros (I’ll call this the ADT) along with Joya de Nicaragua’s Cabinetta Serie are two significant releases for 2010 that fall into this category.  The ADT was released prior to IPCPR 2010, but no doubt it still made a splash.

Let’s take a closer look at the sizes ADT:

The construction of the ADT is as follows:

There isn’t a lot known about the binder and fillers, but Dominican and Honduran is what I have been able to infer..   In a year where Nicaraguan tobaccos really have been the rage, this was a nice change to see the Honduran tobaccos in the spotlight.

For this review, I opted to go with the 7 x 50 ADT – a stick I have opted to go many times before.   I carefully punched a hole in the cap, toasted the foot and was prepared to enjoy this stick.

Since the Connecticut Shade was on the foot, it was no surprise that there were mild, cream tones to start the stick.   It didn’t take long for some nice pepper spice to emerge.  The pepper tones will not knock you out.  At about the 1/3 point, a cinnamon sweetness emerged.  This didn’t replace the pepper tones, but complimented them nicely.

It is shortly after the 1/3 point where one of  the best things to happen to a cigar happens.  Right before the burn transitions from the Connecticut Shade to Ecuadorian Sumatra, there is an increase in the strength of this cigar from mild to medium/full.  It’s not gradual – it happens very quickly.   Once the transition happens, you will know it.  The nice thing is the flavor profile of the cigar stays pretty consistent during this transition in strength.

The strength continues to increase and begins to gravitate toward a full in the second half of the cigar.  Around the 60 percent point, the cinnamon tones are more or less replaced by coffee tones.  The cream and pepper flavors remain, but at this point this is the flavor profile that would be brought home.  The finish was nice and cool and I was able to get a good nub, but the nub was a little soft.

A lot of people may think I’m crazy, but from a strength profile, this will take you across the full spectrum – namely from mild to full, but the majority of this smoke will be in the medium-full range.   From a body standpoint, the tobaccos did have rich flavors – and it also gives you a good chunk of the spectrum.  I think this starts out as a mild-medium, it progresses to medium right before the transition, medium to full after the transition, and finally a full.

The burn and draw are flawless.  I’ve had this stick several times and each time there have been no issues – in fact, I’ve never had to touch this up.

In my review of the Joya de Nicaragua Serie Cabinetta, I put the following comment when comparing that stick to the ADT.

This (Serie Cabinetta) is an interesting contrast to the Artesanos de Tabaqueros in that this cigar is mostly mild for the duration while the Artensanos is much fuller for the duration of the smoke.  As someone who prefers a more full profile, the Artesanos probably would be the stick I would reach for first…

This stick simply rocked.   It is without a doubt, one of the best sticks ever by La Gloria Cubana – and definitely a candidate in my book for Cigar of the Year.   I’d recommend this stick to anyone from the newbie to the seasoned cigar enthusiast.