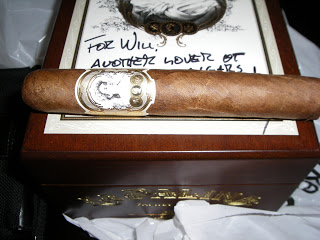 One of the revelations of the 2010 cigar year has been Bill Paley’s La Palina line.   When I first tried the La Palina Alison at the Commonwealth Cigar Club in Roanoke Virginia, I was blown away.   My words were: “The race for Cigar of the Year just got that much tighter.”   Well I now I have had a chance to sample another cigar in the line – the La Palina Babe.  As a result, yet another monkey-wrench has been thrown into what has to be the most competitive race for Cigar of the Year in years.   Yes, the Babe, like the Alison cigar is a true winner.

In my previous review of the La Palina Alison, one thing I talked about was the amazing story of how Bill Paley resurrected his grandfather Samuel Paley’s brand.    The La Palina Cigar web-site has a detailed write-up of that story.   To blend this stick, Paley goes to one of the best makers of cigars – the Bahamas-based Greycliff Cigar.

The La Palina line consists of two main brands – the Family Line and the Limited Edition.  I’m going to outline all here and then post some of the differences (Again, the web-site has a more descriptions).  One thing that I love is how Bill Paley paid tribute by using his family heritage to name the cigars in the Family Line and incorporated the 1896 year (the year Paley’s father Samuel opened his first cigar shop) into his Limited Edition .

Sizes:  Each size is named after a member of the Paley family.  Depending on the size of the La Palina Family line is what the wrapper is dependant on.   So here are the sizes and the associated wrappers:

The wrappers give the cigars a different body.  The Ecuadorian wrapper sticks are much more on the medium body range, while the Costa Rican wrappers are on the mild to medium body.  When I smoked the La Palina Alison, I simply found one of the most unique cigars that has been produced in 2010.   While I was anxious to try the Costa Rican wrapper Babe, I was a little concerned that the stick might be too mild for my pallet.   This proved not to be a factor as the cigar provided to be very smooth with great flavor.  The stick also proved not to be too mild at all.

I punched a whole into the beautiful cap of this cigar and once I lit the foot, I was ready to go.   One thing that I really loved about the Alison was the unique notes of herbs, blackberry and cream (not I don’t feel I was losing my mind picking up these notes).   I was pleasantly surprised to find the Babe was producing similar notes much earlier than I did with the Alison.   There were also hints of cedar, wood, and nut in the early part of the smoke (again, another similar to the Alison).  All of these notes are not going to be overpowering – resulting in one of the smoothest smokes I have had in some time.

The wood notes begin to diminish in the second half of the smoke.   The berry and cream notes remain consistent right until the end of this smoke.  The cedar spice does pick up in the second half and there are also some notes of pepper present.  The finish to the smoke was a bit softer and warmer than I would have liked, but I was able to get a very good nub as this stick maintained its terrific sweetness right to the end.

A note on the blackberry and herbal tones:  you might think this tasted like an infused cigar – but it didn’t.  It had a wonderful natural feel to it throughout the smoke.  Again another similarity to the Alison.

The burn on this cigar was very good, only requiring an occasional touch-up.  The draw was flawless on this stick.   As for the strength, yes this definitely was a notch below the medium-strength Alison, however I felt the body of this cigar still remained in the medium range.   The end result was actually an incredibly smooth cigar.   This is not just a morning cigar, but one that can be enjoyed throughout the day.

The La Palina sticks are going to cost more than many cigars on the market, but you cannot put a price on quality.   You are looking at about $20.00 (give or take a few bucks) for any stick in the line.  Like with the Alison, I mentioned seasoned cigar smokers might feel this is a high priced point for something that isn’t in the full-bodied range.  However, the unique flavors and overall enjoyment experience more justify the price.  The Babe, like the Alison will earn a spot in my Cigar of the Year running. It is definitely worth checking out.