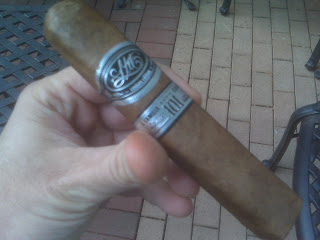 One of the biggest buzzes of the 2009 IPCPR was the debut of celebrity jeweler Matt Booth’s line of Room 101 Cigars.  Many people (including myself) were excited about Booth joining the ranks of cigar-ebrities.   When the Room 101 was released, I was disappointed at first as I was hoping for a stronger cigar with some more complexity.  This is not to say the Room 101 was a poor quality stick, but it was simply due to the fact that I wanted more from this stick.   After meeting Booth at the 2010 IPCPR, I really got a great appreciation for what a great guy Booth is.  Going into 2010 IPCPR, I was excited to know that Booth was ready to release his second blend int he Room 101 line.   This stick is expected to be the first in a series of limited edition cigars.   This stick is called “Room 101 LTD Conjura” (Conjura means Conspiracy in Spanish). I’m pleased to report this stick moved in the direction I was hoping Room 101 to move in.

Like the core Room 101, the Conjura is also distributed by Camacho Cigars.  Let’s take a closer look at this stick.  First the construction.  I always get excited when there are tobaccos from the “trifecta” of cigar producers – Dominican Republic, Honduras, and Nicaragua (Nicaraguan tobacco was not in the core Room 101 cigar line)

The cigar is shaped in a box-press and is accented by that beautiful Rosado wrapper.  Here are the four sizes:

I’ve smoked this stick a few times and have had similar experiences, but I’ll discuss my experiences for the stick I sampled for this review.  On the initial draw, this cigar was awesome.  The initial draws of of coffee, cream, earth, wood, and some mild salt tones – a  great complexity to start (something that wasn’t present with the core line).   I admit I was all over the place with the notes of flavor I was taking in.  The coffee notes seemed to be the strongest and I really liked this. The salt tones soon progress into a mild spice – a combination of cedar, cinnamon, and pepper tones.   This spice is not too strong as this stick hits the 1/3 point of the smoke.

Around the 1/3 point, the flavor notes begin to change.  The coffee notes that were so strong at the beginning begin to diminish.   The flavors of wood, earth, and the mild spices seem to take center stage as you get into the heart of the smoke.   The spice notes that began to emerge in the first third continue to emerge, but they don’t overpower. The cinnamon notes are pretty much gone at this point – and its more of the cedar/mild pepper notes that will make up this spice.   Toward the final part of the smoke, the spice notes are the ones that seem to be the primary ones.  Again, the spice is not a “blast” and does not overpower.   The earth and wood notes are still there, and even the coffee notes still re-emerge.   Overall, I really liked the complexity of this stick – I just wish the initial coffee notes that I got at the beginning would have stayed with this stick throughout as the wood, earth, and spice just didn’t do enough for me.    The finish to the stick is cool, but a little soft.

The draw was excellent on this cigar as I had no issues with this.   Each time I had this stick, the burn did require some touch-ups – i.e., it could have been a little better.