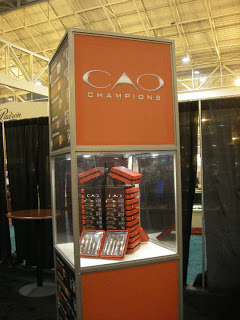 In a move that was not unexpected,  Gary Hyams formerly Chairman of CAO Cigars is leaving General Cigars.   This move comes just a little over four years he was named to this position.

With the departures of President Tim Ozgener and Lifestyle Marketing Director, Jon Huber over the past three months, this has was not unexpected.  I’m sure the CAO brand is undergoing the transfer of trade process into the General Cigars family.   As a part of this process, consolidations, relocations, and re-organizations are normal activities.  In his role as a part of the acquisition by General, Hyams was involved in many of the transfer activities.

While I know a lot of people are upset about the changes at CAO, I still have a lot of faith in what General Cigars is doing.  Acquisitions and mergers are a natural part of a capitalistic society.   Change is inevitable.    We need to see how the chips fall.

No doubt – things will be different with CAO – and no doubt, there are three big free agents on the cigar job market.

Here are the details of the press release:

Gary Hyams commented, “Being at the helm of CAO for the past four years has meant a lot to me and I am proud of what my colleagues and I have accomplished. I have great faith in Dan Carr and his team, and I leave CAO fully confident that they will continue to enhance and grow the brand.”

Dan Carr, president of General Cigar said, “Gary is a strong leader who is responsible for bringing international prominence to CAO. I am grateful to him for his dedication to the company and to all that he contributed toward the integration of General Cigar and CAO into the new Scandinavian Tobacco Group. Gary has done an exceptional job of preparing my staff and me for the future and we remain committed to continuing the momentum that he and his colleagues have built with CAO.”

In 2007, Hyams was highly instrumental in the acquisition of CAO International and was appointed Chairman. Under his leadership, CAO has grown to become a highly successful company in the competitive premium cigar category. He retained the culture of the company and implemented many successful new brand launches including America®, Lx2® and La Traviata®, which has received the highest acclaim of all CAO brands to date. Mr. Hyams was also heavily involved in the 2009 acquisition of the Torano and Olivas cigar factories in Nicaragua and Honduras.

Mr. Hyams has been an advocate for the cigar industry, having been appointed to the Board of Directors of the Cigar Association of America (CAA) and having served as Chairman of the Imported Tobacco Products Advisory Council (ITPAC) in the U.K.

His distinguished career in the industry began in the U.K. at “Loretta Cigars London LTD,” which Mr. Hyams later came to co-own. Loretta Cigars was noted for building the Henri Wintermans, King Edward and Ritmeester brands, and was also an agent for Macanudo®, Don Tomas®, CAO and the cigarette brand “Natural American Spirit.”