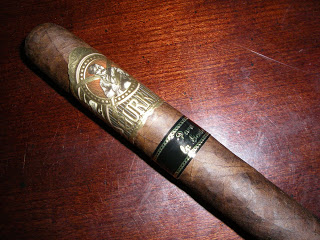 At the end of 2010, there were three cigar manufacturers that decided to release “New York only” cigars.    In other words, these would be cigars that would be sold exclusively to retailers in New York State.   The idea was that the New York State cigar would provide a much needed jolt to retailers in New York because they are losing customers out of state due to the insane tobacco taxes.  The three cigar companies that have stepped up are Alec Bradley, La Aurora (Miami Cigars), and Gurkha.  A few days ago I explored the La Aurora release.  Today I take a look at the Gurkha release – the Para La Gente (meaning “For the People”).

Of the New York only releases, the Gurkha one seems to have gotten the least fanfare/attention.  However, I do have to give Gurkha some credit.   They priced their cigar the most reasonable.   While Alec Bradley and La Aurora have SRPs above $10.00 (that includes the insane New York State tax), the Gurkha release has been priced in the $6.00-$8.00 range depending on the retailer.    This was a very smart move because the lower price point does provide more incentive to a consumer in New York state to give Gurkha full consideration.

Right out of the gate, the blend of the Gurkha Para La Gente excited me.  From its striking Brazilian wrapper to the fact it contains Dominican Ligero.

I selected the Toro for this smoke. For this cigar experience, I opted for my stand-by straight cut into the cap.   It was then on to the pre-light ritual which has recently become a regular part of my cigar experience.   The dry draws gave me mostly wood and oak – nothing terribly exciting.   It was then on to lighting this one up and seeing what it brought to the table.

On the initial draws, there was definitely a salty flavor to start.   A lot of times, the early salt notes dissipate within 10 seconds for me.  This one lasted over a minute and was a little more pronounced.  This reminded me of Olor tobacco.   Anyway, the salt did eventually dissipate and gave way to notes of chocolate and cocoa powder.  Around 10 percent into the smoke, there were some slight hints of espresso syrup, but nothing very pronounced from an “espresso” standpoint.   I also detected a combination of cherry sweetness and some cream.   At the same time, the salty flavors transitioned nicely to a smooth, but pronounced cedar spice.

By the second third of the Para La Gente, the cherry sweetness and cedar spice did come to the forefront, but it then began to trade places several times with the chocolate notes as to which is the main flavor note.  I found this a very interesting pattern – and it made for some interesting complexity.  Eventually by the second half of the smoking experience, the cherry and cedar spice did push out the chocolate/cocoa notes.

For the cigar experience, I particularly enjoyed the first two thirds of this cigar.  FI know many cigar enthusiasts find this enough, but for me – I really like to take my cigar down to the nub.   For the Para La Gente, the last third was not completely satsifying. Much of the spice had faded and the taste profile got more woody.  Each time I had this cigar, the finish was harsh.   My nub I got was soft and warm (thus the reason for the harsh flavors).

While I did not get a great nub, the burn rate and burn temperature were not bad on this cigar, so I cannot knock it for that.  The burn did require several touch-ups to keep it straight though.   There were no real major issues on the draw – in fact, it stood up with the best draws on cigars.

From a strength standpoint, I think this cigar gives enough nicotine to qualify for the medium to full range.  It has a little more pop than you might think and I’m sure the ligero in the filler plays a role.   From a body standpoint, this is definitely a full-bodied smoke.  The flavor notes are rich and pronounced – even the woody notes in the last third.

The debate on whether or not the last third of a cigar is worth smoking can be a religious one and go on forever.   In my book, it does take the cigar down a few notches when a cigar does not finish well.  However, in the end – there is still enough complexity and flavor early on to make this cigar worthwhile.  Plus, Gurkha deserves credit for being aggressive on their pricing.    I probably will smoke a few more of these to see if the last third gets any better.  For now, this is still a Nice to Smoke.

Disclaimer:  The cigar experience described in this assessment was purchased at Cigar Vault in Staten Island, New York.