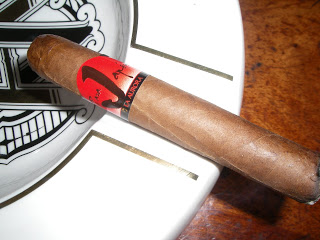 One point I’ve made before, when it comes to giveback or stepping up in a time of need, the cigar industry consistently is up in the forefront.    In 2011,  following the Earthquake and Tsunami disasters, La Aurora Cigars has stepped up and released a cigar that will have portion of proceeds from sales of the cigar donated to the Japan Earthquake and Tsunami Relief fund.   The idea stemmed after La Aurora met with a group of cigar reviewers where one of them, Mario Takeyama suggested a cigar be done to help the victims. The cigar is called Para Japon meaning “For Japan”.   The amazing thing is how swiftly La Aurora acted on this.  La Aurora made the announcement at the end of March and by the second half of May the cigar was shipped.   The intent of this project cannot be questioned as it demonstrates in action how the cigar industry steps up in a time of need.   Now comes the time to evaluate the cigar for what it is.    The  Para Japon project got a lot of attention in the cigar world, so in my book expectations were high to deliver a very good cigar.   The great news is that this product completely delivers from a cigar experience standpoint.

From what I understand, La Aurora chief Guillermo Leon had a cigar that had been aging for three years; therefore a candidate blend was pretty much ready to be used.

I have to tip my hat to La Aurora here.   They just didn’t pull any blend out of the closet.  This one is interesting – especially from the filler perspective where it consists of Brazilian and Cameroon tobaccos.

For the Para Japon, I opted for a straight cut.  I was a little quick on the pre-light draw, but I did get a combination of earth and wood as flavor notes.  The cold draw seemed pretty generic, but it wasn’t bad.   It was time to fire this one up and see what the smoking experience would bring.

The initial draws from the Para Japon had some old school notes of oak.   After several draws, flavors of grass and herbs joined the oak notes.   A little before 10 percent into the smoke, I noticed sweet flavors had emerged.  The sweet notes had a citrus flavor that I classify as grapefruit.    I also detected some notes of cocoa in the background.

By the time I was 15 percent into this cigar experience, the grapefruit notes diminished but the Para Japon was still scoring high points in the complexity arena.  At this point the Oak notes were in the forefront with the herbal and cocoa notes in the background.

As the smoke entered its second third, the cocoa notes picked up and moved center stage while the Oak notes were significantly diminished.  The cocoa was not taking a deep chocolate flavor, but more of a bittersweet flavor – it was actually very pleasant.  I also detected hints of pepper in the background as well.

Around the half-way point of the cigar experience, the pepper came to the forefront for a short time.  The pepper flavor seemed to be a cross between white and red pepper.   After this “halftime” pepper burst, the spice notes settled back.  At the same time, the cocoa had morphed into more of a coffee flavor.   Some of the sweet grapefruit notes even found there way back into the mix.  Meanwhile, the herbal notes still did not disappear.

In the final third, the pepper and herb notes were the ones in the forefront – with the coffee notes in the background.   The flavors were excellent right until the nub.   The nub was cool, but a little soft.

It’s clear that La Aurora delivered a high quality product to support this effort.   From a burn standpoint, the Para Japon didn’t require a lot of touch-ups.   It did burn quicker than I would have expected, but it did not have a hot burn.   The draw was flawless and gets high marks in my book.

Before I lit this cigar, I expected the Para Japon to be a medium-strength and medium-bodied cigar and that’s exactly the case.   This made the most sense for this project and a cigar in this area of the spectrum appeals to the widest audience.    The nicotine won’t over-power you and it will balance very nicely with the flavor notes.

Not much more I can say – this is an excellent cigar.   I think this cigar has been marketed well from the online standpoint and it certainly lives up to expectations.   I do think this cigar needs some more promotion at the retail level because it really is a nice cigar.   Taking the cause out of the equation, this would be a cigar I’d buy a box of and recommend to others.   The added bonus that this serves a great cause makes this even better.

Disclaimer:  The cigars for this experience described in this assessment were purchased at Corona Cigar Company in Orlando, Florida.