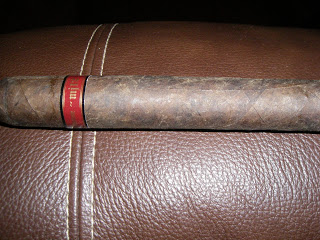 Whether it has been his original core line, or the new maduro extensions to the core line, I’ve always liked how Illusione cigars have had flavor nuances between the vitola sizes.  I compare it to macaroni – the same ingredients go into the macaroni, but put that macaroni in a different size, it has a different taste. With cigars, the sizes affect the proportions of wrapper, binder, and filler and will result in a different smoke.   With Illusione cigars, I find that each vitola almost takes on new identity.   So far my experiences with the maduro extensions to the Illusione core line have been positive.  The hl Maduro was possibly the best lancero I ever had.   The cg4 Maduro was extremely satisifying.  The 88 Maduro didn’t quite match up to the other two, but it still was a solid.  Now it was time to sample what I consider a “go to” vitola size for me – a Toro.  This one is the Illusione mj12 and this was one outstanding cigar.

Illusione founder, Dion Giolito refers to the mj12 as “the Majestic”.  When I smoked the original core line blend of the mj12, it wasn’t in my flavor profile – but still was a quality smoke.   In fairness, I could stay this about many of the original cigars in that core line.  However, Giolito’s use of the maduro wrapper has been nothing short of brilliant.   It gives the core line a whole new identity.  With the case of the mj12, it elevates the cigar to the next level.

From a packaging standpoint, Illusione has made a change.   The new maduros do not contain the white and black bands that are so identified with Illusione.  The maduros have red background and gold lettering.   The foil wrapped mj12 Maduro features a darker foil wrap than the original. The vitola names will have the same names as their core counterparts. 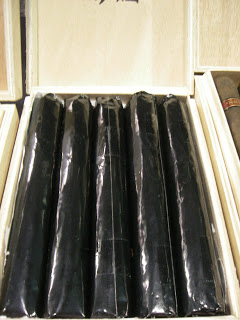 Let’s break down the Illusione mj12 Maduro and see what it brings to the table.

All of the Illusione Maduros feature a San Andreas wrapper from Mexico.   San Andres wrappers are terrific when it comes to fermenting them into maduro wrappers.  This wrapper has really fused well with the Illusione core line blend.

The Maduros don’t cover the whole core line.  In addition to the mj12, here is what else is available:

After opening the a foiled packed mj12, I placed a straight cut into the cap of the cigar.  I commenced with the prelight draw.  The notes from the dry draw of the mj12 Maduro were very similar to the cg4 Maduro and 88 Maduro – a good combination of chocolate and spice.  Like those other vitolas, I had a tough time early on pining down the spice on the dry draw.   I was now ready to fire up the mj12 and see what would come to the table.

Early on, into the smoking experience, I was able to detect the spice to be a what I call baker’s spice. Like the cg4 Maduro, the mj12 Maduro settles into a nice rich chocolate flavor early in the smoking experience.  Around 15 percent of the way into the smoke of the mj12, I detected notes of cinnamon and raisin sweetness.  These notes joined the chocolate and baker’s spice notes.

The flavors above complemented each other very well.  At the same time, each of these flavors alternated as the primary flavor note.   Eventually it seemed like early in the second third the chocolate notes succeeded in finally securing a spot as the primary flavor note.  Later in the second third, I detected some of the signature tea notes Illusione has become famous for. These didn’t play a huge role in the second half of the smoke, but nonetheless they were still there.

In the last third, like the 88 Maduro, the baker’s spice kicked it up a notch.  While the end of the cigar had some spice, it didn’t come at an expense of the chocolate, cinnamon  raisin, and tea – all of which were still in the mix.   The nub was perfect – it was cool in temperature and firm to the touch.

The burn of my mj12 Maduro was as good as it gets. It burned very sharp and required minimal touch-ups.  It burned at a ideal rate and temperature.   I also really enjoyed the draw on this cigar.  When a cigar draws well, it is a joy to smoke – and that is exactly what the mj12 Maduro brings to the table.

Like most of the Illusione core line cigars, the mj12 Maduro will not bowl you over with strength or nicotine.  The mj12 is pretty consistent with most of the other vitolas in this blend and is medium in strength (so far the hl Maduro I felt actually crossed into the medium to full spectrum for strength).  From a flavor standpoint, there was plenty of depth with the flavor notes.  This cigar easily qualified as medium to full in terms of body.   Also consistent with the other Illusione Maduros, the cigar does an excellent job at emphasizing flavor over strength.

This is the fourth vitola of this blend I have assessed on this web-site.   I have enjoyed the things each of the vitolas have had in common, and have come to appreciate what the different vitolas can bring to the table.  (I still consider the hl Maduro a really different smoke than the others in the series).   I really enjoyed the mj12 Maduro.  This is a case where the blend worked real in a toro size.  I’ve said it with the other vitolas, but that San Andreas wrapper truly works some magic on this blend.  This is a cigar that will appeal to both experienced cigar enthusiasts and novice cigar enthusiasts looking to graduate to a maduro blend.  Overall, a great smoking experience.

Source: This cigar was purchased from Empire Cigars in Raleigh, North Carolina.