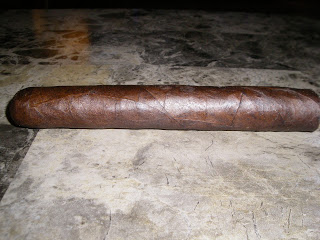 The Adrian’s CroMagnon line is a retail exclusive cigar sold exclusively through an online retailer called Hava Cigar Shop.  While many retailers have their own online exclusives, the CroMagnon seems to have developed an interesting following – perhaps more-so than any other retail exclusive blend I’ve seen.  Add to the intrigue is that this blend does not have a big name blender behind it. I figured it was time to explore what the buzz about the CroMagnon was all about.  Overall, I did find the CroMagnon a positive smoking experience.

First up, some brief background.   The CroMagnon is a joint project done by the owner of Hava Cigar Shop, Skip Martin and by an independent tabaquero named Michael Rosales.  Rosales is the founder of Adrian’s Costa Rican Cigars.  These cigars were introduced about three years ago. As per the name of the company, these cigars leverage Costa Rican tobacco in the blends.  The CroMagnon is the first of Adrian’s Cigars made in Esteli, Nicaragua.   It does not leverage Costa Rican tobacco in the blend.

Let’s look closer at the blend of the Adrian’s CroMagnon and see what it brings to the table.

The Connecticut Broadleaf wrapper provides a rich, oily look to this cigar.   It has many visible veins that look very nice against the oily background of the wrapper.  In general, the blend is intriguing as it uses a Cameroon binder and three Nicaraguan fillers.

The CroMagnon is available in five vitolas that they refer to as “The Taxonomy”.   What I like is how they are all available as parejos.  In general, I think too many cigars are made into torpedos and perfectos when they shouldn’t be, so it’s encouraging to see an all vitola offering.  Each vitola has its own unique identity.  I’ve included the SRP of each of the cigars as well.  Each of the cigars are unbanded.

For this cigar, I smoked the Cranium vitola.   When I have my choice of vitola, I always gravitate toward the big ring gauge.  In this case, I was gifted this cigar without the giver knowing my preference. I placed a straight cut into the cap of the CroMagnon Cranium and commenced with the pre-light draw.  The dry draw notes were not too exciting, but still were satisfactory – providing notes of cedar with hints of leather and chocolate.   At this point, I fired up the CroMagnon and wanted to see what else would be in-store.

The CroMagnon has a spicy start consisting of a cross between cedar and pepper. This could basically be categorized as a spice blast.  As the spice settles, it moves into the background and takes on more of a flavor of exotic spice.   At the same time there are notes of nut and earth that take over in the forefront.

About five percent into the smoking experience, I detected some coffee flavors.  The flavors of this cigar are very much layered on each other – meaning I can pick out each of the flavors individually as opposed to flavors that are ‘fused” together.  The profile of this cigar in the first third is nut as the primary note, the exotic spice as a secondary note, and the coffee/earth as tertiary notes.

The last third of this cigar saw much of the flavors that were present in the first 2/3 dissipate.  The flavors got very generic – much of the flavor was a combination of leather and some spice.  The bar was set high in the first two thirds of this smoke, but unfortunately the CroMagnon did not live up to it in the last third.  It wasn’t a bad finish, just kind of a boring one.  The cigar did not finish harsh.  It did finish with a very nice cool and firm nub.

This was a very well-made cigar and it reflected well in the construction attributes of burn and draw.  No burn issues – the burn held relatively straight for most of the smoke.  It required some touch-ups, but nothing terribly major.  The burn rate and burn temperature were ideal.  The ash was tight and white for most of the smoke.  As for the draw, there was a little tightness on it, but normally I like that.  The draw made this a was a very pleasant cigar to smoke.

From looking at the CroMagnon with its dark, oily wrapper – I expected a ton of nicotine from this.   From my perspective, it did not overwhelm me.  At the same time, it provided a nice dose of power to make this a satisfying smoke.  I assessed the strength of the CroMagnon as medium to full.   As for the body, there was some nice depth to the flavors.  There was a point I thought this would move into the full-bodied area, but this held medium to full for the majority of the smoking experience.   I thought on the last third, the strength got a little bit of an edge over the body, but for the most part – the strength and body balanced each other out throughout the smoke.

There was a lot of hype surrounding this release.  As I mentioned, it probably got more hype than any other retail exclusive cigar I’ve seen from an indie/boutique company.   The first two thirds of this cigar were very good.  I do admit, the last third was not bad, but not up to the first two thirds of this cigar.   Still I think this cigar is one I would smoke again.  I’m eager to see how this blend works in the other vitolas.  I’m not sure I would recommend this to the novice cigar enthusiast, but I can see the experienced cigar enthusiast smoking this and I’d certainly encourage one to try it.  Overall a quality smoke – and one I would like to see on brick and mortar retail shops someday.


Source: I was given this cigar at some point at the 2011 IPCPR.  I believe I can trace this back to a Drew Estate after-hours party.  I apologize in advance for not remembering who gave me this cigar.  Cigar Coop is appreciative for this sample, but in no way does this influence the final outcome of this assessment.