The Tatuaje Little Boris is an upcoming release by Tatuaje Cigars that is going to be an exclusive to Jeff Borysiewicz’s Corona Cigar Company in Orlando, Florida.  Earlier this year,  Tatuaje founder, Pete Johnson announced the “Little Monsters” series.   This series is a sampler of ten cigars consisting of two cigars that are smaller versions of Tatuaje’s annual Monster Series releases.   The Little Boris is not a part of this sampler.  It actually is a smaller version of another Tatuaje Cigar called “The Boris”. “The Boris” cigar was the first release of Tatuaje’s “Actor’s Series”.  It was released in 2009 as a tribute to actor Boris Karloff (who had his own connections to “monsters” as he played Frankenstein).   It turns out that no additional cigars were put into the Actor’s Series.   The Little Boris is expected to make its debut some time this summer, and this may turn out to be one of the most sought after cigars of 2012.   Recently, I had a chance to sample a pre-release version of the Little Boris, and not only was it a very good cigar, but it might be one of the more unique tasting Tatuaje releases I ever had.

It turns out that the original Boris (a  7 1/8 x 49 Churchill) was the only cigar that was released with the Actor’s Series.  Many have associated this with the Monster Series because it was a limited annual release done in a similar manner to the annual Monster Series releases.  I’ve mentioned before that the release of a Tatuaje Monster Series cigar is the cigar industry’s closest equivalent to when Apple Computers announces a new iPhone.  It sets off a frenzy of cigar enthusiasts to pre-order or track down where to get a box.  Many are expecting the 2012 Little Monsters Series to continue to feed this frenzy.  Given the Little Boris will be a retail exclusive, this could take the frenzy to a new level.

Let’s take a closer look at the Little Boris.  As always, pre-release cigars are done as a pre-review.  The purpose of
the pre-review is to share some experiences with the cigar.  A score and assessment rating will be given once the cigar hits Corona Cigar Company’s shelves.  One disclaimer is that this pre-review was based on a single cigar sample.  The other disclaimer I will make is that I have not smoked the original Boris released in 2009.

Our assumption here is that the Little Boris shares a similar blend composition to the original Boris.  This is what is being done with the Little Monster cigars.

While no official size of the Little Boris has been announced, from my measurements this is a corona-sized vitola that is 5 x 49.

The Tatuaje Little Boris wrapper has what I consider to be a combination of roasted coffee color and colorado red to it.  For an Ecuadorian Sumatra wrapper, this is definitely a darker shade than what I am used to.  The darker color of the wrapper does a good job at hiding it’s wrapper seams.  There are some visible veins.  I didn’t classify the wrapper as oily.   At the foot, the Little Boris has a cocoa smelling aroma. 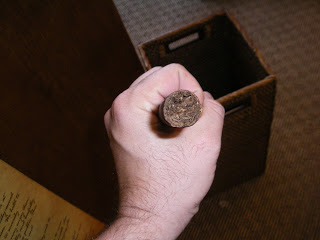 The pre-release sample I received was unbanded.   The original Boris had a black and white band.

For my sample of the Tatuaje Little Boris, I placed a straight cut into the cap of the cigar.  It Following the cut, it was time to commence with the pre-light draw.  Overall, I felt the dry draw was quite pleasing – it provided a combination of cedar spice and coffee.   With a very positive pre-light draw experience, it was time to toast the foot and see what type of smoking experience the Little Boris would deliver.

Given that Tatuaje Cigars’ are made at the Garcia family’s My Father Cigar factory, I was not surprised that I detected a pepper blast at the start of the Little Boris.  It wasn’t the strongest Garcia pepper blast I got, but it wasn’t insignificant either.   I soon detected some nut flavors.  When the pepper blast subsided, the nut flavors moved to the front and the pepper notes took on a secondary role.

Toward the end of the first third, some sweet flavors surfaced.  I categorized these flavors as more of a natural tobacco sweetness. They joined the nut flavors in the forefront and the pepper spice was what I considered to be more distant in the background.

In the second half of the smoke of the Little Boris, some of the coffee flavors that I had detected on the pre-light re-surfaced. The coffee notes played more of a secondary role, while the pepper spice was now a tertiary flavor note.  It would be the nut and natural sweetness flavors that alternated as to what was the primary flavor note.

As the cigar experience of the Little Boris came to a close,  the pepper notes finally resurfaced.  The finish was on the spicier side, but not harsh.   The resulting nub was cool in temperature, but also softer to the touch.

The construction attributes of burn and draw of the Tatuaje Little Boris live up to the great reputation of Tatuaje and My Father Cigars. The Little Boris gets very high scores in this area.  The burn line of the Little Boris was sharp from start to finish requiring minimal touch-ups.  The burn rate and the burn temperature were ideal.  The resulting ash was basically light gray to white and remained tight.

As for the draw, it was flawless – making the Tatuaje Little Boris a very enjoyable cigar experience.

The big question that many people may ask is “will this cigar be worth the frenzy that could end up surrounding obtaining it?”   This is a personal question that each cigar enthusiast needs to decide.  I can say that this was a very good cigar experience.  While I’ve gotten natural tobacco and nut flavors from other Garcia family cigars, this one from an intangible standpoint seemed a little different.   I also consider this a cigar worthy to be a retail exclusive cigar.  It’s definitely a cigar a Tatuaje enthusiast will enjoy.  It would easily be a cigar I would recommend to an experienced cigar enthusiast.  I also would consider this a good cigar for a novice enthusiast to explore a Garcia family cigar to try.  I enjoyed this cigar, and look forward to smoking it again when it is generally available.

Source: This cigar was provided by Jeff Borysiewicz of Corona Cigars. Cigar Coop is appreciative for
the sample, but in no way does this
influence this review.