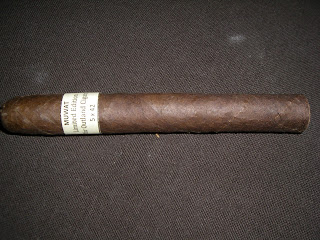 The My Uzi Weighs a Ton (MUWAT) Digital Son 6 marks the sixth vitola in the My Uzi Weighs a Ton Series.   This cigar will be a retail exclusive cigar to Outland Cigars in Charlotte, North Carolina and will be launched January 25, 2013. Cigar Coop and the Leaf and Grape web-sites were proud to be the first cigar sites announce this new MUWAT cigar.  We followed it up with an exclusive pre-release picture of the cigar.  The Digital Son 6 adds a 5 x 42 Corona vitola to the line – and incorporates a new blend.  Recently, I’ve had an opportunity to sample some pre-release samples of the Digital Son 6.  If this is any indication of the final product, this is the best MUWAT release to date.

The MUWAT line was a joint project with Drew Estate’s Jonathan Drew himself and the folks at Joya de Nicaragua.  The line was launched in 2011 with three XXL (a.k.a 60 ring gauge) sizes.  Late last year, a special retail-exclusive version of the MUWAT was given to New Havana Cigars called the MUWAT Bait Fish. This would add a much smaller (4 x 44) vitola and modified blend to the line.  Fast forward to the 2012 IPCPR and it was announced that Bait Fish would become a national offering.  It was also announced a robusto size offering in yet another modified blend called the MUWAT +11 was being launched.

With MUWAT Bait Fish becoming national, the MUWAT Digital Son 6 will become the only current retail exclusive cigar in the MUWAT line.  The original MUWAT was our #18 Cigar for 2011.  Let’s break down the Digital Son 6 and see what this cigar brings to the table.  Since these were pre-release samples, we will defer to a pre-review to provide some thoughts and perspectives of our smoking experience this cigar.  When this cigar is released, we will revisit and provide an assessment rating and score.

Blend ProfileWhen (Jonathan) Drew told us about the Digital Son 6, he explained what was different:

“..the blend is specific and distinct.  There are many elements of the EF (an internal name for a stronger MUWAT blend), but with a new leaf added from a different farm in Esteli.  Wrapper is San Andres, binder is Connecticut – just like all the other MUWAT.”

The MUWAT Digital Son 6’s San Andreas wrapper is chocolate colored with some dark spots.  In this author’s opinion, the color was actually a little “browner” than the +11 and Bait Fish blends.   The wrapper has a coarse complexion to it.  There are some visible veins, but the color of the wrapper hides the wrapper seams nicely.  There was a small soft spot or two on each sample we smoked, but nothing that would have an adverse effect on the smoking experience.

The samples we were provided did not have the official MUWAT bands.  They had a band indicating these were samples.

The MUWAT Digital Son 6 begins with a quick blast of pepper.   Once the pepper subsided the cigar settled into a combination of chocolate and leather on the primary draw with a cherry sweetness and pepper on the retro-hale.  This flavor profile held for the first half of the smoking experience.

By the midway point, the cherry sweetness and leather notes dissipated.  The chocolate notes remained as the main primary note.  The pepper spice continued to be prominent on the retro-hale.  The pepper had almost a three dimensional quality and lingered on the tongue following  the retro-hale.  At the same time, there is a creamy note that was very much present in the background.

As the smoking experience reached the final stages, the pepper and cream folded in with the chocolate notes in the forefront.   There really wasn’t a dominant flavor as the smoking experience came to a close. Of all of the MUWAT blends, this one does the best job at holding its flavor right until the end.  While there was some spice as the cigar comes to a close, there were no harsh notes.  The resulting nub was firm to the touch and cool in temperature.

The burn and draw score very well on the MUWAT Digital Son 6.  The burn line remained very sharp from start to finish requiring minimal touch-ups along the way.   The resulting ash was firm and tight with a mostly white color.  I never let the ash go beyond half an inch as I wanted to experience the flavors.   There was a slight flowering of the ash toward the end, but it still remained firm. The burn rate and burn temperature were ideal.

When I smoked the MUWAT +11, I felt that it had the best draw of all of the MUWAT releases.  There was a touch of resistance on that draw and I liked that.  With the MUWAT Digital Son 6, the draw is equally excellent.  This made the Digital Son 6 a joy to smoke.

From a strength perspective, I found the MUWAT Digital Son 6 to pack a larger punch compared to the rest of the MUWATs.  Some of this could be due to the fact that this is still a relatively young cigar, so it will be interesting to see what time will do.  I still assessed the Digital Son 6 to be a full strength cigar – the first MUWAT to fall into this category.

As for the body, there is a lot of flavor to this cigar.  While time could mellow the flavors, I also assessed the flavors to be full-bodied (also a first for my assessment of a MUWAT).  The strength and flavors balance each other very nicely with neither attribute overshadowing the other.

When the MUWAT Bait Fish first came out, I was expecting that cigar to be closer to full in terms of strength and body.  While it still was a good cigar, the Bait Fish wasn’t type of smoke for me.  The MUWAT Digital Son 6 is the cigar I was always expecting the Bait Fish to be.  Overall my favorite MUWAT frontmark was the 660 – until I smoked the Digital Son 6.  This is a fantastic cigar.  I do believe if MUWAT fans were waiting for a corona-sized vitola, this will not disappoint.  This is probably a cigar for a more seasoned cigar enthusiast as it is on the fuller side in both strength and body.  As for myself, this is a cigar I can see myself smoking again.

The cigars for this assessment were provided by the samples received by Outland Cigars.  A few hours before this went to publication, I was alerted to (and surprised by) a comment by Jonathan Drew on halfwheel.com indicating the name was a partial tribute to Stace Berkland (LeafAndGrape.com) and myself. I am truly honored by this.  I will clarify that I am not currently in an employed role by Outland Cigars, but as many people know I have served as a Humidor Consultant for them in the past.  I still have a close relationship with this shop and consider them my home cigar store.

In any event, this has not influenced this review in anyway.  I encourage everyone to smoke this cigar when it is available and hopefully the thoughts and perspectives have helped.  I believe you will truly enjoy it.