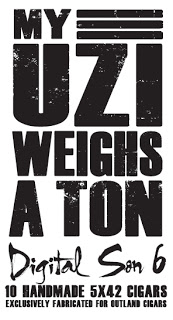 Cigar Coop is proud to jointly provide this preview with soon to launch Leaf and Grape on the following retail exclusive cigar:
My Uzi Weighs A Ton, the collaboration between Drew Estate Tobacco Company’s Subculture Studios and the Joya de Nicaragua factory has announced a sixth frontmark to their line of cigars.  The vitola is a 5 x 42 corona dubbed the “Digital Son 6” and will be packaged in 10 count packages carried exclusively by Outland Cigars in Charlotte, North Carolina.
According to Drew Estate Chairman Jonathan Drew, “As you can imagine, I am extremely excited about the 6th installment of the MUWAT frontmark.  From a brand concept that was considered unrational and raw, the brand caught the attention of consumers on two continents in an organic manner.  While you are aware that before Bait Fish was sold on a national manner, it was an exclusive for Dan (Welsh) at NHC.  Today, however, we have no exclusive sizes.  With great pleasure, I would like to announce together the release of the Digital Son 6.”
The DS-6 blend was done by Mario Lopez at the Joya de Nicaragua factory, and according to Drew, “the blend is specific and distinct.  There are many elements of the EF, but with a new leaf added from a different farm in Esteli.  Wrapper is San Andreas, binder is Connecticut – just like all the other MUWAT.”
Drew will be in attendance for a launch event which is scheduled for January 25, 2013 at Outland Cigars’ Ballantyne location.  Digital Son 6 will be sold at the event for the first time.  Outland Cigars will sell the Digital Son 6 at their Ballantyne and South Park locations – as well as via the internet.  Details will be forthcoming on a pre-sale for the 10 count packages.
When asked for comment on the MUWAT Digital Son 6, Outland Cigars owner Tom Kakadelis said, “Thanks to Jonathan and the entire Drew Estate team for their support of Outland Cigars and another expression of our friendship with the release of Outland’s first exclusive cigar with Drew Estate, Digital Son 6.”
Source: Content for this preview was provided by Drew Estate Cigars and Outland Cigars.  Update: Click here for a first look photo at the actual pre-release of the MUWAT Digital Son 6