The blend is being offered in three sizes – a robusto, toro, and torpedo.  At the Trade Show, Iconic Leaf Cigar Company will unveil the Recluse Draconian Sidewinder – a size never done in history.  Nothing about this new shape will be revealed until the first morning of the IPCPR convention in Las Vegas.

Back in March, we had an opportunity to smoke a prototype of the blend.  According to a press release received by Cigar Coop from Iconic Leaf: “The Draconian blend is an almost complete departure from our highly acclaimed Recluse OTG blend.  The blend is offered initially in three box pressed sizes which are robusto, toro and 6 x 60 and the msrp is $7.25-$9.50 for these initial sizes.” 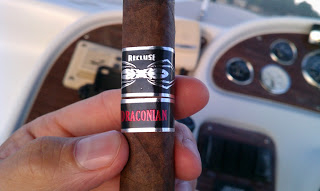 As mentioned above, the Recluse Draconian will be available in the following box-press shapes: robusto, toro, and 6 x 60.  In addition, there will be the three unique shapes of the Sidewinder vitola.

Source: Information for this story was provided in a press release sent to Cigar Coop by Iconic Leaf Cigar Company.