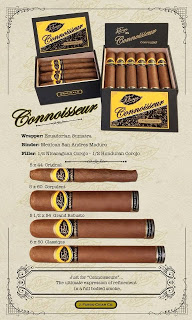 At the 2013 IPCPR Trade Show in Las Vegas, J. Fuego Cigar Company will officially launch the J. Fuego Connoisseur.  This cigar has been anticipated for several months.  This cigar back  was first reported on a video interview on the Cigar King blog.

J. Fuego Cigar Company is a company run by Jesus L. Fuego.  The Fuego family has a five generation history in the cigar business that originated in Cuba.  The Fuego family left Cuba in 1995 and landed in Central America.  Jesus Fuego worked as a grower and blender for many other companies before setting out on his own and founding Tabacos S.A.  This would launch the J. Fuego brand.  Recently Fuego rebranded the company J. Fuego Cigar Company.

At a glance, here is a summary of the J. Fuego Connoisseur.

The J. Fuego Connoisseur will feature a multi-national blend with tobaccos from four countries:

The J. Fuego Connoisseur is being launched in four sizes: