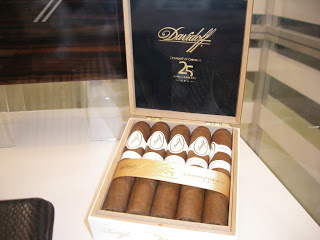 The cigar was also given to attendees of the 2013 Davidoff Golden Band Awards banquet.

The 7/30/13 Cigar Insider published some additional details on this cigar.  We include this information below.

The Davidoff 25th Anniversary is a Dominican puro.

The Davidoff 25th Anniversary will be a limited production cigar available in one size – a 5 x 56 robusto.  The price point is being reported as $22.00.