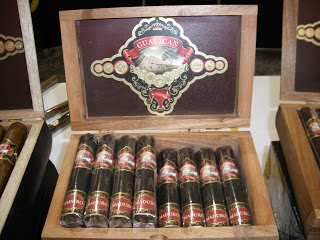 Guayacan Cigars launched its second cigar blend at the 2013 IPCPR Trade Show.  This cigar is a maduro offering and is known as the Guayacan Maduro.

Guayacan Cigars is a new company in the cigar scene.  The company was founded by a gentleman name by Noel Rojas.  The cigars are produced in Esteli, Nicaragua where Rojas owns his own factory.

In September of 2012, Guayacan Cigars entered into an agreement for Emilio Cigars to handle their distribution.  Late last year, the first Guayacan Cigar was launched called Guayacan – containing an Ecuadorian Habano wrapper.

At a glance, here is a look at the Guayacan Maduro

The Guayacan Maduro is being launched in four sizes.  These differ from the Guayacan Habano offering.