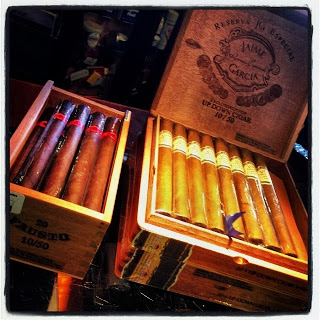 Up Down Cigar, a retailer based in Chicago, Illinois will be receiving a limited production, exclusive size of the Jaime Garcia Reserva Especial Connecticut Shade.  This blend has previously only been released in the New England area.  The size is a new one for the blend –  The size is a 6 3/8 x 43 lonsdale.  My Father Cigars Vice President of Sales Jose Ortega posted a picture of the cigar on Facebook and Janny Garcia confirmed information to Cigar Coop.

There will only be 200 boxes produced. In addition, there is simultaneously a 10/50 vitola being produced by Pete Johnson in Tatuaje’s Fausto line for Up Down Cigar.

At a glance, here is a look at the Jaime Garcia Reserva Especial Connecticut Shade Cigars