Over the past month, the Camacho Liberty 2013 edition has arrived at retailers.  The Liberty series is an annual release by Camacho Cigars. Each year for the Liberty Series, Camacho puts forward a different blend and may vary the size.  There is a limited allocation of these cigars and once the cigars are gone, they are gone.  One thing that distinguishes the Camacho Liberty series is that each cigar is packaged in an individual coffin-box.  This year’s release came in October (a little later than the normal summer release).  With the Camacho Liberty 2013, this year’s edition follows suit with the “Bold Standard” packaging introduced earlier this year as part of the re-branding of the line.  Overall I found a quality smoke and a one that also fits in with the company’s “Bold Standard” in terms of the smoking experience.

The background is that the Liberty Series made its debut in 2002, and for the most part it has been one size, one vitola (the initial Liberty Series 2002 did come in 5 sizes, the 2004 edition came in two sizes).  Since then blends vary, the cigar experience can vary.  In 2010, we ranked the Camacho Liberty as our #9 cigar of the year.  Let’s break down the Camacho Liberty 2013 and see what this cigar brings to the table:

Blend Profile
While last year’s Camacho Liberty 2012 was a Authentic Corojo puro, this year the Liberty 2013 returns to a multi-national blend.

Wrapper: Habana 2000Binder: NicaraguanFiller: Honduran, Nicaraguan, Dominican
Vitolas Available
The cigar will be launched in one size – a 6 x 40/54/40 figuardo.  The cigar is similar 11/18 sized figuardo found on previous Liberty releases.  As mentioned each Liberty 2013 is packaged in an individual coffin box.

The Habana 2000 wrapper to the Camacho Liberty 2013 has a medium brown color.  There is a slight oily sheen on the surface of the wrapper.  The wrapper itself is slightly bumpy.  There are a few visible veins and a few visible wrapper seams.

Each cigar is packed in an individual coffin.  The cigar itself is wrapped in tissue paper.

Like many of the previous editions of the Liberty Series, the coffin box is painted on the side with the sliding top.  For 2013, the color of the paint is Black.  This year’s box uses a “bold standard” design”.  The name LIBERTY SERIES is on the center of the top in silver font surrounded by a silver line over it and below it.  To the left is “2013” in a modern silver font.  To the right of is the Camacho scorpion logo in a pentagon. On the side of the box there is a sticker indicating this is the 2013 Liberty Series with the number of the cigar in the series. (The picture above says 6,852 out of 40,000).

The band to the Camacho Liberty 2013 uses the new “bold standard” style design – a radical departure from previous Liberty releases.  It is a black colored band with silver font.  At the top of the band it says “INFAMOUS SINCE 1962” in small font.  Below that is “CAMACHO” in the “bold style” font.  Below that it says “BUILT BOLD” in a smaller font.  There is a grid pattern below that. On the left side of the grid it says “LIBERTY SERIES” in large font. Below that it says “2013” surrounded by “HAND” and “BUILT” to the left and right. On the right side of the grid is the Camacho scorpion surrounded by a pentagon.  The remainder of the band has silver striping and silver dotted lines.

There is a secondary band that says is also black with silver font.  On it, it has the slogan “FREEDOM IS NOT FREE”.  There are also silver adornments on that band.

For my cigar experience of the Camacho Liberty 2013, I went with my usual selection of a straight cut. Once the cap was clipped I proceeded with the pre-light draw phase.  The dry draw notes provided a mix of natural tobacco, floral, and cedar notes.  While the Liberty 2013 was covered in tissue paper, it was clear some of the cedar flavor came from the wooden coffin.  Overall I considered the pre-light draw to be satisfactory.  At this point, I was ready to remove the footer band, light up the Liberty 2013 and see what the smoking phase would bring.

The start to the Liberty 2013 had a mix of black pepper and grass notes.  The pepper could also be detected through the nasal passages on the retro-hale.  As the cigar moved through the early stages, some wood notes also surfaced joining the grass flavors in the forefront.  The spice transitioned to more of an exotic pepper spice and moved in the background.  There also was an underlying natural tobacco flavor in the background.  This particular natural flavor did not have much of a sweetness to it but provided some good counter flavors to the other notes.

In the second half, the grass notes transitioned to more of an earthy quality.  I also detected an increase in spice in the second half.  I found the Liberty 2013 to be a combination of wood, earth, and spice right until the end.  There were no harsh notes as the cigar experience came to a close.  The resulting nub was cool in temperature and slightly soft to the touch.

Overall I found the Camacho Liberty to have a very good burn and any negatives were very minor.  For the most part the burn line remained straight with an occasional bit of jaggedness, but no significant unevenness.  While there was some slight flowering of the ash early on, the ash remained firm from start to finish.  The ash was also mostly white in color.  The burn rate and burn temperature were ideal. 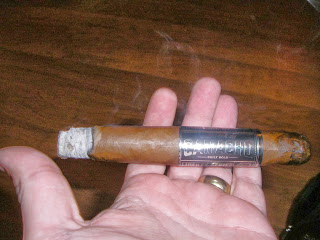 There was one thing that came to mind as I smoked the Camacho Liberty 2013 – “Davidoff”. There were a lot of Davidoff-esque qualities from a flavor standpoint.  The difference was that this was definitely something stronger and fuller than I have come to expect from a Davidoff.  In fact the Liberty 2013 reminded me of something like “the bold standard meets Davidoff”.  The question in my mind is whether or not the Camacho Liberty 2013 will lose some of its strength and body over the next dew months.

The Camacho Liberty carries an SRP of $17.00.  While I do not factor in price into the final scoring, I mention this for informational purposes to the consumer.  Overall, because of its strength, I’d probably recommend this more to a seasoned cigar enthusiast – and probably one that enjoys Davidoff.  As for myself. while this was not a cigar in my flavor profile, it certainly still was a good cigar.  I’d encourage you to try one.