There are two interesting things about the Year of the Horse release. First up, it is a 6 x 60 and this is believed to be the first Davidoff to be released in this size. Secondly, the cigar uses the Dominican Yamasa region. This is a wrapper that Davidoff has used on several limited edition cigars this year including the Davidoff of Geneva 25th Anniversary, Davidoff Masters Edition 2013 Club House Toro, and the Davidoff Golden Band Awards 2012.  This particular cigar’s wrapper is said to have been fermented longer to give it a darker color.

It was actually first noted in June by Davidoff North America President Jim Young on Kiss My Ash Radio about the forthcoming Year of the Horse cigar.

As we reported from the IPCPR Trade Show, the cigars will be packaged 9 per box and carry an SRP of $31.00 per cigar.  It is reported that 5,000 boxes have been made.  Retailers have been told to expect shipments in the December timeframe. 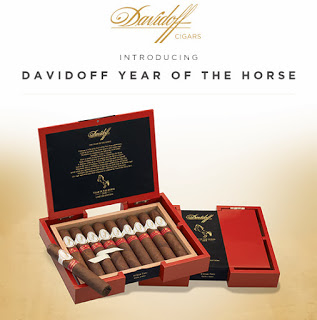 At a glance, here are details around the Davidoff 2014 Year of the Horse:

While the blend details have not been officially confirmed, this is what is being reported to retailers: