Prior to the 2013 IPCPR Trade Show, Iconic Leaf Cigar Company announced their cigar line of cigars, the Recluse Draconian line. While there was an early release to select retailers, three vitolas called “Sidewinders” were kept under lock and key until the trade show actually opened.  The concept behind the Sidewinders combines the best of a rounded cigar and a box-press cigar. Iconic Leaf has referred to this as a “side press” cigar.  It is rounded on the top and bottom, but box-pressed along the sides.  It also has a tapered tip at by the cap.  Recently I’ve had a chance to smoke one of the sizes – the Sidewinder #1.  Prior to the IPCPR Trade Show, we named Iconic Leaf Cigar Company one of our 2013 Five Boutiques to Watch.  We did this because  Iconic Leaf Cigar Company has been doing some nice things over the past year.  Without a doubt, the Recluse Draconian Sidewinder is at the head of the pack in terms of what the company has released.

One interesting by-product of the architecture of the Sidewinder is that the cigar does not require a cutter to remove the cap.  The side press design allows for the cap to be removed by squeezing the sides.

Back in March, I had an opportunity to smoke a pre-release of the Recluse Draconian blend. While the blend components were similar, it was in a parejo-shaped robusto.  This is a size that differs from what was released as the Draconian is currently only available in traditional box-press or Sidewinders side-press. Our assessment was positive of the pre-release Recluse Draconian and it gave a good look at what was to come.  After sampling this blend in the Sidewinder frontmark, there is no question in this author’s mind – this cigar has been taken to another level.  Let’s take a closer look at the Recluse Draconian Sidewinder and see what this cigar brings to the  table.

The wrapper’s origin is described as Ecuadorian Maduro. The binder is proprietary while the filler contains a unique leaf called “Iconic Leaf Ligero” developed for Tabaclera Leyendas Cubanas – the factory that makes Iconic Leaf Cigars.

All of the Recluse Draconian Sidewinders vitolas are a 57 ring gauge in the side-press design. The remaining three vitolas are a traditional box-press

As mentioned for this assessment, I smoked the Sidewinder #1. The Recluse Draconian Sidewinder #1 has a medium brown colored wrapper with a slight tint of colorado red to it. The wrapper itself has some oil on the surface. There are some visible wrapper seams and visible veins.

There are two bands on the Recluse Draconian Sidewinder. The first band is identical to what was found on the original Recluse blend. It has a black background with silver trim. Prominently displayed on the band is the Recluse spider logo. Above the logo is the text “RECLUSE” – also in silver font.

There is a secondary band is unique to the Draconian line. It is also black with silver trim. On that band is the text “DRACONIAN” in red font. There is also a red ribbon on the footer that is unique to the Sidewinder vitolas.

I broke with tradition here. I did not go with my usual selection of a straight cut. Instead I squeezed the sides and the cap easily came off. I was actually surprised how easy it was to do. I then moved on to the prelight draw. The dry draw notes provided a mix of leather, coffee, pepper spice, and cream. Overall I considered the pre-light draw to be excellent. At this point, I removed the ribbon from the footer and was ready to light up the Sidewinder and see what the smoking experience would deliver.

The start to the Recluse Draconian Sidewinder #1 started with similar notes that I got from the pre-light draw. As the flavor profile took form, the coffee notes moved to the forefront while the spice and cream notes settled in the background. The coffee transitioned to more of a chocolate note. On the retro-hale I was picked up some pepper spice.

Later in the first third, the spice became more of a baker’s spice. There was somewhat of a sweet quality to this spice. The sweetness also transitioned to the retro-hale as I picked up some subtle cinnamon notes with the pepper on the retro-hale.

In the second half, the baker’s spice increased and toward the latter part of the second third, it came close to the chocolate and cream. When the Draconian Sidewinder entered the last third, the chocolate became more earthy and the baker’s spice reverted more to a black pepper. Overall, the end of the cigar was flavorful and not harsh. The resulting nub was ideal – cool in temperature and firm to the touch.

The burn of the Sidewinders #1 was low maintenance. The burn line remained relatively straight and required minimal touch-ups. The resulting ash was tight and firm. It has a nice salt and pepper color to it. The burn rate and burn temperature were ideal. 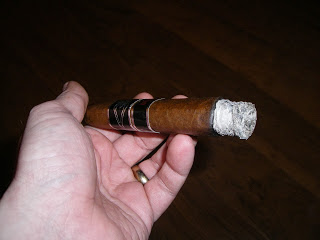 Iconic Leaf Cigars prides itself on using the entubado method for achieving a flawless draw.  I can tell you this cigar lives up to expectations here.  This was a very enjoyable cigar to puff on.

Since I started smoking the pre-release samples of the Recluse Draconian, I felt this blend had a lot of potential.  With the Recluse Draconian Sidewinder, this is what I have referred to in other assessments as “the perfect storm” – in other words this is a case where the right blend comes together with the right vitola.  I have found the Sidewinders vitolas adds an additional dimension in terms of creating a creamier flavor as opposed to the box-press version.  This is a case where I would recommend this cigar to either a novice or experienced cigar enthusiast.  As for myself, the Recluse Draconian Sidewinder is a cigar that I will not only smoke again, but one I’d recommend a box purchase of.