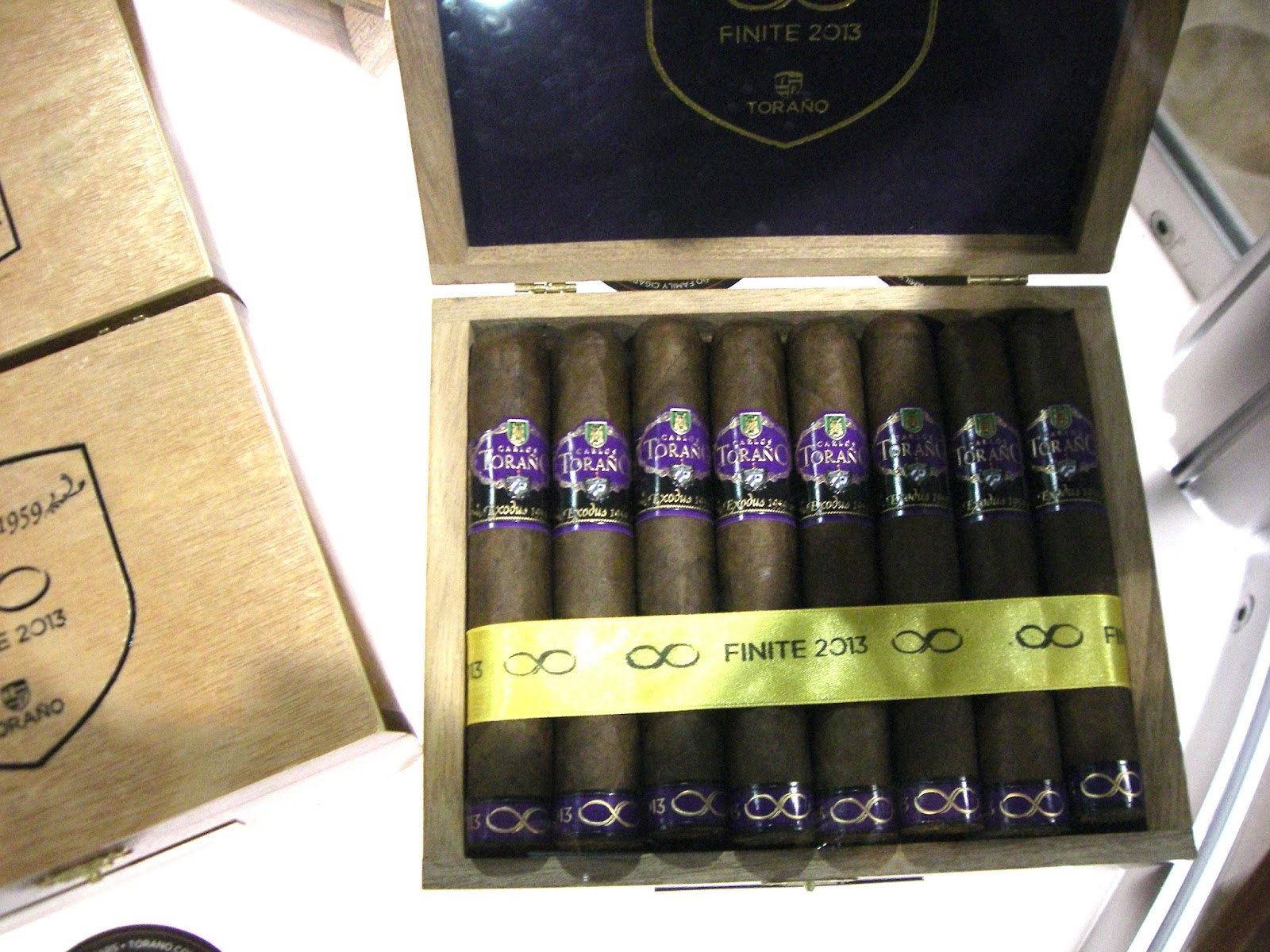 The Torano Exodus 1959 Finite 2013 was one of two new releases by Torano Family Cigars launched at the 2013 IPCPR Trade Show.  The Finite 2013 would become the fourth installment of Torano’s Exodus line of cigars. According to company President Charlie Torano the Exodus line “…commemorates the legendary Cuban cigar families’ 1959 flight to freedom. The Toranos were one of those families.”  This would become the first installment in the Exodus line since 2009’s Torano Exodus 50 Years (i.e. Copper label). The Finite 2013 also is special because it is a limited edition release – something that Torano Family Cigars has not been known to.  Recently, the Torano Exodus 1959 Finite 2013 has made it to retailer shelves and I’ve had the opportunity to smoke this cigar.  Overall, this cigar is definitely a winner and easily moves to the top of the ranks of Torano Family Cigar releases.

The Finite 2013 becomes the first release in the Exodus line in four years.  The Exodus line was launched in 2001 by Torano  with the release of the Exodus 1959 (better known as the gold band). This was followed up in 2002 with the Exodus Silver Edition.  Seven years would pass before the trilogy was completed with the Exodus 1959 – 50 Years (Copper Label).
In terms of Torano Exodus 1959 Finite 2013, Torano Vice President of Sales and Marketing Bruce Lewis when the press release was made, “Finite is a word which perfectly defines the nature of this new release.  Based on the limited availability of the tobaccos we have incorporated in the blend, we knew we would only be able to make around 75,000 cigars. We have also created a unique symbol and date stamped every box, distinguishing features which will become synonymous with future limited releases under the Torano brand.”


Although the wrapper and binder are both grown in Nicaragua’s Jalapa region, the wrapper is shade-grown viso and comes from a higher priming, whereas the binder is sun-grown seco and is among the first leaves picked.  This blending gives the medium-bodied Finite its well-balanced character, one that hints of roasted nuts, complemented by a raisin-like sweetness.  The finish is long and features a cedar note.Wrapper: Jalapa Habano Seed VisoBinder: Jalapa SecoFiller: Esteli, Condega, and OmetepeVitolas AvailableThe Torano Exodus 1959 Finite 2013 is available in three sizes:Robusto: 4 7/8 x 52Toro: 6 1/4 x 52BFC: 6 x 60

For this cigar experience of the Torano Exodus 1959 Finite 2013, I went with the Toro size vitola. The Jalapa Habano wrapper is an oily one.  It has a chocolate color to it and there is some darker marbling that can be seen on the surface.  There are some visible veins, but the dark color does a good job at hiding the wrapper seams.

An interesting thing is that the Finite 2013 goes back to the old Carlos Torano style band that was used in the days before the company was rebranded Torano Family Cigars.  This maintained continuity with the rest of the Exodus 1959 line  The band has a purple and black background. It features the text “CARLOS” in gold font with the text “TORAÑO” in larger gold font below it – both sitting on a purple field.  There is a gold and green shield above the text while there is a green and blue shelf below the text.  A gold wreath-like pattern surrounds the front of the band.  The outer and lower part of the band is black.  The gold footed text “EXODUS 1959” sits on the black background on the lower part of the band. There is also gold and purple trim on the lower part of the band.  Finally the left and right side of the band has gold medallions adorning it.

As I normally do before lighting up, I placed a straight cut to remove the cap.  Once this task was completed it was time to move on to the pre-light draw of the Torano Exodus 1959 Finite 2013. The dry draw note provided some of the raisin sweetness and cedar spice that Lewis had described above.  I also detected some notes of coffee.  Overall this was an excellent pre-light draw.  At this point, I was ready to remove the footer band of the Finite 2013, light up this cigar, and see what the overall smoking experience would bring.

The start to the Torano Exodus 1959 Finite 2013 provided some notes of pepper and coffee.  I immediately detected the pepper notes on the retro-hale.  It didn’t take long for some of the raisin notes I had on the pre-light draw to surface.  The raisin notes had a lingering effect on the tongue. By about the five percent mark the raisin and pepper notes had a slight edge over the coffee and earth notes.

By the end of the first third, the earth notes took on a grainy quality joining the raisin and pepper notes up-front.  The coffee notes remained in the background.

The raisin sweetness made a transition around the mid-point.  The sweetness dialed back slightly and took on more of a wine-like sweetness.  This sweetness was not an infused variety and very much had a tobacco feel to it.  The pepper notes also began to take on some cedar qualities. The grain notes were now in the background with the coffee notes.

The last third saw the pepper/cedar spice join the wine sweetness up-front.  I found the grain and coffee notes to significantly diminish.  This is the way the flavor profile held until the end.  The cigar had some spice at the end, but was not harsh.  The resulting nub was a real finger burner – firm to the touch and cool in temperature.

The Torano Exodus 1959 Finite 2013 scores extremely well when it comes to its burn and draw. The burn line remained straight from start to finish – requiring minimal touch-ups along the way. The resulting ash was tight with a bright white color to it.  The burn rate and burn temperature were both ideal. 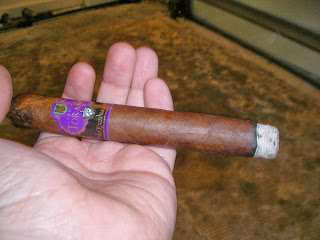 The draw to the Finite 2013 was ideal.  It was not too tight and not too loose.  This made the Torano Exodus 1959 Finite 2013 an enjoyable smoke from start to finish.

For the most part I have found many Torano Family Cigars to be in the medium/medium+ cigars in terms of strength and body.  I did find that the Finite 2013 to be fuller in terms of these attributes. From a strength perspective, while I didn’t find the Finite 2013 to be a nicotine bomb, I still found it had enough strength to be a medium to full strength cigar.  As for the body, the flavors had some nice weight on the pallet.  I assessed this cigar to be a full-bodied smoke.  When looking at strength versus body, I definite found the body to have the edge on the Finite 2013.

The purple band presented an interesting paradox in my mind.  Despite the fact that Lewis had mentioned the Finite 2013 had raisin sweetness, I wondered if the color was playing on the power of suggestion on my mind in terms of the wine and raisin notes.  On the other hand, I was wondering if these notes were the reason why the band was purple.  In any case, I really found this cigar to have a unique flavor profile.  There was some excellent complexity and balance to the flavor profile, and of course this was a well constructed cigar.  I’ve found this particular Torano release to stand head and shoulders above many of the others.  This is a cigar I’d recommend to a novice enthusiast who might want something a little stronger and a little fuller.  Experienced cigar enthusiasts who like some sweetness will enjoy this cigar.  As for myself, not only is this a cigar I would smoke again, but it’s a box worthy cigar in my book.  It’s one that I definitely recommend checking out.