Recently, Global Premium Cigars has announced that lancero line extensions are coming to the 1502 Emerald, 1502 Ruby, and 1502 Black Gold lines.  These tree lines have helped Global Premium Cigars become one of the more successful brands. Global Premium Cigars founded by Enrique Sanchez Icaza.  The company is based in Nicaragua and focuses on primarily Nicaraguan-based blends.  The company is one of the brands distributed by House of Emilio.  The 1502 gets its name from the year that Christopher Columbus first landed in Nicaragua. In terms of the new lanceros, these are special because they are box-pressed – something that is not commonly found in the cigar marketplace.  Today, we look at a pre-release of the 1502 Emerald Lancero.  Overall, we have found the 1502 Emerald to be an excellent line – and the lancero vitola will certainly strengthen the line even more.

The 1502 Emerald as a whole is an all box-press line.  The lancero keeps true to the roots of this line and is also a box-pressed.  This lancero is a box-pressed lancero that measures 7 x 38.  This is often a more difficult cigar to roll, so as a result there are not many box-press lanceros in the cigar market.

Let’s explore the 1502 Emerald Lancero and see what this cigar brings to the table. Since this was pre-release sample, we will default to our pre-review format to share our thoughts and perspectives. At a later point, following the release of this cigar, we will provide an assessment rating and score.

The details of the blend components are high level.  According to the 1502 web-site, the Emerald contains “Corojo Habano de Nicaragua, long fillers from San Andres – Mexico and fields from Esteli and Condega in Nicaragua.”

The 1502 Lancero has a medium brown wrapper with a touch of colorado red in the tint. There is a slight amount of oil  There are also some dark spots on the wrapper.  There are a few veins and a few visible seams.  As for the box-press, the 1502 Emerald is well-packed with no soft spots.  The footer features what is Sanchez calls a “cigar lock” – which is a partially covered foot.  The “cigar” lock is something found on many of Sanchez’s cigars.

As I normally do, I began things with a straight cut.  Once the cap was successfully clipped, I moved on to the pre-light draw.   The dry draw of the 1502 Emerald Lancero provided a sweet natural tobacco flavor with just a touch of spice.  Overall, I considered the pre-light draw of the 1502 Emerald Lancero to be excellent.  At this point, I was ready to light up this lancero and see what the overall cigar experience had in store.

Overall I did find some common flavor notes between the 1502 Emerald Lancero and some of the other vitolas I smoked.  At the same time, I found the lancero to deliver its own story in terms of its flavor profile.

The start to the 1502 Emerald Lancero had a mix of spice and natural tobacco.  The spice seemed to be a cross between black pepper and cedar.  This pepper/cedar spice was also prominent on the retro-hale throughout the smoking experience.

By about the five percent mark, some coffee notes entered the equation.  This was soon followed by some chocolate notes.  Both of these notes were secondary notes early on.  At the same time the natural tobacco and spice remained the primary note.  It was around this time I detected some citrus.  At times I did find this citrus a little acidic.

As the cigar progressed through the first third and second third, the natural tobacco, coffee, and chocolate notes alternated as to which was the primary flavor.  The cedar/pepper spice was still prominent – especially on the finish.  I also found the citrus got less acidic and developed some sweet qualities, but it remained more of a secondary note.

On the last third, I definitely found more in the way of spice.  The citrus sweetness got a little more prominent.  The natural tobacco notes also remained, but I found the coffee and chocolate notes to have pretty much dissipated.  This is the way the cigar experience closed. The resulting nub was cool in temperature and firm to the touch.

Overall I was very pleased with the way this box-pressed lancero burned. After initially toasting this cigar, it was literally “set it and forget it”. The burn line remained straight and required minimal touch-ups along the way. The resulting ash had a mostly bright white color and was tight and firm. The burn rate and burn temperature were both ideal. 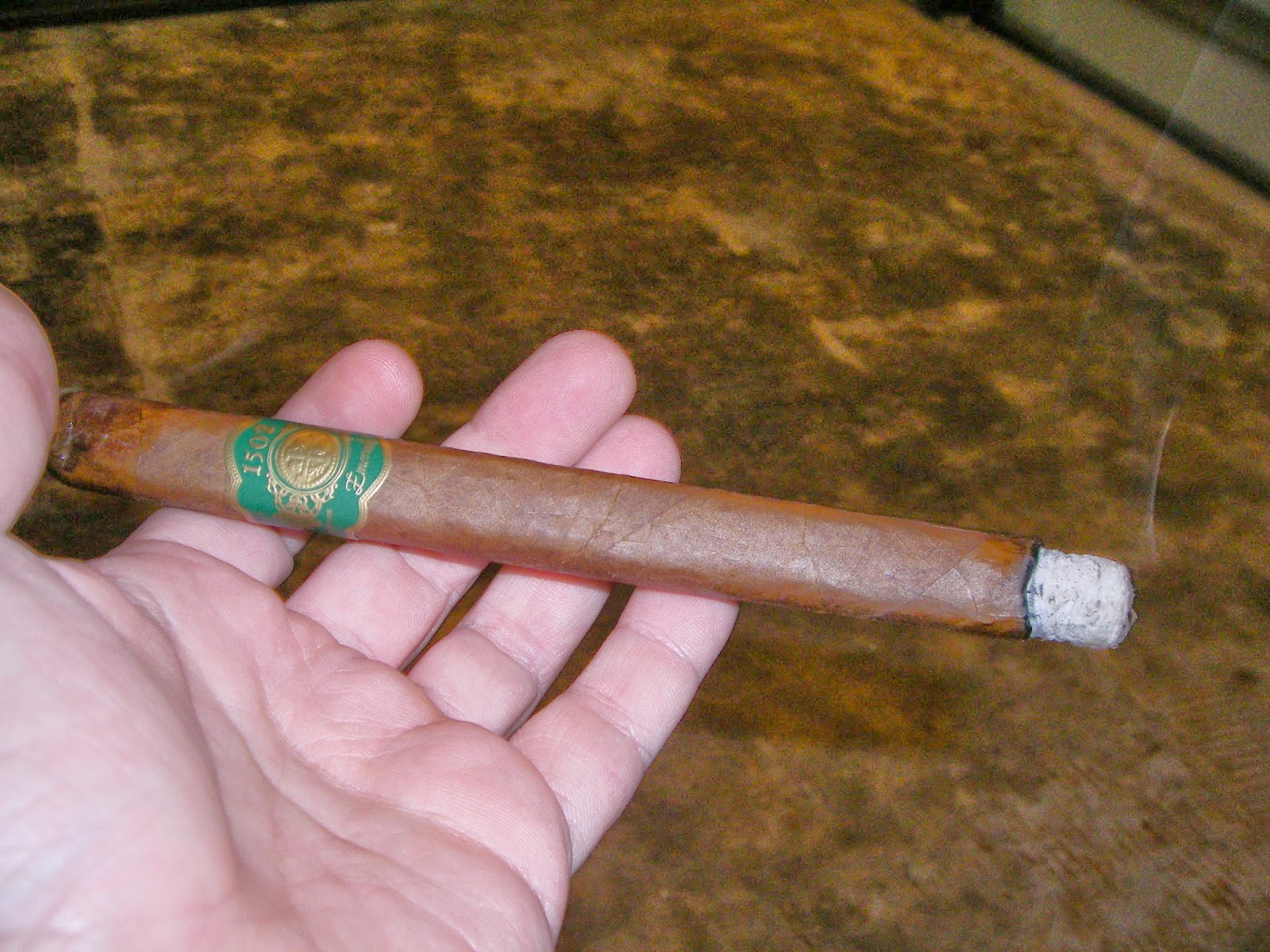 The draw was outstanding.  I found this draw to not be too tight and not be too loose.  This made the 1502 Emerald an enjoyable cigar.

I’ve heard many refer to the 1502 Emerald as a milder blend.  I’ll be honest, I do pick up a little more in the way of strength on this cigar line for whatever reason.  The 1502 Lancero started out medium strength, but in the second half, I did notice a subtle increase in the strength and to me.  While it still remained medium strength, it came pretty close to medium to full inn my book.  The depth of the flavors also started out medium-bodied.  There is a gradual increase in the weight of these flavor on the pallet.  By the second half, the 1502 Emerald Lancero moved into medium to full-bodied territory.   Overall, I found the balance of strength and body to be very close, with perhaps a slight edge for the body.

When it comes to lanceros, many people know they are not one of the better selling vitolas.  At the same time, the people who do purchase and embrace lanceros are probably the most passionate of all cigar enthusiasts.  I sometimes think there is way too much hype around a lancero release – and many often disappoint.  In the case of the 1502 Emerald Lancero, this is one lancero that is going to deliver an excellent cigar experience. This should also keep many 1502 Emerald fans happy.  I still don’t know why I pick up more strength and body on this cigar than many others, but in the end it’s an enjoyable cigar.   This is the kind of cigar I could easily recommend to both the novice or experienced cigar enthusiast.  As for myself, this is definitely a cigar – and a vitola I would smoke again.

Price: n/aSource: Sample Provided by Manufacturer (*)
Stogie Geeks Podcast: Stogie Geeks Episode 90 (Perfecto)
Stogie Feed: 1502 Emerald Perfecto
* The cigar for this Assessment Update was provided by Global Premium Cigars. The samples were received in order to provide feedback.  Cigar Coop is appreciative for the samples, but in no way does this influence this write-up.