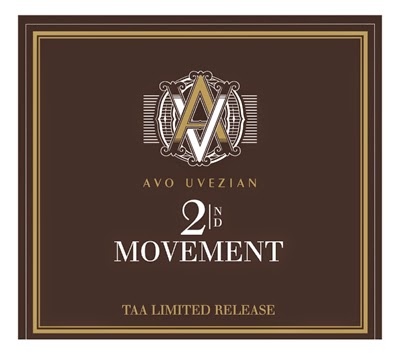 Several retailers have reported that the Avo 2nd Movement TAA Limited Release have begun to arrive.  The Avo 2nd Movement marks the second consecutive year that Avo Cigars has made available an exclusive release to the Tobacconists Association of America (TAA).

The name also pays homage to brand ambassador Avo Uvezian’s roots in the music industry as a “movement” is a musical component that part of a larger musical performance that can stand on its own.  A 2nd movement typically follows a first movement when played in succession.

In 2013, the Avo Movement TAA Limited Release was released.  This marked the first box-pressed cigar by Avo Cigars as well as the first TAA release.  The cigar finished as the Cigar Coop #5 Cigar of the Year for 2013.

The Avo 2nd Movement is one of eight cigars in the 2014 TAA Exclusive Series.  Other offerings include Crowned Heads, H. Upmann, La Flor Dominicana My Father, Padron (released 2 – a natural and maduro offering), and Tatuaje.

At a glance here is a look at the Avo 2nd Movement: