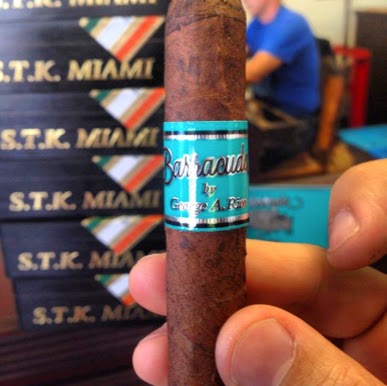 Gran Habano cigars will be adding a maduro counterpart to its limited edition Barracuda line.  The S.T.K. Miami Barracuda, like its Habano counterpart will be limited in production.  The new maduro will make its debut at the 2014 IPCPR Trade Show.

The S.T.K. Miami Barracuda will be made at owner George Rico’s G.R. Tabacaleras Co. Cigar Factory in Little Havana, Miami.  The maduro offering will feature a Pennsylvania Broadleaf wrapper – which is said to be a favorite of Rico’s.  The internal blend was tweaked for the maduro for balance.

Production will be limited to 200 boxes per size. The price point will be between $7.50 and $8.50 depending on the size.

The cigar derives its name from company owner Rico and where the cigar is made (Miami). S.T.K. stands for “Stay True Kid” and has typically been the moniker for several blends coming out of Rico’s Little Havana factory.  It joins other blends in the S.T.K. line including the Barracuda (Natural), Zulu Zulu, George Rico S.T.K. Miami American Puro, and Opium lines.

At a glance, here is a look at the S.T.K. Miami Barracuda Maduro:

Like the Barracuda Habano, the S.T.K. Miami Barracuda Maduro will come in three sizes.  These are close to the what come in the Habano line, but the Robusto has a slightly bigger ring gauge.